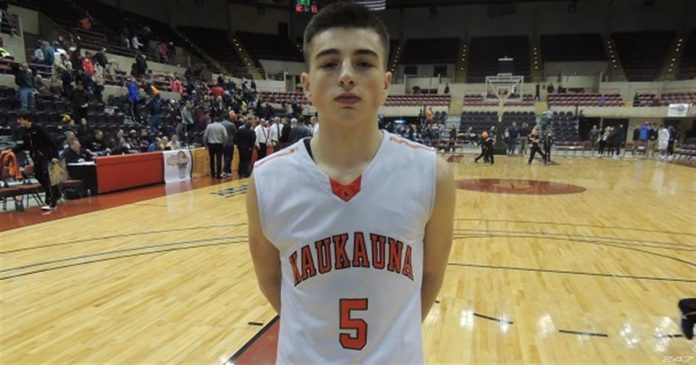 This year’s signature series is devoted to small school basketball.  However, that doesn’t mean it has small talent.  Kaukauna features ball-handling and scoring wizard Jordan McCabe, heading to West Virginia while Mars features Rob Carmody, a sweet shooting guard heading to Notre Dame.  Seeing as Kaukauna is playing a team from “outer space”, will this be a live version of Space Jam?

Mars’ Andrew Recchia scored the game’s first four points, a mid-range jumper and a floater.  Kaukauna responded with a bucket inside from Dylan Kurey and then a three from Eric Carl to take a 5-4 lead.  A driving layup from Rob Carmody and a three from Cade Hetzler gave the lead back to Mars.  Luke Etiing scored inside for Kaukauna to get them back to within two.  Rob Carmody scored twice for Mars, pushing their lead to 13-7.  McCabe finally got into the game with a long jumper from just in front of the arc but then Mars pushed their lead to ten after two free throws from Hetzler and a pair of baskets from Brandon Caruso.  With just under three minutes to play, Mars looked in control with a 19-9 lead.  However, that would be their last points of the quarter as McCabe hit a trio of threes, scored on a drive, and then fed Jacob Newhouse inside for a 16-0 run to make the score 25-19 Kaukauna after one quarter of play.

Logan Jedwabny extended the Kaukauna lead with a three to open the second quarter.  Rob Carmody scored on a drive and Caruso knocked down a three to get Mars back to within four.  McCabe then erupted for five straight points to make the score 33-24 in favor of Kaukauna.  Hetzler hit a three for Mars but then Kaukauna answered with a three from Keaton Ferris and one from McCabe.  Mars got the margin below double digits as both Rob Carmody and Caruso each hit a pair of free throws to make it 39-31.  McCabe then hit a three and then two free throws to extend Kaukauna’s lead.  Connor Amsler hit a three to cut it down to nine.  However, Kaukauna hit the last five points of the half to finish with a 48-34 half-time lead.

Keaton Ferris scored in transition for Kaukauna to build their lead.  Mars hit a three but Ferris answered that with a three.  Another three from Mars, this one by Hetzler and a mid-range jumper from Recchia got Mars to within 53-42.  McCabe struck again with a three and Ferris also hit from beyond the arc to push the lead to seventeen at 59-42.  Carmody converted a three point play for Mars but a bucket inside and a free throw by McCabe extended Kaukauna’s lead.  Mars (rather Carmody) then made a run, scoring seven unanswered points to get within ten at 62-52.  McCabe drained a three for Kaukauna but Carmody answered right back with a driving score.  A mid-range jumper from Ferris ended the scoring for the third which found Kaukauna up by thirteen at 67-54.

McCabe scored the first bucket of the final period which Carmody answered.  When Kaukauna’s Kurey put back a miss, they were up fifteen and looked in complete control, up 71-56 with seven minutes to play.  Mars wasn’t done.  They put together a 14-5 run as Hetzler hit a trio of threes and Carmody contributed five points.  Now with just over four minutes to play, the score was 76-70 and it was anybody’s game.  Kaukauna got back on the board with a bucket inside but five more points in a row from Mars made the score 78-75 with just 49 seconds left to play.  Kaukauna would now have to win the game at the foul line.  McCabe made four free throws and Braden Ivory hit a pair as well.  Mars kept coming but couldn’t get the margin below three points when Carmody hit a three just before the buzzer to make the final score 85-83 in favor of Kaukauna.

McCabe led the way with 42 points, including 7-13 from beyond the arc.  Keaton Ferris scored 13 while Eric Carl added 11 points.

Mars’ Robby Carmody wasn’t far behind as he tallied 39 points.  Hetzler added 21 as he went 7-9 from deep.  Andrew Recchia finished with 13 points.