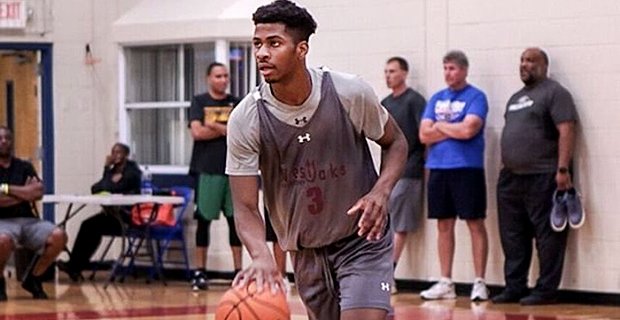 There was a lot of talent on display in the SIAA Krossover event at DME Academy this past weekend.

We had seen Potter’s House out of Jacksonville earlier in the fall, but this was our first time seeing 6’7 senior big forward Wheza Ponza.  Not only does he get a spot on the “all name” team, he’s got a lot of game to go with it.  While Ponza did knock down a jumper from just inside the arc, most of his points came on stick backs or free throws after attempting shots inside.  A very active offensive rebounder, his length and quick leap allow him to get his hands on the ball first in a crowd.  He gets a lot done on the defensive end as well as a pair of blocks and a couple of steals would suggest.

Every time we focus on Jadrian Tracey, a 6’5 wing for Oldsmar, he shows us a new facet to his game.  This weekend, the junior shot the ball very well from the perimeter.  Tracey is a strong driver that finishes well thru contact in traffic around the basket.  He is also a very good passer and makes good decisions with the ball on the move.

Jabez Thomas, a 6’7 junior out of Inspire Academy in Orlando, flashed a lot of potential over the weekend.  He has a solid frame, runs and jumps well, and covers the floor very quickly on the defensive end.  A quick leaper, Thomas alters or blocks a lot of shots in the lane.  Offensively he is limited to putbacks, transition baskets, or quick shots to the rim once he gets the ball after a cut into the lane.  His overall game needs to continue to improve as does the consistency of his effort and intensity.

Downey Christian’s 6’2 sophomore Emmanuel Maldonado had a good outing despite a rough day shooting from beyond the arc.  He did a good job of pushing the pace and either scoring in transition or getting easy shot attempts for teammates.  A crafty ball-handler, he does a good job of creating space with his dribble and taking advantage of it.  We also appreciate the fact that he keeps his head up at all times when in control of the basketball, searching for the right time to get the ball where it needs to go.  As he gets stronger as his body matures, Maldonado should become a better defender.

Considered one of the top players in Florida’s 2021 Class, 6’8 Moussa Diabate certainly lived up to that reputation on Saturday, finishing with 23 points and 16 rebounds against a more-than-solid Superior Collegiate squad.  Diabate has excellent footwork, whether in the post or out on the perimeter.  He can get to the basket quickly with a dribble or two and has excellent body control and touch when attempting shots near the basket.  Another quick leaper with length, he has a big impact on the offensive glass.  Though he only took a couple, Diabate’s perimeter jumper looks to be an emerging weapon.

For Superior, 6’5 senior Rob Hardy looks like he could be one of those valued “3-and-D” guys that get talked about a lot nowadays.  Despite a shot with little arch, Hardy connected on four of six from beyond the three point line.  He also completed a couple of lobs and dunks in transition.  He’s long and covers a lot of ground defensively.

Playing up on the 16U level this past spring and summer, 6’9 sophomore Lynn Kidd from The Rock School in Gainesville got some national notoriety.  He continued his solid play with 18 points and 11 rebounds on Saturday.  Kidd connected on a pair of threes in the game but did most of his damage around the basket.  He proved effective in ball-screen situations, caught nearly every pass thrown his way, and converted some tough shots in traffic.

Listed as only a freshman, 6’7 Prince Mosengo of Bradenton Victory Rock Prep certainly doesn’t play like one.  He’s got a sturdy frame and above-average athleticism but he made everyone sit up and take notice when he dropped in a pair of long jumpers during the contest.  Mosengo gets up and down the floor well in transition, battles for rebounds on both ends, and proved to be a reliable foul shooter.

While 27 points in and of itself is notable, the way 6’5 junior Selton Miguel of West Oaks went about getting those points was impressive.  He didn’t rely on his jump shot, though the ones he took did fall.  Instead, Miguel showed a quick first step to the rim, an ability to score through traffic, and convert his opportunities at the foul line.  He was also quite active on the defensive end, forcing turnovers and converting them into points.

Ramses Melendez, a 6’5 sophomore wing from Kissimmee Central Pointe, had a solid game in the nightcap.  He made shots from beyond the arc, got out on the break and finished the opportunities he had, and despite a thin frame competed on the boards and got more than his fair share of rebounds.