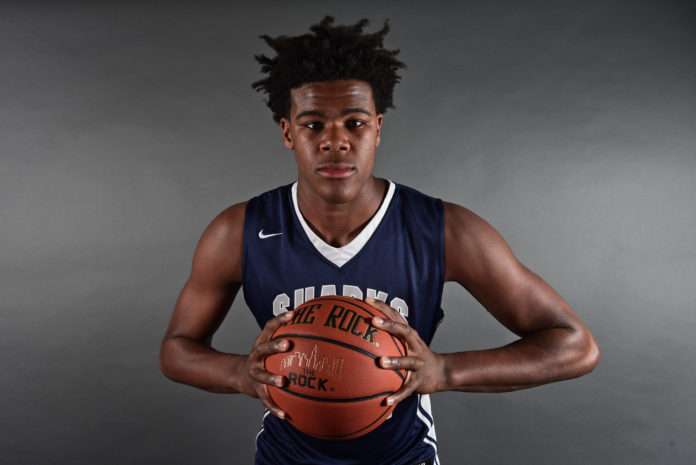 Both teams won in dramatic fashion in the semis to get this far. McEachern is loaded with young talent while U-School has Vernon Carey, who some consider the top player in the 2019 Class, as well as a couple of Georgia transfers in Trey Doomes and Drue Dinnon.  Bragging rights are on the line in this one!

Isaac Okaro got McEachern on the board first with a transition basket.  U-School responded with a three from Logan Alters to take a brief lead.  Jared Jones of McEachern hit a mid-range jumper then teammate Brandon Suggs scored at the basket.  Alters hit another three to tie the score at six.  Jones hit a three for McEachern and after Drue Drinnon hit a jumper, Jones hit another basket for an 11-8 McEachern lead.  After a free throw and dunk putback by Vernon Carey of U-School to tie the game at eleven, Sharife Cooper hit a three for McEachern.  A Trey Doomes bucket got U-School back to within a point but McEachern closed the quarter out with a 6-0 run to go up 20-13 after one period of play.

A Cooper three and an Okoro bucket inside pushed the McEachern lead to 25-13 early in the second.  Carey got loose inside to put U-School on the board but Cooper answered with a transition basket for McEachern.  A baseline drive by Drinnon and a transition basket by Doomes made the margin eight at 27-19 with just over five minutes to play.  Suggs put back a miss for McEachern then Scottie Barnes hit two free throws and Doomes scored inside for University.  Baba Akingbola got on the board for McEachern with a putback but then U-School put together a 6-0 run.  Barnes scored inside, Drinnon converted in transition and Barnes put back a miss.  With two minutes left in the half, U-School was down only two at 31-29.  Okaro got McEachern back in gear with a transition basket then Cooper did like wise to make it a four point game.  At the half, 35-31 in favor of McEachern.

U-School drew within one after a three from Drinnon opened the third quarter.  Another three by Alters gave them a 37-35 lead.  McEachern remedied that with a three from Devin Gordon and then a mid-range jumper in transition from Cooper gave McEachern a 40-37 lead.  U-School responded with a transition basket from Drinnon and a bucket inside from Carey to reclaim the lead.  A Josh Sanguinetti free throw was answered by McEachern’s Cooper with a long two to tie the score at 42 with 2:17 left in the quarter.  The teams would trade buckets for the next few possession until Drinnon hit a three with thirty seconds left to give U-School a 51-48 lead going into the final period.

A pair of McEachern baskets, one by Okaro and one by Cooper gave McEachern a 52-51 lead early in the fourth.  U-School answered with baskets by Doomes and Drinnon to reclaim the lead.  Cooper scored in transition for McEachern to get within one but then Carey scored on a drive and Barnes hit a mid-range jumper for a five point 59-54 lead with just over five minutes to play.  McEachern managed a free throw from Okaro but then Doomes scored  as well as Carey to push the U-School lead to six at 63-57.  McEachern made a last gasp run as Okaro his a free throw and Cooper hit a three to make it a two point game at 63-61 with two minutes to play.  At that point, U-School pulled the ball out, running clock and forcing McEachern to foul.  Drinnon made one of two and then Cary made both to push the score to 66-61 with under a minute to play.  McEachern was unable to make up ground, getting only a mid-range jumper from Cooper.  U-School would hold on to win by the score of 71-63.

U-School was led by Vernon Carey with 21 points.  Drue Drinnon was right behind at 20 while Logan Alters had 11 and Scottie Barnes finished with 10 points.

McEachern’s Sharife Cooper had 26 while Isaac Okoro finished with 16 points.