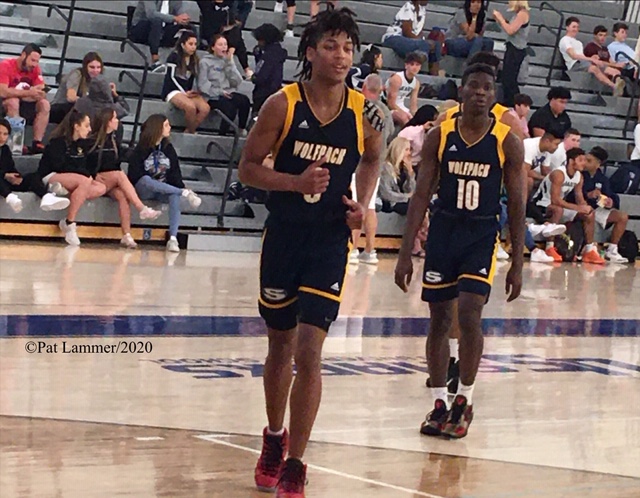 DAVIE — Class 2A Miami Schoolhouse Prep traveled north to face 4A University School Thursday in a contest between programs with high expectations.

Schoolhouse took down the two-time defending state champions, 72-65, to run its record to 11-5.

It marked the third consecutive game the Wolfpack have played against a defending state champion (Westminster Academy, then Stranahan and U-School).

JUNIOR COFER PUTS ON A SHOW

2021 guard Jimel Cofer Jr. (pictured) put on a show. The 6-foot-4 guard, who transferred to Schoolhouse Prep this season after playing at Texas Universal Academy, poured in 29 points. Cofer connected on 12 of 19 field-goal attempts and canned five 3-pointers. The left-hander showed toughness and confidence to go along with a lot of tools. The connection to South Florida is his father, who went to South Broward High and then played football at Michigan State. “He pushes me a lot,” Jimel said. “Just being confident. He trained me.” Coach Colin Campbell said of Cofer: “Jimel Cofer has got a bunch of high majors chasing him and following him. FAU has really been active also.”

The game turned in the fourth quarter when Schoolhouse went from seven points down to a seven-point lead, punctuated by a beautiful alley-oop from senior A.J. Lopez Jr. to Cofer with 1:25 to play. Lopez added 20 points in the victory. “What a tough game,” Campbell said. “[U-School] Those guys were really, really, really talented. They got going early, hit a bunch of shots. We were just able to withstand runs and really share the ball. Jimel Cofer was amazing tonight.”

University School led 17-11 after one quarter before Schoolhouse rallied to go up 33-31 at the half. The contest was tied 51-all going to the fourth quarter.

UAB will be in to see the 6-4 Lopez on Friday, Campbell said. St. Bonaventure, New Hampshire, McNeese and Maryland Eastern-Shore are in the mix and I expect more mid-majors to get involved. The 6-4 Lopez scored 15 of his 20 points in the second half, hitting 4 of 6 field-goal attempts and all six free throws. He, too, is in his first year at SHP. The senior came south from Queens (N.Y.). 6-8 2021 Jehu Wright (Stony Brook, Cal-State Bakersfield offers) and 6-1 senior point guard Jose-Luis Benitez each added 9 points.

University School was led by talented 10th-graders Jett Howard and Taylor Hendricks. Howard, a 6-4 shooting guard, scored 20 points and hit four 3-pointers; the 6-8 Hendricks shot 6 for 7 from the field for 17. Sharks first-year coach Ron Oliver said his club was tired. “We were a little fatigued,” Oliver said. “We got up in the fourth quarter. We just didn’t have enough energy to push it up to close it out.” U-School falls to 12-5.

Senior forward Jace Howard, the elder of Michigan coach Juwan Howard‘s two sons at U-School, is expected to announce his commitment Monday. Howard is reportedly down to Brown, Princeton and Michigan. Jace had 6 points Thursday — on 3-of-8 shooting — and grabbed a handful of rebounds. Senior guard Roger McFarlane contributed 9 points.