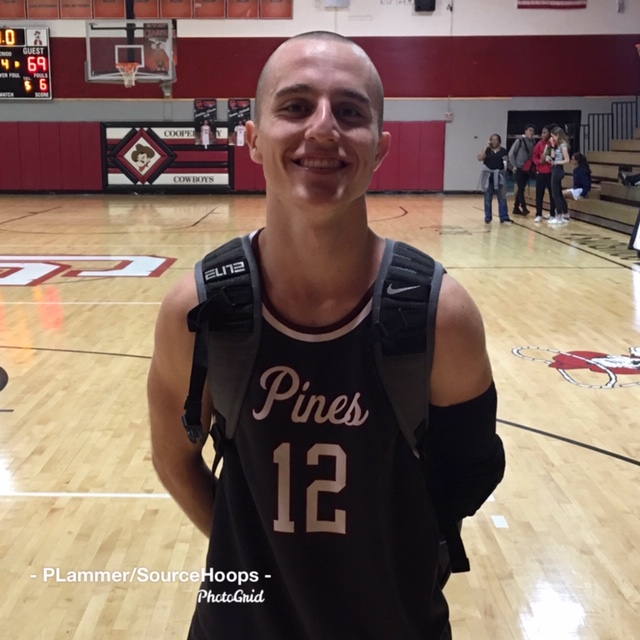 COOPER CITY — Dallas Graziani (pictured) was back in the Cooper City High gym Tuesday night but this time as a member of the Pines Charter Jaguars.

The former Cooper City star guard combined with fellow senior Osei Price to score 42 points as Pines Charter ran past Cooper City, 69-53, to go to 14-1 on the season.

It is the Jaguars’ 11th double-digit victory after going 11-15 last year.

“Right now we haven’t peaked yet but we’re working toward that,” Pines Charter coach Dave Roca said. “I think guys are playing for one another and that’s what’s important right now. At the beginning of the season, it was just working more so on guys building relationships.”

Oakland Park Northeast handed Pines Charter its only loss back in late November.

The 6-foot-5 Price had his way with the Cowboys, recording a double-double with 27 points and 13 rebounds. Price knocked in 11 field goals and made 4 of 5 from the free-throw line.

“The thing about Osei is that he can play every position on the high school floor and that’s what makes him very difficult to defend,” Roca said. “He’ll take what the defense gives him. So if they put a small guy on him, he’ll take him on the post.”

This is Price’s first year at Pines Charter. He came south from Montverde Academy. Price has offers from Bethune-Cookman, Canisius, North Florida and Stetson.

The 5-9 Graziani contributed 15 points, including getting to the free-throw line 8 times.

Graziani’s return drew a big crowd. The Cooper City contingent were not going to let him forget where he got his start.

“Obviously, he was very excited,” Roca said. “He’s built a lot of relationships here and he’s better for having been here and part of the program here. It was a fun moment, a fun opportunity for him. Obviously you heard the crowd getting into it a little bit.”

Sophomore guard Geoffrey Sprouse added 11 points for Pines Charter — including three 3s — and senior big Amarachi Ujagbor added 8 points and was a major factor defending in the lane and on the boards. Ujagbor has offers from American University, FIU and Navy.

SECOND QUARTER DOES IN COWBOYS

Cooper City enjoyed a fast start. The Cowboys led 16-14 after the first 8 minutes. But Pines Charter took over the game in the second period, outscoring Cooper City 22-7, and never looked back.