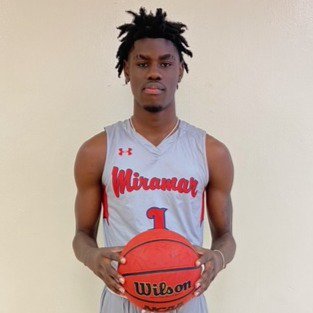 Justin Johnson, Doral Academy: The 6’6 sophomore has the ability to play inside or out on the perimeter.  On Monday we saw him post up smaller guys as well as go by bigger players.  Johnson uses his length well on the defensive end, coming up with deflections on the perimeter or help-side blocks in the paint.  He scores best when a path to the rim opens up but is also an effective open perimeter shooter.

Casey Etienne, Cardinal Gibbons: The 6’2 freshman shows excellent potential and D-I coaches should start investigating sooner rather than later.  He has good speed, size, and quickness for the point guard spot.  Etienne handles the ball well, gets by defenders and scores in traffic through contact.  His outside shot is respectable now and should only get better.  He didn’t hesitate to make the play to send the game into overtime.

Jimel Lane, Mater Academy: The 6’6 junior picked up where he left off at the Kreul where he averaged over 25ppg.  A high-level athlete with length, he didn’t force the action but was more than ready when opportunities came his way.  Lane scored well inside the arc, both from mid-range and around the rim.  If a mismatch presents itself on the perimeter, he can get to the rim and score in one or two dribbles.  Defensively, he is very active in the passing lanes and has the skill and ability to be a grab-and-go rebounder.

Gary Adams, Western: The 6’1 senior may have been the “Find of the Day”.  A solidly built guard that can play on or off the ball, Adams scored from a variety of levels.  He knocked down shots off the dribble with a hand in his face, scored in traffic at the basket, and got the ball to open teammates when it was the better option.  His strength allowed him to rebound with success against bigger players and he proved to be a tough and physical defender.

DeShawn Jean-Charles, Miramar: The 6’6 junior is long and athletic.  While most of his attempts came near the rim, he knocked down a mid-range jumper coming off a ball-screen and later nailed a three-pointer in transition.  His size and skill level allows him to create mismatches on the offensive end of the floor.  DJC controls his rebounding area on the defensive end and covers a lot of ground on that end of the court thanks to his length and quickness.

Charlie Bell, Westminster Christian: The 6’3 junior is another candidate for our “Find of the Day”.  He has good size and athleticism to go along with a strong frame.  Bell has decent ball skills and showed he could score off the bounce.  He also made enough perimeter shots to keep the defense honest and never seemed to force the action.  Bell also proved to be a solid free-throw shooter, intelligent passer, and a physical defender.

Ausar Thompson, Pine Crest: The 6’6 junior has great body control around the basket.  He is a high-level run/jump athlete with length that can play multiple positions.  Thompson’s jumper continues to improve in terms of consistency but he is at an entirely different level when he attacks the basket.  He also has a good feel for the game, is a more-than-adequate distributor of the basketball and doesn’t shy away from rebounding and playing defense.  Playing with his twin brother Amen, it is like he sees what his brother sees at the same time and makes the right play according to the situation.