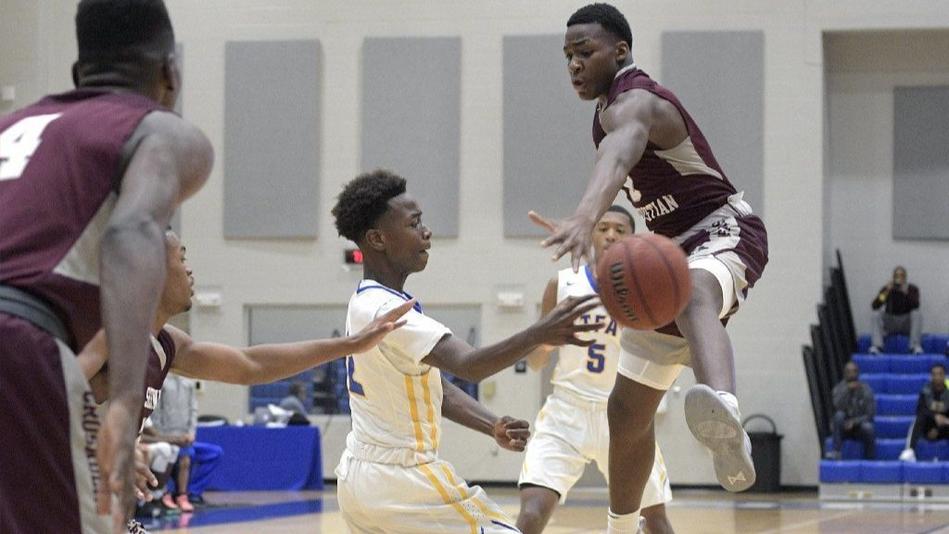 Fanbo Zeng, Windermere Prep: The 6’9 sophomore has the tools and talent to fill the stat sheet.  With his ability to shoot, pass, and handle the basketball, Zeng puts a lot of pressure on the defense from both the perimeter and in the post.  The lefty has a solid stroke from deep and if overplayed can put the ball on the floor and score after a dribble or two on a straight-line drive.  He is a grab-and-go rebounder and does a good job of finding teammates when on the move.  Zeng is still a work-in-progress when defending on the perimeter but he’s a good weakside shot blocker and doesn’t seem to mind playing physical in the post.  He also plays with a bit of a mean streak and toughness not usually seen in players from overseas.

Mike Trigg, Seffner Christian: The 6’5 junior guard is also a high-level football recruit, so there are a lot of options for him as a college athlete.  On the hardwood, he is a combo guard that has a good feel for the game, good court vision, high basketball IQ and the ability to score from all three levels.  His size and strength make him a good rebounder, even when going against an opposing front line of 6’9 and 6’10.  Trigg makes good decisions on the move with the ball, pushes the pace in transition, and is unselfish when it comes to making plays for others.  Defensively he’s solid as he anticipates the passing lanes well, has quick feet, and knows how to use his body and strength to force ball-handlers away from the lane as well as bump cutters off their path to the rim or basketball.

Ocypher Owens, Orlando University: The 6’6 junior wing was arguably the revelation of the day.  He poured in 34 points by our count, going 4-8 from beyond the arc in the process.  Long and lithe, Owens needs to gain strength, but has a solid skill set.  He handles the ball well on the perimeter, can get to the basket and score through contact in traffic, and gets rid of the ball quickly if the defense collapses on his drives.  Owens gets up and down the floor well, is a solid athlete, and is quick to rebounds both in and out of his area.  Though he reaches a bit too much on the defensive end, he does move his feet well laterally and should be able to drop that habit sooner rather than later.

Jayden Cooper, Orangewood Christian: The 6’3 senior is a strong and bouncy bit a bit undersized for the type of game he displayed on Saturday.  While Cooper did knock down a long two off the dribble and a three off the catch, he seemed more comfortably playing within fifteen feet of the basket, attacking the basket with a couple of dribbles and then challenging defenders inside.  He gets out quickly and finishes well on the break.  Because of his strength and athleticism, he can guard smaller players on the perimeter and somewhat bigger players in the post.

Trey Moss, Windermere: The 6’3 junior didn’t shoot the ball as well from the perimeter on this day, but even when he isn’t shooting well, he does a lot of other things for the team to give them a chance to win.  He’s got a nose for the ball, rebounds well for a guard, and when he gets the ball via either rebound or steal he is quick to push the pace.  Moss is a good free throw shooter and not afraid to attack the defense and take a lick to get to the foul line.  Generally, he takes good care of the ball and makes good shot vs. pass decisions.

Bryce Sensabaugh, Orlando Lake Highland Prep: The 6’5 junior has a solid body and while not passing the look test when it comes to run/jump athleticism in the lay-up line, he knows how to use what he has well.  With a clean, consistent stroke from deep, Sensabaugh is prone to runs of making three, four, or more shots from beyond the arc.  A good but not great driver, he will challenge the defense if overplayed for the three.  He rebounds his area well and is a good positional defender.  As his body tightens up, his athleticism should improve, making him an even more dangerous player at both ends of the floor.

Jayden Butler, Orlando The First Academy: The 6’3 junior is flying a bit under the radar but the last couple of times that we have seen him, Butler has been a potent scorer.  He’s a streaky catch-and-shoot scorer from beyond the arc, has shown a bit of a mid-range game, and isn’t afraid to take a hit when driving to the basket.  More of a straight-line than shifty driver, Butler won’t wow with dribble moves but has a quick first step to the basket.  He’s an active defender and solid rebounder for his size.

Dillon Mitchell, Tampa Sickles: The 6’7 sophomore makes his presence felt in a variety of ways.  He’s a fine passer from both the post and perimeter and often finds teammates cross-court for open three point shots.  The lefty is a quick driver from the short corners and high post and finishes creatively at the basket.  A grab-and-go rebounder, Mitchell is quick to push the ball up the floor either via his own dribble or getting the ball ahead to teammates.  He also has long arms, quick feet and the ability to defend multiple positions on the floor.  We didn’t see him take a single jump shot in the game but his form and success as the foul line (9-13) leads us to believe that a consistent jumper from the perimeter will be unleashed by Mitchell sooner rather than later.