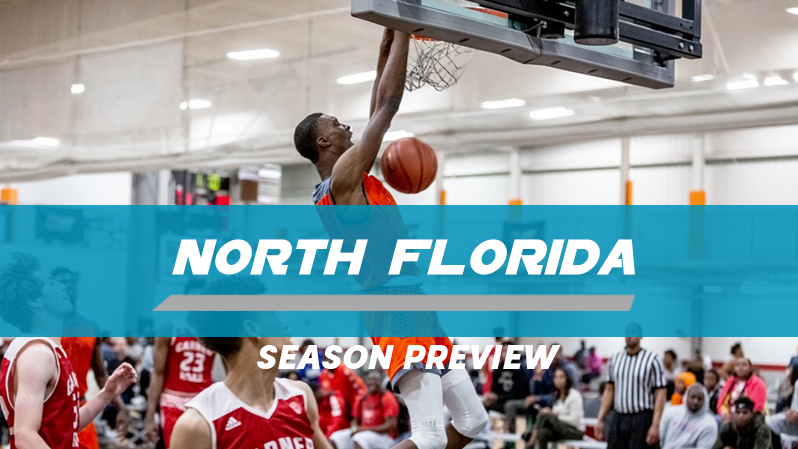 This past spring’s re-classification and re-districting endeavor created a much more balanced “big school district” in this part of the state.  Bartram Trail has long been a solid program but has yet to get over the hump and into a deep playoff run.  This year’s group is well-coached and will not be an easy out when the district tournament gets under way in February of next year.

Fleming Island made it to the state semis last year behind some stellar guard play.  The return of senior guard Sebastian Astor give Fleming Island a leg up in a very competitive district.  Having watched the team couple of times over the summer, it is a group with good size, athleticism, and plays with discipline on both sides of the floor.

This district stretches from Gainesville to Tallahassee, so it wouldn’t surprise if some district opponents do not meet until tourney time.  This selection is another example of going with a program that has a proven track record.  The Hurricanes may not have any singular player that is well-known, but it is a team that routinely challenges for a district title and makes life tough for opponents on the road to Lakeland.

Lee will go as far as junior forward Alex Fudge can carry them.  Fudge has several D-I offers in tow and he is beginning to get more than just a regional reputation in the southeast.  A broken wrist in late September set him and the Generals back a bit, but he should be back early in the schedule.  It wouldn’t surprise at all to see this team reach the regional finals.

Orange Park doesn’t have a talent comparable to Fudge, but the program has a slew of athletes than get up and down the floor, pressure the ball, and in general just make it a challenging thirty-two minutes of basketball for opponents.

Led by 6’6 First Coast Player of the Year Isaiah Adams, Paxon reached the state semis last season.  Adams returns, as do guards Maurice Willie and Jakobie Williams.  Despite the shuffling of classifications and district by the FHSAA, Paxon should be one of the favorites to reach Lakeland where they believe they have some unfinished business.

The Rams return the Gainesville Co-Player of the Year in senior guard K.J. Bradley, a consistent double figure scorer who also plays with a passion on the defensive end.  Add in the athletic talent that is Anthony Richardson, and Eastside has a combination that few opponents can match.  The Rams always have solid supporting cast that play their individual roles with the maximum effort possible.  In a re-vamped classification, Eastside looks to be a playoff participant lock.

The duo of junior guards Dallan Coleman and Justin Hicks will carry this team as far as they can.  Coleman is a top twenty-five ranked player in the national Class of 2021 and already has multiple D-I offers.  Hicks is starting to get his due as well.  Coleman and Hicks will be called on to stuff the stat sheet game in and game out, but if another consistent scorer can emerge and the supporting cast fully buy in, West Nassau should be just fine.

Jackson is one of just a handful of public schools that will compete in Class 3A.  The vast majority are either private or charter schools with a larger pool of talent to choose from.  That being said, Jackson is looking to get back to Lakeland where last season it fell in the Class 5A title game to University School out of Fort Lauderdale.  Senior Logan West plays bigger than his 6’4 size and if need be, Jackson can trot out a front-line of 6’8, 6’7, and 6’6, all of whom are athletic and bouncy.  If the guard play can come together by playoff time, Jackson’s outlook is bright.

The Stallions lost a lot from last season, most notably all-area first teamer Ahren Freeman.  However, Coach Jim Martin understands what it takes to re-load and will no doubt have this group prepared by facing a challenging schedule.  The focus will be inside where James Repass, a 6’9 junior, will dominate if not double-teamed.  If those doubles do come, he’s got a pair of shooters in Jack Sabell and Josh Himmel.  The challenges will be developing bench depth and a lack of size other than Repass.

Isaiah Adams, Jacksonville Paxon: The 6’6 senior has committed to the University of Central Florida and will look to repeat as the Jacksonville POY.  Slender, Adams is all arms and legs but he also has a high basketball IQ, a vast array of skills, and the ability to play any position on the floor.

Logan West, Jacksonville Jackson: The 6’4 junior is tough, fearless, and no takes no prisoners between the lines.  His perimeter scoring skills are beginning to catch up with his ability to score in the paint and finish in transition.

Alex Fudge, Jacksonville Lee: Another long athlete with developing skills, the 6’6 junior is likely to get a bit of a late start to the season after breaking his wrist in the fall.  Fudge is a consistent three point shot away from being recruited at the highest levels of D-I.

Dallan Coleman, Callahan West Nassau: Coleman has a national reputation and enhanced it this past spring and summer playing up on the EYBL 17U circuit.  Last season, he was one of just a handful of players to shoot 50+% from the field, 40% from behind the arc, and 80% from the foul line.  Bottom line: Coleman will get his points.

Ernest Ross, Alachua Santa Fe: The 6’8 junior had a breakout spring and summer with the Game Elite program on the Adidas Gauntlet circuit.  Lauded for what he can be down the road, Ross has a generous wing span, a lot of bounce, and finishes above the rim quickly in transition, lobs, and put-backs.  As his skills evolve, he will become that much more of a nightmare to contend with.

#1 Sophomore: To Be Determined: We looked and looked for a player to fill this category from the end of last season until now.  As of yet, no player has jumped in to claim the title.

#1 Freshman: To Be Determined: Again, no member of the 2023 Class in this region has announced his presence.

Senior Sleeper: Chantz Williams, Orange Park Oakleaf: The 6’4 Williams has been a known commodity since his freshman year.  An under-sized power forward, Williams averaged nearly eight rebounds and over three blocks a game last season.  He’ll need the right fit, but Williams should get a chance to play college ball on some level.