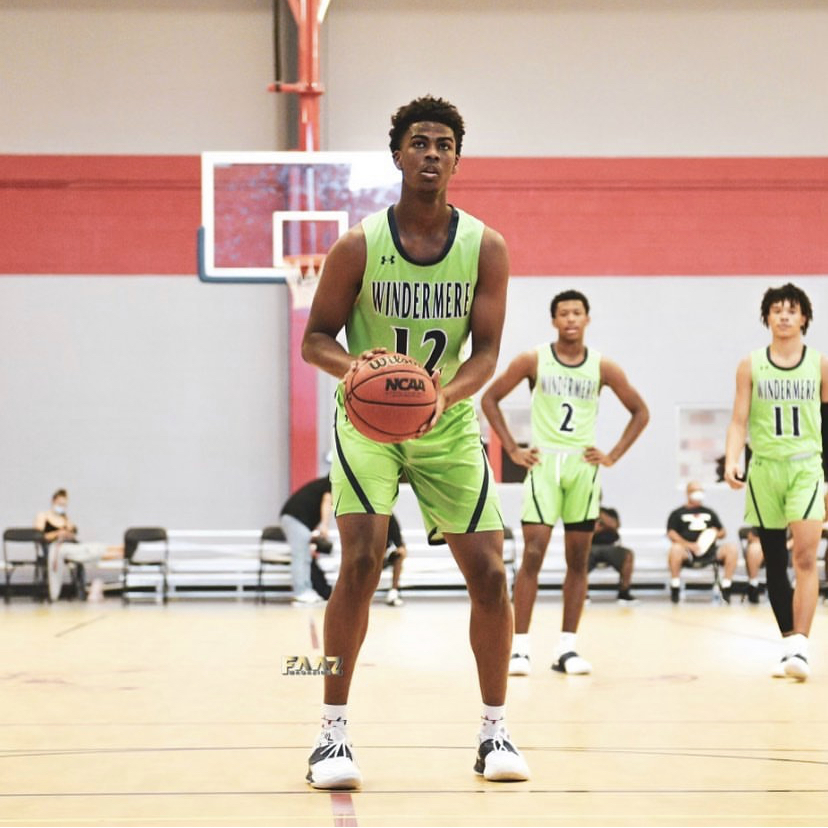 Friday’s nightcap at The Mosaic Shootout featured a pair of top fifteen teams regardless of classification.  Lakeland is ranked #10 by the FHSAA and #3 in Class 6A.  Windermere is ranked #13 overall and #3 in the 7A category.  Both teams viewed this game as a good tune-up in preparing for next week’s district tournaments.

Windermere looked very fresh off the bus and quickly established a lead.  The Dreadnaughts of Lakeland were finding it difficult to score around the rim thanks to the presence of 6’8 junior Sean Stewart of Windermere.  The Wolverines led 12-7 midway thru the period and looked to have solid command of the game.  That changed quickly as Lakeland started connecting on perimeter jump shots.  Before long, Windermere’s lead had shrunk to a single point, 16-15, after one quarter of play.

The Wolverines were able to maintain the lead for much of the second quarter.  It took a while but Lakeland finally tied the game at 26-26 with 2:30 left until the half.  The teams traded baskets and then Windermere was able to score just before the horn to end the quarter and take a 30-28 lead into the locker room.

The game continued to be a close, back-and-forth affair in the third period.  Lakeland grabbed their first lead, 36-35, with five minutes to go in the quarter but Windermere quickly responded.  The lead would change hands several times for the remainder of the quarter but after those eight minutes were up, Windermere was on top by one, 47-46.

As expected, the fourth quarter was as tightly contested as the first three.  It looked like Lakeland would gain the upper hand when, with five minutes left to play and the Dreadnaughts up 50-49, Stewart became hobbled with leg cramps. It appeared certain that Lakeland would be able to grow their lead with Windermere’s main weapon on the bench.  However, that proved not to be the case.  The Wolverines were able to stay even with Lakeland and when Stewart came back on the floor with 2:38 to play, the score was tied at 55-55.  From that point, both teams rushed a bit trying make a “game winning play” and no points resulted.  Finally, with just under a minute to play, Windermere senior Chris Nurse scored inside.  Lakeland took a timeout to organize the offense but the shot was off target and corralled by Stewart.  He was immediately fouled with ten seconds left.  Stewart missed the front-end of the one-and-one and Lakeland rushed down to get a shot.  A long three was taken and missed.  Windermere grabbed the rebound but lost the ball out of bounds with one-half of a second left on the clock.  After a timeout, Lakeland got the shot up quickly but it was off target.  Windermere wins a tough game on the road, 57-55.

Windermere was led by Stewart with 19 points.  Nurse added 10 points for the Wolverines.

Lakeland was led by Derajah Hardy with 17 points while Tyler Williams finished with 15 points.

Stewart was named Player of the Game for Windermere and he made his presence felt on both ends of the floor throughout the contest.  He finished with a triple-double: 19 points, 18 rebounds, and 10 “defensive stops” – six blocks and four steals.  Stewart made a couple of perimeter jumpers, enough to keep the defense honest, but most of his points came on putbacks, short drives and in transition.  He blocks shots without fouling, rebounds out of his area, and is quick to change ends of the floor.

Both Hardy and Williams were impressive for Lakeland.  A 6’0 sophomore, Hardy impressed with some crafty scoring moves at the rim as well as deep range on his jump shot.  A scoring point guard, there is still room for improvement but also time when it comes to decision-making with the ball.  Hardy is quick, pushes the pace, and is an aggressive defender.

Williams, a 6’5 junior, was named Player of the Game for the Dreadnaughts.  A hot commodity as a dual-threat quarterback on the football field, Williams brings that same toughness and high IQ to the basketball court.  In the past, we’ve seen him hesitant to shoot but in this game that wasn’t an issue.  He proved capable of knocking down shots off the dribble, scoring through contact in traffic, and has an effective shooting range to the three-point line.  Williams has good court vision and gets the ball where it needs to go in a hurry.