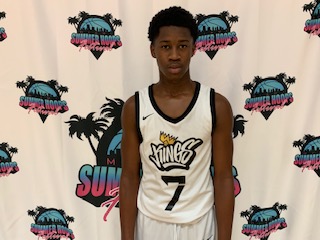 Once again, the Miami Hoops Festival brought out the talent to a national stage.  Thursday and Friday featured not only high-profile teams like Team Loaded, Pro Skills, Team Durant, and Team Breakdown, but also unveiled Overtime Elite, the group that is giving opportunities to the elite of the elite of high school basketball to ply their craft and get paid for it before going on to higher professional ranks.  By all accounts, the signature games more than lived up to the hype.

However, not all of the talent at the Miami Hoops Festival was reserved for those prime-time games.  Saturday and Sunday saw plenty of prospects pass thru the Florida Memorial University gymnasium.  Over the course of the week, we will highlight standouts from those two days.

Dylan James, 1 Family 16U: The 6’8 rising junior out of Winter Haven is a high level prospect and was usually at the beginning of any discussion regarding best prospect regardless of class during the weekend session.  Long and athletic, James shoots well from the perimeter, outrebounds the crowd, challenges shots on the interior and is an effective straight-line driver.  Whether he gets classified as a “three and D” guy or a “stretch four”, James already has garnered a few offers from teams in power five conferences and no doubt will see more come his way.

Marvin Golf, Team PBCHoops: A rising junior at Lake Worth High School in Palm Beach County, the 6’4 Golf may have been the find of the weekend.  He is a long and athletic guard that can play multiple positions.  A good scorer and shooter, Golf was effective from all three scoring levels on Sunday and showed he could make contested shots off the bounce or catch with consistency.  He also had his moments as a distributor with good court vision and solid ball skills.  Golf has a high ceiling but also a high floor to start from.

Jaylen Smith, 1 Family 16U: A 5’10 rising junior at Edgewater HS in Orlando, Smith brings a great deal of entertainment value in a positive way.  Strong and explosive, the lefty is fast to the basket and when his perimeter shot is falling like it did Saturday, going 6-7 from behind the arc in the game we took in, Smith becomes nearly unguardable.  He can play either on or off the ball and is comfortable as either a primary scorer or set-up man.  Smith can be a pesky defender when guarding the ball-handler thanks to his strength, quick feet, and active hands.

Malik Abdul, Team Hardaway 15U: A 6’6 rising sophomore at Miami Columbus, Abdul was one of the more impressive underclassmen from this past weekend.  The long athlete is quick off the floor, fast getting up and down the court and challenges any shot in the lane.  With his long arms and quick leap, he rebounds out of his area at both ends of the court.  Abdul is quick enough laterally to switch out on ball screens and contain the dribbler.  Right now he gets a lot of opportunity baskets such as tip-ins and at the end of the break, but he plays with great energy and looks like a guy that will work hard to elevate his skills.

V.J. Edgecombe, SFL Kings 16U: A 6’2 rising sophomore out of Miami Victory International, the Bahamas native was quite impressive playing up a level.  He was very good at getting to the basket and scoring in traffic while also making good decisions on the move, finding teammates for open shots.  A quality athlete, Edgecombe was active and disruptive on the defensive end.  He shows an aptitude for the game, an improving skill set when it comes to scoring from the perimeter, and an unselfish mindset.  Edgecombe is definitely a player to watch in the 2024 Class.

R.J. Moore, Showtime Ballers: A 6’5 rising senior at Orlando West Oaks Academy, Moore is a smooth guard that makes a wide variety of plays.  He has a reliable three point stroke that compliments his ability to drive, slash, and score at the rim.  A long and active defender, Moore is quick to the ball, disrupts the passing lanes, and helps out on the glass.

Dionjahe Thomas, Louisiana Elite: A 6’7 rising senior at Ellendor, Thomas proved to be a bouncy forward that scores best around the basket, though he did knock down a perimeter jumper and looked comfortable doing so.  Thomas scored well on quick, one to two dribble drives from inside the arc in the games we saw.  He also rebounds well and is quick to outlet the ball, run the lane, and beat the defense down the court to score in transition.

Jaylen Bernard, Rock United: A 6’5 member of the 2021 Class from Weston Cypress Bay, Bernard continues to showcase his abilities in hopes of getting a solid college offer before the end of the summer.  An athletic wing with an improved perimeter shot, Bernard is a bouncy player that scores well in traffic.  He is fast up the floor and finishes above the rim in transition.  An active rebounder and defender, Bernard doesn’t mind playing physical defense on the interior and has the lateral speed and quickness to defend smaller players on the perimeter.

Marcus Hill, 1 Family 17U: A 6’0 rising senior at Potter’s House Christian Academy in Jacksonville, Hill made quite a first impression.  Very athletic with great body control and touch around the basket, he connected on difficult shots in traffic with either hand.  Whether in transition or driving to the rim against a set defense, Hill was inventive in ways to get the ball up and into the hoop.  He plays with great energy at both ends of the floor, really getting after opponents on the defensive end.  We didn’t see much in the way of perimeter scoring, mostly because Hill had so much success slicing thru the defense.