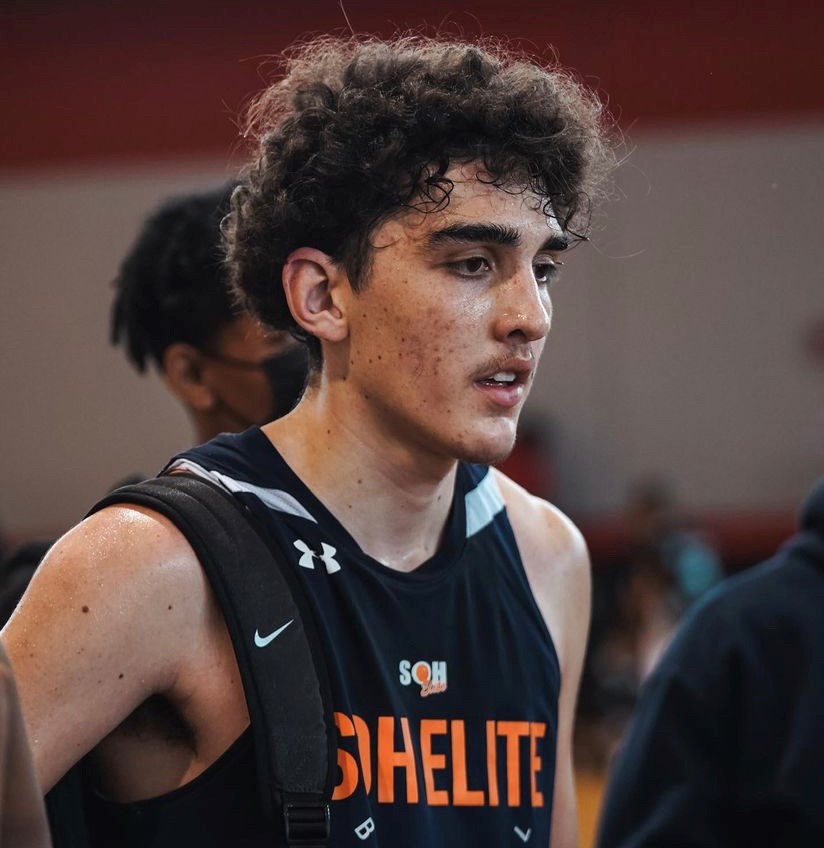 Lamine Niang, CP 25 National 17U: A 6’8 junior at Kissimmee Central Point Christian, Niang is long, athletic, a rim runner and shot challenger.  He is quick off the floor to pursue rebounds.  An opportunistic scorer, Niang gets most of his points on putbacks and in transition.

Sami Elkamel (pictured), SOH Elite 16U: A 6’8 sophomore from Calvary Christian in Fort Lauderdale, Elkamel gets lost in the shuffle on a very talented high school basketball team.  He was playing very well before tweaking an ankle late in the first game of the day.  Elkamel has some skill as he scores from fifteen feet and in, rebounds his area at both ends of the floor, and is a solid interior defender.  He plays hard each possession and seems more concerned with “Ws” than shot opportunities.

Aiden Jones, CP 25 Tampa 16U: A 6’2 sophomore from Tampa Durant, Jones struggled early with his shot but eventually got hot, knocking down three in succession from deep.  He has a quick release and always seems shot-ready.  Jones surprised a bit with a baseline drive “and one” as well as connecting on a mid-range pull-up later in the game.

Joel Harrison, 1 Family 16U: A 6’0 sophomore out of Tampa Carrollwood Day, he demonstrated a lethal combination of energy, effort, and skill.  He pushed the pace, got to the basket and scored before the defense could adjust.  Harrison proved to be solid with the ball vs. pressure and made good shot vs. pass decisions when attacking the basket.  An alert defender, Harrison came up with several tips and deflection in the game we took in.

Gabe Fajardo, SOH Elite 16U: A 6’3 sophomore from Somerset Silver Palms, Fajardo is a productive scorer whether driving to the basket or stroking shots from the perimeter.  He’s more strong that speedy when driving to the rim but he is a good ball-handler and distributor when on the move.

Eduardo Placer, 1 Family 16U: A 6’4 sophomore from The Master’s Academy in Oviedo, Placer is highly efficient and skilled.  He is a good passer, finisher, and perimeter scorer.  He can play either guard spot and is an alert defender.

Chris Arias, CP 25 North 15U: A 6’3 freshman now at Jacksonville Providence, Arian has the ability to play either guard spot.  He has good athleticism and length to go along with good speed and quickness with the basketball.  Arias is quick to grab a rebound and push the ball up the floor, generating easy opportunities for his teammates and himself.  His perimeter shooting continues to improve.

Eric Taylor, SE Elite 15U: A 6’1 freshman now at Orlando Edgewater, Taylor was very good this weekend at getting to the basket and scoring in traffic.  He made enough open perimeter shots to force the defense to play up which allowed paths to the rim.  Taylor showed a good feel for the game and made good decision with the ball on the move.