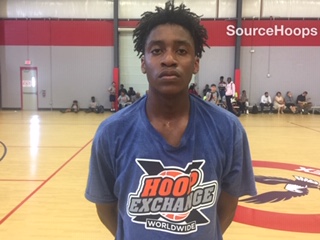 We move on to the Class of 2021 players that made an impact at the Hoop Exchange Spring Player Showdown.

Ernest Ross, Alachua Santa Fe: The 6’8 sophomore was one of the few 2021 players that attended Sunday’s gathering of players from 2019 and 2020.  By all accounts, Ross performed quite well.  Long, lanky and athletic, Ross is fast up and down the court in transition and quick off the floor to spear rebounds, block shots, and throw down lobs.  He has some perimeter skills as well, showing he could knock down open shots to the arc as well as putting the ball on the floor to score after a couple of dribbles.  Ross has what they call a “high ceiling”.

Miguel Miranda, Clearwater Superior Collegiate: A 6’5 wing, Miranda was dialed in from deep in the game we took in.  Whether off the catch or off the dribble, his form was consistent, his release quick, and the results were positive more often than not.  Miranda has a solid frame and decent ball-handling skills.  He can dribble-drive-dish when attacking the basket or score thru contact in traffic.

Jayven Millien, Sarasota Riverview: The 6’7 forward is long, supremely athletic, and simply explodes to the rim in transition or in the half-court.  He covers a lot of ground quickly on the defensive end, can grab rebounds and go without waiting for a guard, and quite frequently beats his opponent down the floor for easy scores.  Millien’s perimeter scoring tools are improving; don’t be surprised if he has a breakout spring in front of national scouts.

Darius Johnson, Episcopal (VA): The 6’1 point guard was one of the best players on both days of the event.  He has a high basketball IQ, scores and distributes the ball very well, and simply understands the game better than his opponent a vast majority of the time.  The consistent range on his perimeter shot extends past the three point line and Johnson has the ability to create for teammates when getting into the lane with his dribble.

Ramses Melendez, Kissimmee Central Pointe Christian: The 6’5 wing showed a much different skill set from when viewed during the high school season.  Yes, he shot the ball well from deep as expected but Mendez also showed a bit more athleticism with some transition dunks.  He also possesses a better than expected ability to beat his man off the dribble and finish through contact at the basket.  Finally, he made some passes on the move to open teammates for scoring opportunities that belie the notion that he is just a guy that can catch and shoot.

Thaddeus Squire, Fort Lauderdale Boyd Anderson: The 6’5 wing may have been the revelation of the day on Saturday.  He’s a strong, play-making wing that can get his own shot but also doesn’t mind getting the ball to open teammates at the right time.  His combination of strength and bounce allow him to compete against bigger players successfully when going after rebounds and defending bigger players after a switch.

Charles Crews, Seffner Strawberry Crest: The 6’2 guard has been quite the scorer on the high school level, but Saturday he morphed into more of a distributor with excellent results.  He made good shot vs. pass decisions with the ball on the move, delivered catchable passes in traffic, and was solid in ball-screen situations.  Crews is still a scorer at heart but his play on Saturday suggests he can make the move to point guard and still make a positive impact on the game for his team.

James Repass, Jacksonville Providence: The 6’10 Repass may not check all the boxes for “athlete” but he more than gets the job done.  Not surprisingly, he showed good footwork, post moves, and touch around the rim on Saturday.  Surprisingly, Repass proved that he could step away from the basket and score points.  He made a couple of perimeter jumpers as well as scored after a few dribbles from the inside the arc.  Repass is more of a shot challenger and changer than shot blocker but he still makes opponents think twice before driving the ball to the basket.