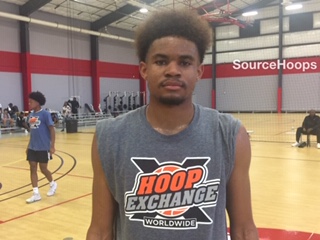 We took in the Hoop Exchange Spring Player Showdown this past weekend in Orlando.  Saturday was reserved for members of the 2022 & 2021 Classes while Sunday brought the classes of 2019 and 2020.

Corey Walker, Jacksonville Bishop Snyder: The 6’7 junior recently committed to SEC power Tennessee and is considered a top forty player nationally in the 2020 Class.  During play on Sunday, he proved to be an above-the-rim finisher as well as a guy that can use his strength to take defenders off the bounce from the wing and score in the lane within a couple of dribbles.

Marcus Niblack, Wildwood: Fresh off a state runner-up finish, the 6’2 junior guard continues to display a wide variety of skills.  Niblack is a creative scorer with the ability to knock down shots from various angles and distances on the perimeter as well as break down the defense, get into the lane and finish thru contact in traffic.  Niblack doesn’t get enough credit for being a solid set-up man for his teammates.

Inady Legiste, Fort Lauderdale Stranahan: Another state title winner, the 6’6 junior showed off some new wrinkles to his game.  In the past, we’ve seen him mostly perform around the basket area.  On Sunday, Legiste surprised with his perimeter skills.  He connected on a three off the catch and a bit later knocked back a long two after a step-back dribble.  A few possessions later, Legiste scored on a drive from the top of the key.  He pretty much dismissed the notion that his future is solely as an undersized “four”.

Nicholas Louis-Jacques, Miami Killian: The 6’4 junior has a jump shot that is a thing of beauty.  He has great form, follow through and rotation on it and the shot always looks on target.  Louis-Jacques also has a developing mid-range game and appeared to knock down a couple of bank shots on purpose.  He also has improved as a passer and scorer on the move with the ball.

Zach Anderson, Apopka: The 6’7 junior could be a revelation on the travel ball circuit if he plays like he did on Sunday.  A long wing that shoots the ball well past the arc, he buried shots off the dribble and the bounce, contested and wide-open, in the game we focused on.  Anderson is also a very good athlete, handles the ball well, is a solid rebounder and gets up and down the floor swiftly in transition.

Nicholas Strachan, Orlando Christian Prep: The 6’6 junior was unfamiliar to us despite our knowledge of the OCP program.  He consistently knocked down shots from the perimeter, both inside and outside of the arc.  Strachan played hard, pursued rebounds and both ends, and looked to be a solid athlete.  If his performance Sunday is the norm, he should draw plenty of attention this spring and summer.

DeShawn Shaw, Palatka: Located between Gainesville and Jacksonville, Palatka has come on as a basketball hotbed the last couple of years.  Shaw caught our attention Sunday with his ability to shoot the ball well from beyond the three point line, both off the catch and the dribble.  He also was one of the few interested in playing defense as he has quick hands and excellent lateral quickness.

Ange Dibwa, Miami Schoolhouse Prep: The 6’10 insider is a good athlete with size.  He was an active rebounder at both ends on Sunday.  Dibwa moves up and down the floor well and isn’t afraid to play physically in the post.  A bit raw offensively, he’s got time to figure it out.  On a side note, he led his team in points (13) and rebounds (6) in the semi-final round at Lakeland.