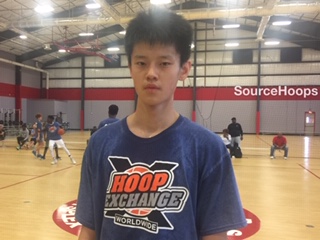 We finalize our coverage of the Spring Player Showdown with a look at some of the members of the 2022 Class (and a couple from 2023) that made an impression.

Gregg Glenn, Fort Lauderdale Calvary Christian: The 6’7 forward entered the high school season as one of the top prospects in the class and his performance on Saturday solidified that notion.  He has excellent size and skills to play the wing forward or wing guard position.  Glenn was a surprisingly good passer this weekend.  He showed a much-improved perimeter jump shot that extends to the three point line.

Fanbo Zeng, Windermere Prep: At 6’9, Zeng already possesses coveted height.  Though he was only able to play in the four-on-four session due to some tendonitis, Zeng’s ability to score from the perimeter as well as find cutters and hit them with catchable passes for scores had many observers buzzing about his upside.  He moves pretty well for a young player his size.  As he gains strength with physical maturity, Zeng will become an even more valuable player.

Jah Nze, Oviedo Hagerty: The 6’3 wing is strongly built and displayed a reliable jump shot out to the three point line.  While he didn’t do it often, when Nze did attack the basket with the dribble, he was able to score despite contact.

Ven-Allen Lubin, Orlando Christian Prep: The 6’5 combo forward is an explosive athlete around the rim as he gets up quickly for scores around the basket on offense, challenges shots on defense, and pursues rebounds relentlessly at both ends.  Lubin scored well from fifteen feet and in at the event and with some work he should be able to play on the perimeter full time in the not too distant future.

Faheim Meran, Miramar: An athletic 6’4 wing, Meran flourished in the uptempo setting.  He showed some skill as a passer and also shot the ball well from the perimeter.  With his wing span, foot speed, and lateral quickness, he could develop into a disruptive defender.

Ausur & Amen Thompson, Fort Lauderdale Pine Crest: The 6’4 twins are tough to distinguish and defend.  Both are long and likely still growing.  More importantly, they are very skilled and have high basketball IQs.  In both games we saw them play on Saturday, each Thompson twin made smart basketball plays.  While we didn’t see much in the way of perimeter scoring, Ausur and Amen each handle the ball well and complete plays at the basket.

Tre Donaldson, Tallahassee Florida State University School: The 5’10 point guard plays with a lot of swagger and confidence.  He has excellent court vision, finds teammates for easy scores, and is creative with the basketball.  Donaldson is difficult to keep out of the lane and makes good shot vs. pass decisions on his way to the hoop.

Carl Charenfant, Fort Lauderdale Calvary Christian Academy: A member of the 2023 Class, the 6’4 wing more than held his own against older competition on Saturday.  Athletic and long, Charenfant exceled in the uptempo pace that was prevalent all weekend.  Admittedly, he did surprise with his ability to knock down shots from the perimeter.  The ceiling is very high for Charenfant.

Sam Walters, Orlando West Oaks Academy: Already 6’7 and only a member of the Class of 2023, Walters showed a lot of positive skills and qualities while playing up.  The lefty handles the ball surprisingly well in the open court and can step out and shoot the ball from the perimeter with positive results.  The phrase “stretch four” was designed with Walters in mind.