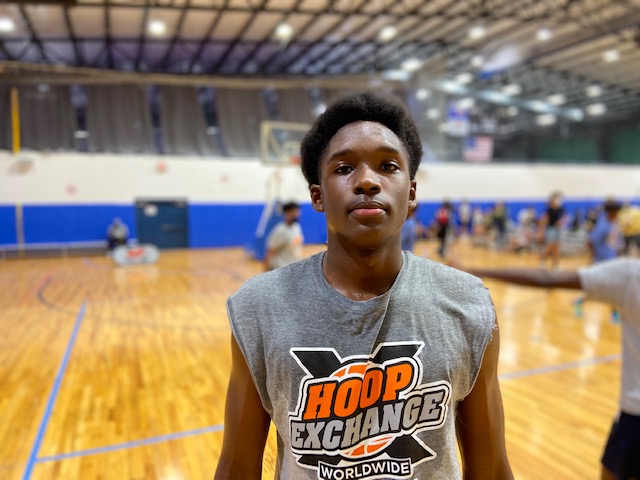 On Saturday, the Hoop Exchange pretty much filled up the Orlando Sports Center will Ballers from all over the state for their Summer Invitational.  The morning session was set aside for Sophomores (2023) and Freshmen (2024).  We will focus on that group in this report.

Jason Jackson, Sarasota Riverview: The 6’2 sophomore is simply one of the more dynamic players in the state regardless of class.  Not only is Jackson explosive both horizontally and vertically but also possesses a solid feel for the game.  He excels at attacking and finishing at the basket and balances that with a respectable perimeter shot.  Defensively, he has quick feet and anticipates the passing lanes well.

R.J. Jones, Gainesville The Rock School: Listed at 6’8, the freshman performed quite well.  With a strong frame and very good run/jump athleticism for a young player, Jones plays physically and his motor revs high.  A strong driver and finisher from inside the arc, he attempts to dunk everything with ferocity around the basket.  Jones’ perimeter shot looks respectable at this point, though his shot selection can be questionable (like any other freshman).

Asa Newell, Fort Walton Beach Choctawhatchee: We caught the 6’6 freshman earlier in the summer and he continued to show promise on Saturday.  He’s long and most likely still has some physical growth left in him.  Newell scores well from fifteen feet and in, both by the drive and the jumper.  He is quick to rebounds and runs the floor in transition.

Dylan James, Gainesville The Rock School: The 6’8 sophomore is a transfer from Winter Haven and looks to have put in some serious skill work since we saw him at the end of the 2019-2020 season.  He’s a good athlete with extra wingspan, gets high for rebounds and runs the floor swiftly.  James’ perimeter skills look solid and he has a pretty stroke that is reliable out to the three-point line.

Eduardo Placer, Oviedo The Master’s Academy: A 6’3 sophomore, Placer was as impressive with his aggressive mindset as he was with his overall skill level.  Very crafty with a high basketball IQ, the lefty does a great job of getting to the basket, finishing in traffic with either hand.  He also has a reliable shot to the three-point line and makes defenders pay from deep if they overplay him for the drive.

Anthony Floyd, Hialeah Mater Lakes Academy: The 5’9 sophomore has a bit of a stocky build, but he’s seriously quick with the ball in his hands.  He gets to the rim with ease but also has a respectable outside shot to keep defenders honest.  Once Floyd gets into the lane, he does a good job of getting the ball to the right teammate when the defense collapses.  Essentially, he makes plays for others as well as himself.

Cameron James, Apopka: All we can say is “WOW!” after watching the 6’5 sophomore play this weekend.  His improvement is off the charts from when we last saw him during the season.  Strong and athletic, he is a bull when taking the ball to the rim.  With excellent body control, he makes a lot of difficult shots in traffic.  Active on the glass at both ends of the court, James is quick to convert from defense to offense and finish above the rim on the break.  As his perimeter skills evolve, so will his recruiting level.

Anthony Robinson, Tallahassee Florida High: The 6’1 sophomore brings a solid and steady presence to the point guard position.  He has the ball on a string and isn’t phased by extended defensive pressure.  Robinson makes good decisions on the move and finds teammates for easy baskets.  He also is a respectable shooter to the three-point line and beyond.