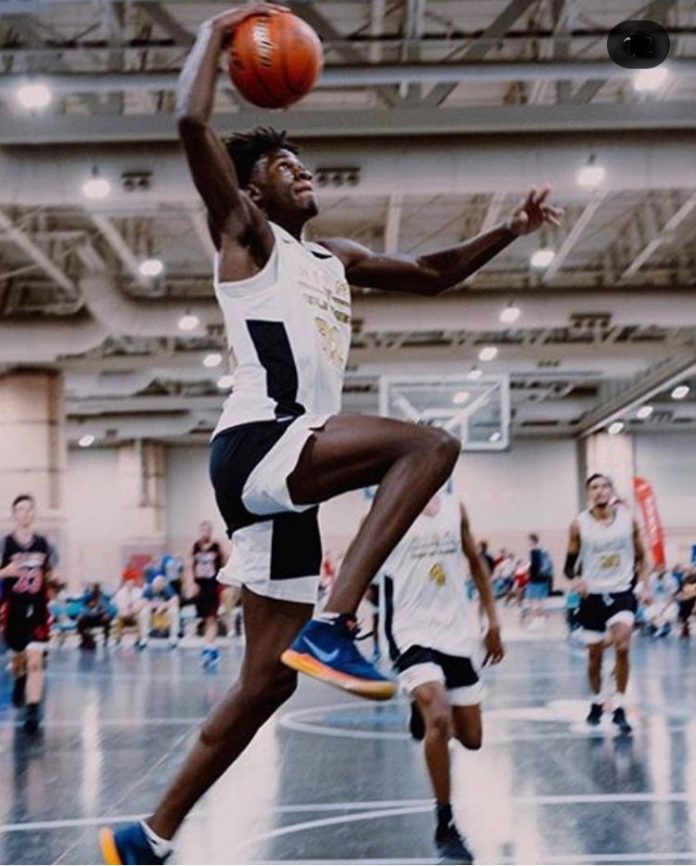 Wesley Cardet, Team Breakdown: The 6’5 rising junior only played one game at the event due to soreness in his knee, but that one game against Team Parsons was more than enough to show why he is a top 25 player nationally in the 2021 Class.  Cardet’s first bucket was a slashing baseline drive that he completed in traffic and he kept rolling from there.  He proved difficult to contain off the dribble and after the defense started playing off of him, Cardet knocked down perimeter shots.  Most impressive were a pair of threes off the dribble that were both tightly contested.  Dishing some assists, getting after rebounds on the offensive glass and playing passionate defense all contributed to a very good outing for Cardet.

Jordan Sears, Team Parsons: The 5’11 rising senior has had an outstanding spring and summer and it continued at the Showdown.  He had fourteen points off the bench against Team Breakdown and upped that number to 24 against Triple Threat later in the day.  Sears finishes well at the rim but also has deep range on the perimeter, making him a very tough cover.  He does a solid job of creating for others thanks to a high basketball IQ and excellent court vision.  Sears generally takes good care of the basketball vs. pressure and makes the right shot vs. pass decisions when on the move.  He is also a capable defender and anticipates the passing lanes very well.  In short, Sears plays the game the right way and is highly productive. 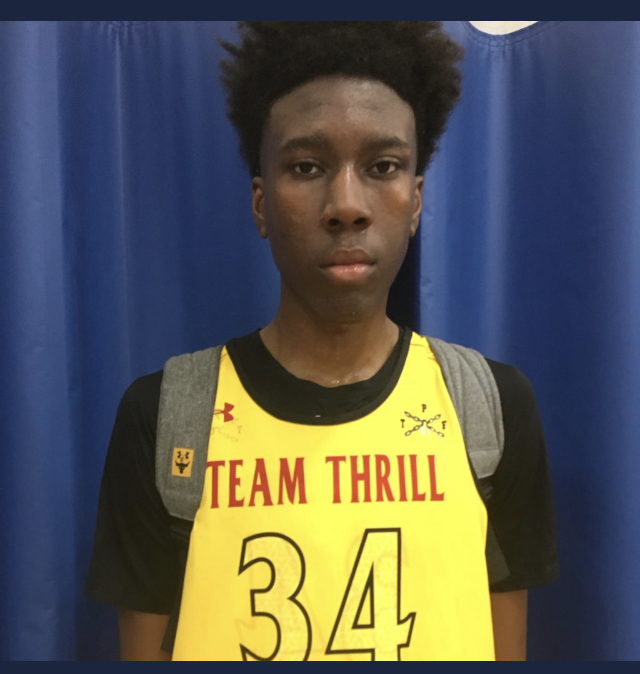 Elijah Rantin, Team Thrill: The 6’9 rising senior forward, didn’t put up big numbers in the pair of games we watched but he has great potential.  With size, length, and above-average athleticism, he has physical traits that college coaches covet.  Also, Rantin knows what he does well on the court and focuses on that.  He rebounds his area well, holds down the paint and challenges shots, runs the floor, and makes the most of his offensive opportunities when they come his way.  Rantin will get better offensively as he fills out and gains strength.

Justin Reid, Triple Threat (featured picture): The 6’6 rising senior was another one to appear in only one contest but his 20 points and 9 rebounds vs. a potent Team Breakdown front line served notice that he’s all business.  He may not be the most skilled guy on the court, but wind him up and he goes out and rebounds with a vengeance, runs the floor, finishes above the rim, and actively defends both the perimeter and the post.  Nearly all of Reid’s points came on putbacks or in transition but he did have a couple drives to the rim that he finished with authority, giving hope that he can grow his offensive repertoire.  Coaches like guys that play hard, rebound, and can defend multiple positions, so Reid should have a solid chance to play at the next level.

Diego Platas, Team TMac: The 6’7 Platas is a rising junior and played up this past weekend.  What impressed most was his footwork in the post and his effectiveness against bigger guys down inside.  Platas was patient when attacking the defense, scored with either hand around the basket, worked hard to get to offensive rebounds and rebounded his area well on the defensive end.  He can step out and make perimeter shots when given time and space.  It will be interesting to see how he progresses over the next year and how college coaches at different levels view his ability to contribute.

Ricky Bush, Miami Suns: The 5’10 rising senior is a blur on the court.  He is constantly pushing the pace and routinely beats defenses down the floor.  He had games of 22 and 14 points on Sunday, many of those coming at the rim.  The lefty is quick and shifty with change of direction dribbles and gets to the rim before help can cut him off.  Bush was also a dangerous but streaky three point shooter on Sunday.  Once got into a rhythm, he canned more than a couple in succession.  He should make an impact for Miami Norland this coming season.

Michael Eads, Team Parsons: The 6’5 rising senior is like Amazon; he can get you whatever you need.  Three pointer off the catch or dribble? Yep, that is in stock.  Slash and cash in at the rim? Eads delivers.  Rebound successfully against bigger foes at both ends? Don’t need a “prime” account for that.  “D” up the other team’s scoring threat?  Always available.  Eads may not blow people away with athleticism and fancy ball-handling, but he’ll absolutely rip the heart out of the opposition with the right play at the right time.

Jermaine Dyges, Team Breakdown Grey: The 6’2 rising senior was solid all weekend long as he played a lot of games with several versions of Team Breakdown.  Whenever he played, there was consistency in effort and output, both at high levels.  Dyges is a combo guard that can score when necessary either at the rim or from the perimeter but also push the pace or penetrate and find teammates for open shots.  He has good size and long arms, allowing him to defend multiple positions.  Word is he’s drawn some D-I interest during the June and July live period, and his play this weekend would certainly warrant it.