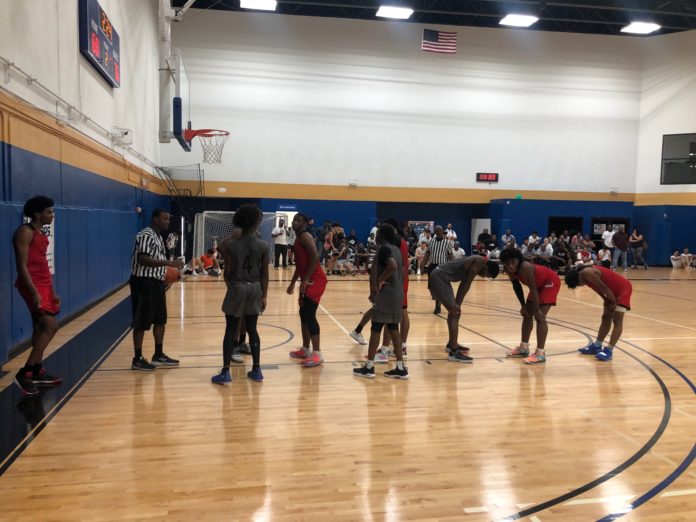 Day Two of the Grassroots Summer Showdown is in the books and it was by all means a great one.  Fans and non-D-I college coaches packed the DS Sportsplex in Deerfield to see some heavyweight matchups that crossed shoe company barriers.  What resulted were some tremendous games and standout individual performances.

Two powerhouse programs went at it as Team Breakdown matched up with Team Parsons.  Both teams were playing a bit short-handed but every player from each side brought the intensity throughout the contest.

The first half was a back-and-forth affair as both teams played the game at a high level on offense.  It was pretty much a game between ten future D-I prospects at all times.  Neither team could build more than a two-possession lead until late in the half.  That’s when Team Parsons finished out the period on an 8-0 run to lead by eight at 42-34.

It didn’t take long for Team Breakdown to get back even early on in the second half.  They cobbled together a 10-2 run to tie the score at forty-four with just under fourteen minutes to play.  The teams continued to go back and forth until with just under ten minutes to play and the score tied at fifty-two, Team Parsons put together a 10-3 run, grabbing a lead which they would not relinquish.  Team Breakdown made it interesting for most of the remainder of the second half, staying within two possessions until late and they had to start trapping and/or fouling.  Team Parsons was able to take advantage of the situation and increased their margin, ultimately ending up with a double-digit win, 88-76.  Both teams deserve a great deal of credit for playing hard up to the final buzzer.

Team Breakdown was led by Wes Cardet with 20 points while Tyreke Francois tallied 18, Sam Rolle connected for 16 and Marvel Allen finished with 14 points.

If Darius Johnson of Team Parsons 16U takes one of those “23andme” DNA tests, it will show that he has that rare “clutch” gene.  Both contests for Team Parsons came down to the wire and each time it was Johnson that made THE play to get his team in front and headed to the winners’ circle.

Taking on Landfall Elite, Johnson found teammates for open looks to keep the game close.  When crunch time came, Johnson found ways to get to the basket and finish through contact in traffic.  He did much the same against the Jupiter Jaguars 17U team later in the day.  In another hotly contested game, it looked like the Jaguars would pull it out, but Johnson made plays at both ends to eventually secure the win.

Team TMac found themselves down big to Team Thrill out of Maryland early in the second half.  That’s when Jamal Norris came alive.  He drained eight of his nine threes in the second half, leading a strong charge that fell just short.  In the nightcap game against Team Breakdown 16U, Norris went 4-7 from deep.  The thin sniper was sensational off of catch and shoot situations but he also flashed some ability to score when putting the ball on the floor.  With shooting from beyond the arc at an all-time premium, Norris is a guy that is sure to draw more recruiting attention.

Micah Octave, a 6’3 rising junior out of Boca Raton Grandview Prep, had quite the performance against Team Parson’s in a tight 16U matchup.  While his final tally of twenty-three points was impressive in and of itself, his versatility and all-around game was striking.  Octave did a superb job of getting to the basket and scoring in traffic.  Whether it was taking his defender off the bounce against a set defense or running the floor in transition, Octave finished strong.  He was also quite active in pursuing and putting back offensive rebounds.  Defensively, he came up with several steals thanks to his superb instincts, timing, and length.  If he has a reliable jumper that he didn’t unleash today, then Octave is quite the offensive weapon.

Can’t wait for Day Three of the Grassroots Summer Showdown!