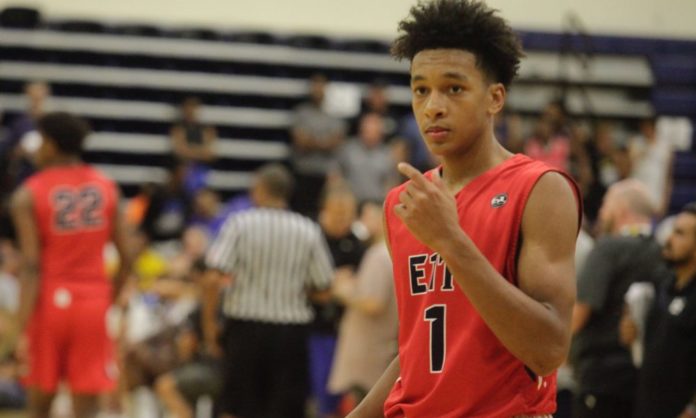 We traveled up Florida’s Turnpike and I-75 on Friday night to take in Round Two of the rivalry that has become The Villages Charter and Ocala Trinity Catholic.  TC reached the championship game of last year’s Class 5A state tournament and return everyone back.  The Villages, led by UF recruit Tre Mann, has a talented squad primed to win this year.  Trinity won the season’s first matchup back in December by three points at The Villages.  This would be the second matchup in what could possibly be four this season should the teams meet in the district final and regional semi-final.

The first quarter was very well played.  Jarvey Gainey, a 6’2 sophomore, opened up the scoring with a three for Trinity.  The Villages answered right back and from there it was game on.  The scored was tied at twelve at the midway point of the period but The Villages led by one at 17-16 at the end of the quarter.

A 7-0 run by The Villages over the first two minutes of the second quarter gave them an eight-point lead before Trinity Catholic was able to counter.  Counter they did, putting up a 10-3 run to get back to within one at 27-26 with four minutes left in the half.  Trinity tied the score at twenty-nine thirty seconds later.  Then things started to get chippy.  The refs had been good about not calling unnecessary technical fouls but the players kept trash-talking and things got very physical under the boards.  At one point, play had to be stopped and teams sent to the benches to cool down and the refs re-establish control with the head coaches.  Once play resumed, neither teamed gained an advantage until the final minute of play when The Villages got a tough finish in traffic from Mann and then a three from him on their next trip down the court to lead by five at 38-33 going into the half.

The Villages came out hot to start the third quarter.  Three pointers by Mann and 5’10 senior guard Terry Ivey ignited an 11-3 run over the first two minutes of the period, giving the Buffalo a 49-36 lead with just under six minutes to play, forcing a Trinity timeout.  It didn’t help as The Villages continued to roll while Trinity struggled on offense, turning the ball over on five possessions as they tried to slice the deficit.  By the end of the third, The Villages were up by fifteen at 61-46.

In the fourth quarter, the deficit reached twenty at 76-56 with four minutes to play.  Trinity made one last run but ultimately could only slash the margin the thirteen at the final buzzer, 80-67.

Mann was electrifying and led The Villages with 31 points.  Brandon Farmer owned the interior to the tune of 20 points and 13 rebounds.  Ivey contributed 19 points.