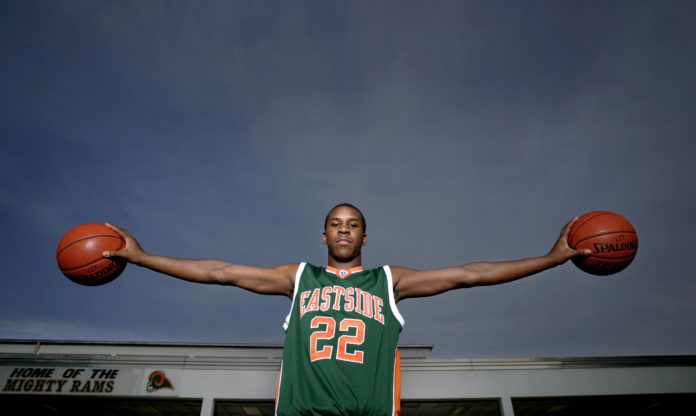 We trekked to Gainesville on Saturday to attend the Dante Anderson Memorial at Eastisde.  While we were only able to attend the final two games of the event, they were certainly more than worth the trip.

Both schools represent communities that love their high school hoops.  Leesburg is the two-time defending champion in Class 6A while Hawthorne is always a state title contender in Class 1A.  Hawthorne was coming in on a high note, finishing fifth at the Kingdom of the Sun tournament the previous week.  Leesburg was on the other end of the spectrum having lost Lance Irving, the leading scorer as well as the heart and soul of the team, to a knee injury for the remainder of the season.  The Yellow Jackets were still in the process of how to compensate for his loss coming into the contest.

Both teams were aggressive on defense to open the game; Leesburg with a long and active zone while Hawthorne relied on full court pressure.  Possessions were extended and points hard to come by as Hawthorne led just 6-4 midway thru the quarter.  The Hornets were able to turn a pair of Leesburg turnovers into points to lead by five, 12-7 going into the second period.

Just before the midway point of the second quarter, Leesburg was able to get within one at 15-14 but Hawthorne answered with two quick baskets off the press to push their lead back to five at 19-14.  The teams would continue to trade baskets until the half, which found Hawthorne up 26-21.

The third quarter proved to be Leesburg’s undoing.  Without Irving creating points and manufacturing scoring opportunities for teammates, the Yellow Jackets struggled to score.  Hawthorne extended their margin to nine at 36-27 midway thru the third and held an eleven point lead, 44-33, heading into the final period.

Leesburg was unable to break through in the final period and never seriously threatened to make a run to take a lead.  Hawthorne would go on to get a quality win against a big school opponent by ten with the final score being 58-48.

Mike Reed, a 6’4 senior for Hawthorne, led the Hornets with 19 points.  A long leaper, he continuously found the seams of the Leesburg zone and scored inside.  He showed some nice footwork around the basket.  However, no play was bigger than his chase-down block in the third quarter, showing great hustle and athleticism.

Khalil Jackson, a 6’3 senior for Hawthorne, connected for 14 points.  He was able to work his way along the baseline and score craftily around the rim.

Hawthorne’s guard trio of 6’0 senior Alfonso Williams (13 points), 6’0 senior Alex Dubois (5 points), and 5’9 senior Devante Bowie (8 points) cause all sorts of havoc on the defensive end, coming up with steals, loose balls, and long rebounds and quickly converting them to points.  Their individual and collective ability to get to the basket and finish in traffic to go along with their defensive tenacity gives the Hornets their identity on both ends of the court.

For Leesburg, someone needed to step up in Irving’s absence.  Both 6’3 junior Akeem Nickerson (14 points) and 6’4 junior Jyre McCloud (14 points) are candidates for that role.  Nickerson seemed a bit more confident and aggressive in looking to score in the half-court and at times his perimeter shot fell with frequency.  McCloud was more consistent from the perimeter but he showed more impact as a finisher at the basket.

Eastside hosted Central Point Academy out of the SIAA in the nightcap of the event.  Central Point had great success in a tournament out west after Christmas, so this game was going to be a real challenge for the host school Rams.  They were certainly up for it, leading 12-7 midway thru the first quarter.  Thanks to some hot perimeter shooting, Eastside’s lead was 21-14 after the opening period.

Central Point outscored the Rams 9-2 in the first two minutes of the second period to tie the game at twenty-three.  Eastside’s lead was just a single point at 29-28 at the four minute mark but from that point on, the Rams would outscore Central Point 9-0 to end the half up by ten at 38-28.

Eastside’s perimeter shots continued to fall in the third period.  They stretched their lead slowly but surely over the course of the quarter and led by fourteen at 58-44 with one more period to play and looked to be in complete control.

But looks can be deceiving.

Central Point broke out a full court zone press and within two minutes they had cut the deficit in half.  Also, 6’3 junior Luis Colon was getting to the rim at will.  If he didn’t score, he earned a trip to free throw line; sometimes he got both.  The margin was still seven at 67-60 with 3:30 left in the contest.  Less than one minute later, Central Point was within three at 70-67 and with two minutes left was down only one at 72-71.  Eastside began to work some clock and Central Point was forced to foul. Eastside hit their foul shots but couldn’t get stops at the other end.  The game was in doubt until Central Point missed a three with twelve seconds to play and Eastside connected on two free throws with nine seconds to ice the game.  A meaningless basket by Central Point made the final score 80—77 in favor of Eastside.

Emontae Shannon, a 6’4 senior, paced Eastside with 22 points.  His hot perimeter shooting in the first half (4-4 from beyond the arc, 5-5 overall from the perimeter) ignited Eastside to a lead.  His 8-10 performance from the foul line in the fourth quarter was just as important.

Korin Bradley, a 6’1 junior, added 21 points for the Rams.  His forte was getting to the basket and scoring thru traffic.  He did hit a couple of threes but needs to continue to improve in that area of the game.

Colon led all scorers with 30 points, 20 of those coming in the final QUARTER!  He’s strong, crafty with the ball, and also possesses excellent court vision, finding ways to get his teammates easy baskets.

Jeriel Cayas, a 6’2, contributed 17 points for Central Point.  His shot looks good despite going just 1-3 from deep.  His points came on drives and quick cuts to the basket, as well as beating the defense down the floor in transition.