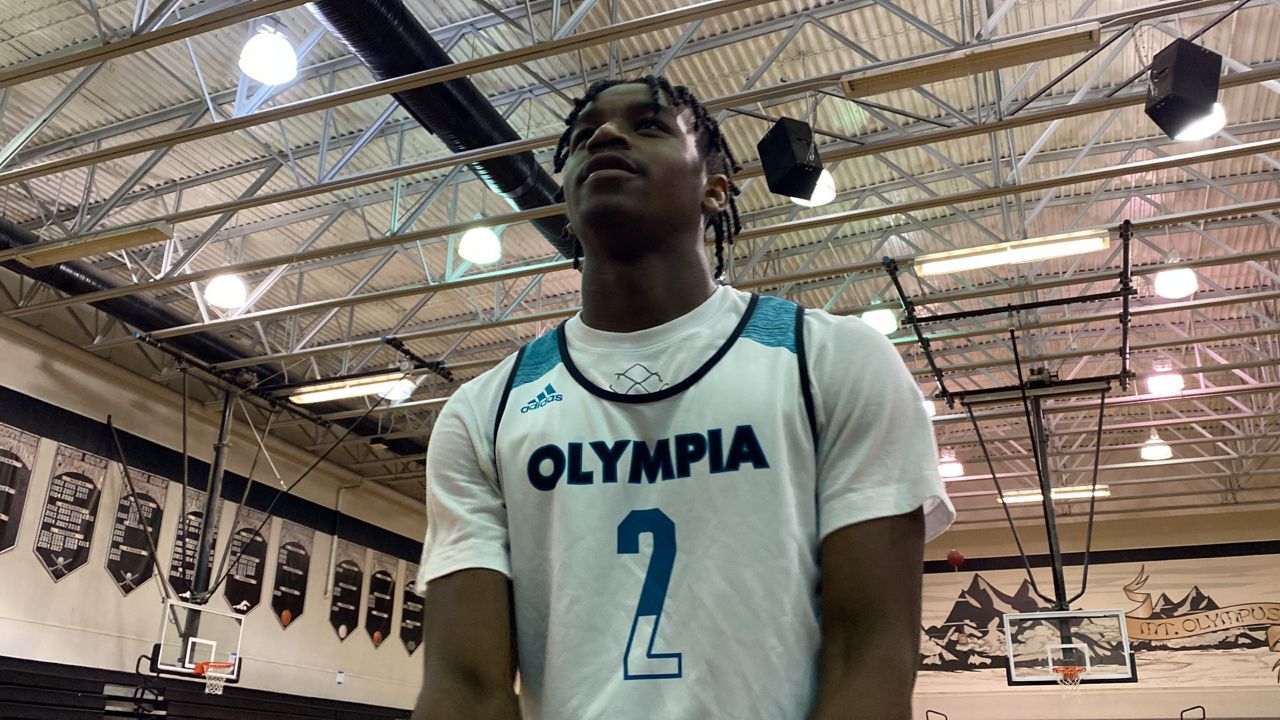 Two of the top teams in Central Florida as well as Class 7A met up last night as Orlando Oak Ridge travelled across town to take on Orlando Olympia.

The Pioneers of Oak Ridge scored quickly off the opening tap, but Olympia ran off seven straight points in response.  The Titans of Olympia led 7-5 midway thru the first but with two minutes left the score was tied at 10-10.  At that point the Titans exploded, closing out the quarter with an 11-0 run to lead 21-10.  Edgerrin James, Olympia’s outstanding junior, scored eleven points in the quarter.

Oak Ridge picked up the pace in the second quarter and it paid dividends.  The Pioneers got to within 26-20 at the four-minute mark of the period.  Oak Ridge’s up-tempo style got Olympia playing a bit faster than their comfort level and the Titans started rushing shots.  However, Oak Ridge was never able to tie the game or take a lead.  At the break, Olympia led by just three, 30-27.

The Pioneers hit a three on the opening possession of the third quarter to tie the score.  Olympia responded by scoring six straight points to open a gap.  The margin was just four, 38-34, in favor of Olympia midway thru the period.  It seemed every time that Oak Ridge looked like it might tie of take the lead, the Titans had an answer.  Going into the final period, Olympia led by just three 47-44.

The tight game continued well into the fourth quarter.  Olympia’s three-point lead held up until with just under four minutes to play, Oak Ridge was within one, 54-53.  Olympia’s James once again asserted himself, scoring four straight points to push the Titans lead to five at 58-53.  After an Olympia free throw pushed the Titans’ lead to six, James attempted to draw a charge.  Instead, he was called for a block and his fifth foul.  Now with 1:03 to play and the score 59-53, Olympia was without its primary player.  There was also enough time for Oak Ridge to close the gap and possibly send the game into OT or outright win the contest.  That didn’t happen as (a) Oak Ridge was unable to connect on drives at the rim, (b) Olympia controlled the defensive glass, and (c) the Titans hit their free throws.  Olympia expanded their lead at the free throw line to win by seven, 63-56.

James, who goes by the nickname “Jizzle”, continues to elevate his game seemingly every time out and validate why high-major college coaches monitor his play.  A superior combination of strength, speed, and explosiveness, James is tough to keep from the basket.  Once there, he scores creatively with either hand thru contact.  James is a dangerous jump shooter, especially from the mid-range.  He has excellent vision as the playmaker, and numerous times during the game found teammates for easy points against the Oak Ridge press.  James also does a good job taking care of the basketball, helping out on the glass, and has the ability to be a disruptive defender.

Oak Ridge’s Johnson, a 6’5 sophomore, somehow flies under the radar, but when watching him play, Johnson just has the look of mid-major-plus prospect.  He’s tough on the glass at both ends, gets out swiftly in transition to score, and has the ability to put the ball on the floor and score after two or three dribbles.  He knocked down his lone jumper of the contest, a three, and it seems like that will become a weapon for him sooner rather that later.  Johnson reminds us of OCP’s Ven-Allen Lubin in terms of size, build, and playing style at the same age.  Lubin worked hard and became a Notre Dame signee.  It isn’t farfetched to think that Johnson could do likewise.