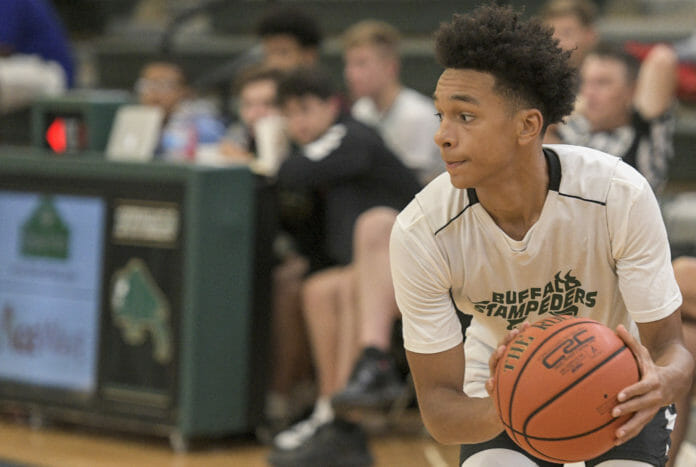 It is extremely rare for a Class 1A school to leave the comfy confines of home and travel to a larger school power late in the high school season.  However, that is what happened last night as Madison County, the favorite to take home the Class 1A title this season, ventured to The Villages, a 5A school with its own designs on a championship.

Both schools play at a fast pace and it was The Villages that made the most of the increased tempo.  In the first minute of play, a driving lay-up from Brandon Farmer and a three from Ezekiel Williamsonbey gave The Buffalo an early 5-0 lead and forcing a Madison County timeout.  The Cowboys continued to struggle to manufacture points despite the open looks that got from the perimeter.  A free throw from Vincenta Mitchell finally got them on the board, but at the midway point of the quarter, the score was still in favor of The Villages at 10-3.  Despite The Villages inside duo of Farmer and Petyon Williams each picking up two personal fouls in the quarter, the Buffalo continued to have success against the Madison County press, ending the first quarter up 22-7.  The score might have been closer had Madison County’s Travis Jay not passed up some easy shots.  Instead, he got the ball to teammates that just couldn’t convert inside.

Despite both bigs sitting on the bench with the two fouls, The Villages continued to hold off Madison County, leading 39-25 with three minutes left in the second quarter.  Tre Mann of The Villages caught fire early in the quarter, knocking down a pair of threes and converting a three point play.  Madison County kept at it and their outside shots finally started to fall and they also forced some turnovers that they converted into points.  A 7-2 run by the Cowboys brought the lead down to under double digits at 41-32 with 1:15 left to play in the period.  Jay became more of a scoring threat during the run, using his strength to get into the lane score.  By the time the period was over, The Villages lead had been cut to eight at 45-37 and it looked like the second half would be tightly contested.

That’s how the third period started out with Madison County opening up with some early points to get to within five at 47-42 one minute in.  Also, now it was Jay’s turn to faceguard Mann at the offensive end, and the two stars began to engage in some trash-talking.  Mann answered first after escaping from Jay, getting the ball and dribbling into a smooth mid-range jumper that was all net.  Jay’s response was an “and one” play at the other end on the next possession.  What the standing room only crowd had hoped would become a mano y mano duel actually turned into a long run for The Villages.  With both Farmer and Williams back in the game, The Villages were able to dominate on the inside.  Farmer had 8 points and 7 rebounds in the quarter while Williams contributed 7 points and 1 rebound during the run.  The Villages would eventually grow the lead to as much as seventeen before Madison County called timeout with 3:27 left in the period.  The Cowboys responded quickly after the TO, getting to within eight at 61-53 with 1:50 left in the quarter.  The Buffalo then stampeded out on an 8-2 run, re-establishing a double-digit lead at 69-55 with one quarter left to play.

Other than a Tre Mann dunk over a hapless Madison County defender that nearly cleared the gym, the fourth quarter was anti-climactic as The Villages maintained their double-digit lead throughout the quarter.  At one point, there was hope that The Villages would hit the Century mark.  Alas, they ran some clock after getting to 98 points with just under a minute to play, missing the shot attempt with fifteen seconds left in the contest.  Madison County decided to run out the clock without attempting a shot in order not to have that hundred hung on them.  Despite the final score of 98-80 in favor of The Villages, it was a very entertaining game!

Mann of The Villages led all scorers with 32 points.  Williamsonbey added 15, Terry Ivery contributed 13 and Farmer finished with 12 points.

For Madison County, Jay paced the Cowboys with 26 points.  Dillan Lawson was next up with 14 points while both Mitchell and Demarion Brown each notched 13 points and Chris Simmons finished with 11 points.

No doubt people are raving about the Mann dunk in the fourth period.  It was reminiscent of Vince Carter’s dunk over a helpless Fredric Weiss in international competition (go ahead and Google it youngins; we’ll wait).  However, Mann had an even more impressive play when he drove in from the right wing, elevated to the basket, and after being greeted near the rim, he moved the ball over to his left hand to complete an “and one” play.  No, it wasn’t a duplicate of Michael Jordan’s famed shot vs. the Lakers from back in the day, but it wasn’t far off.  Mann continues to display beyond-NBA three point range and an ability to get almost any shot he wants.  Sometimes he settles for deep jumpers but that is part of the package.  Mann also is an adept passer and gets teammates easy shots because he attracts so much defensive attention.

Madison County’s 6’3 Jay is already ticketed to play football for Florida State in the fall.  He came in averaging somewhat modest numbers of 12 points, 7 rebounds, 6 assists, and 3 steals per contest for the season per the Cowboy coaching staff.  He certainly upped those numbers, finishing with those 26 points but also 9 rebounds, 6 assists and just three turnovers.  He scored 18 of those 26 in the second half.  Jay did a great job of handling any extended defensive pressure by The Villages, often finding teammates well downcourt for easy scores.  He made excellent shot vs. pass decisions when taking the ball to the rim.  His strength allows him to score in traffic at the basket with relative ease, but he certainly has plenty of “shimmy and shake” to get past defenders on the dribble.  Should Jay decide to do his best Charlie Ward impression and try his hand at hoops for the Seminoles after football season is over, no doubt Coach Hamilton would welcome him.