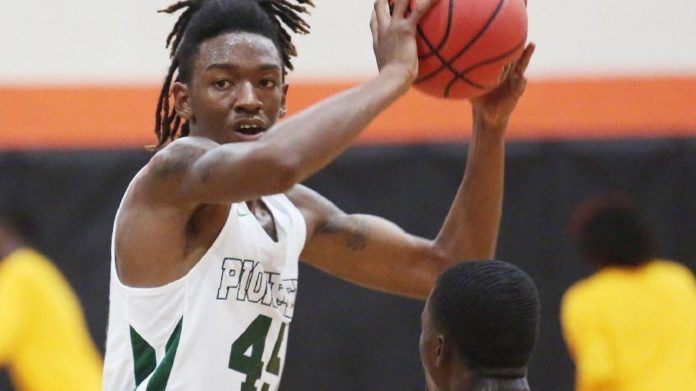 We made it down to Tampa for the Saturday session of the ARS National Hoop Fest hosted by Berkeley Prep.  By the end of the day most (not all) of our questions had been answered.

The Montverde vs. IMG debate

Two weeks ago, IMG defeated Oak Hill Academy 72-67 on a neutral court.  Oak Hill was playing without Cole Anthony, who some scouts regard as the top player in the Class of 2019.

On Saturday, in front of a national ESPNU audience, Montverde took Oak Hill to the proverbial woodshed, jumping out to a big lead early and maintaining it the entire game.  By winning by a decisive score of 76-51 with Cole Anthony in the lineup for the Warriors, the Eagles of Montverde have every right to proclaim their superiority.

Still, we hope that Montverde and IMG can meet up in the Dick’s Nationals in April.  That will be difficult as Montverde is projected to be the #3 seed while IMG is projected as the #4 seed.  This means that the teams would only meet up in the title game, each having to beat an undefeated and higher ranked opponent (La Lumiere for IMG, McEachern for Montverde) to get there.  There is still a lot of basketball to be played and things could change, but that is the scenario right now.

Who is most SEC-Ready: Tyrell Jones or Tre Mann?

Based solely on their individual performances on Saturday, the nod goes to Mann.

Jones had his struggles against St. Pete in the first contest of the day.  He was just 1-7 from the floor and credited with eight turnovers.  He probably would have doubled his listed assist total of three if teammates had of converted some easy opportunities.  Jones was solid on the defensive end with his ability to harass opposing ball-handlers.  His strength, lateral quickness, and mind set on the defensive end should earn him minutes for the Auburn Tigers next season.

Mann’s offensive game is what sets him apart right now.  He had 25 points and 6 assists (vs. 1 turnover) on Saturday.  He was just 11-28 from the field overall and a paltry 2-11 from three point range.  Still, he has an ability to score from all three levels as well as create those scoring opportunities for himself.  He’s a better passer than given credit for and does a good job of finding teammates for open shots on the drive.  Defensively, he isn’t on the level of Jones, but the Gators need Mann’s offensive skills desperately next season.

Will the combined points for Tampa Catholic and The Villages exceed 140?

It did not, with the final score of 71-63 in favor of Tampa Catholic totaling 134.  The half-time score of 30-30 indicated that while both teams were evenly matched, neither was producing offense like usual.  The biggest reason for this is that each team was facing a higher caliber of opponent than normal.

Vernon Carey of University School and Cole Anthony of Oak Hill Academy are considered the top two players in the Class of 2019 right now.  Neither’s performance on Saturday will lock up a #1 ranking.

Carey had pedestrian numbers (for him) of 16 points and 9 rebounds against an overmatched Berkeley Prep team.  U-School got a big lead early on and didn’t need Carey to dominate to win by a large margin.

For Anthony, Montverde did an amazing job of double-teaming him and making him get rid of the ball.  It wouldn’t surprise if his 10 points and 4 assists were season low in both categories.

So, at the end of the day, it becomes a matter of preference: If you like dominating bigs with size, strength, and skills, then Carey is your guy.  If you choose a guard with size, scoring ability from all angles and distances, as well the ability to create plays for himself and others, then Anthony most likely sits at the top of your list.

Who gets the nod as the “most versatile player” in the Class of 2020: Scottie Barnes of U-School; Cade Cunningham of Montverde, or Jaemayn Brakefield of Huntington Prep?

Brakefield topped the scoring charts of the three with 29 points against Oakridge.  He definitely showed a high skill level, but not the overall game of the other two.

Barnes’ numbers of 14 points, 6 rebounds, and 7 assists were certainly of the stat stuffing variety.  What was more impressive was his ability to communicate and run the offense without having the ball in his hands.  He continuously moved teammates to where they needed to be, even before he got the ball.

Cunningham has the ball in his hands the most of the three, as the 6’7 junior plays point guard for Montverde.  He flirted with a triple double, notching 26 points, 7 rebounds, and 9 assists.  He showed an ability not only to get to the basket past smaller, quicker defenders but also knock down shots from beyond the arc.

After Saturday’s performance, Cunningham gets the nod, but Barnes is right there.

Highest riser, both on the recruiting charts and in the air: Harlond Beverly or Niven Glover?

Beverly had a solid game against Oak Hill, finishing with 9 points, 2 rebounds, and 2 assists.  He was part of a second half “dunk fest” for Montverde and Beverly arguably had the best one: a reverse jam after an open court breakaway.  Supposedly, a lot of high major schools are looking to get involved, and rightfully so.

However, we are giving the nod to Glover on this one.  Many of the national scouts left after the Montverde game, and they missed arguably Glover’s best game of the season.  While he did not get the opportunity to throw one down vs. Huntington Prep, his 21 points on 8-14 shooting was solid as he showed he could knock down perimeter jumpers with more consistency than in the past. Glover will most likely be one of the more coveted guards in the late signing period.

Battle of the Bigs: Balsa Kaprovica or Kofi Cockburn?

Cockburn certainly got the edge with 7 points and 7 rebounds in twenty-three minutes of playing time.  Kaprovica had two early baskets in the first quarter and looked like he would be key, but he ended up only playing just under eleven minutes the entire game, finishing with 4 points and 4 rebounds.  Montverde’s desire to trap Anthony at each opportunity led them to use a quicker lineup that included Omar Payne playing the “five” spot.

It comes down to what happens first: Achiuwa’s perimeter jumper becoming consistent or Walker’s body filling out and gaining strength along with it.  Both has solid games on Saturday with Achiuwa going for 25 and 9 while Walker finished with 19 and 11 before fouling out.  Walker showed a more diverse offensive skill set while Achiuwa was simply relentless in getting to the basket.

Moody is an important complementary piece to Montverde’s success but Thomas showed on Saturday that his ability to score is on par with anybody in the Class of 2020.  Thomas knocked down threes, converted drives thru contact in traffic at the rim, and knocked down shots off the dribble from a myriad of distances and angles.  Don’t be surprised if Thomas gets burdened with some “Curry-like” comparisons.

Howard looked very good on Saturday as he already has a solid skill set to play the wing at the next level.  However, Hawkins made a big splash on Friday night with 16 points against the sizeable front line of Huntington Prep.  He wasn’t bad Saturday against U-School either.  If he grows a few more inches as expected, watch out.

Who has the best motor: Christian Brown, Omar Payne, or Emmanuel Okpomo?

Okpomo got less than four minutes court time which isn’t enough to gauge his motor.  Both Brown and Payne got about 20 minutes each, and the numbers suggest Payne did the most with it.  Brown finished with just two points and five rebounds.  Oak Hill’s inability to get out in transition kept Brown from getting more than just six shot opportunities.  Payne tallied six points and five rebounds, all of those points coming on dunks in transition or lobs in the half-court.

Can the Oakridge “PG by committee” matchup with A.J. Hoggard of Huntington?

The Oakridge crew answered with a resounding “YES” despite the loss in overtime.  Hoggard did finish with 24 points and 7 rebounds, coming up big in the fourth quarter and overtime.  However, Zavian Smith (9 points), Niven Glover (21 points), and Emmanuel Adedoyin (14 points) were each impactful in building an Oakridge lead that they held through most of the contest.