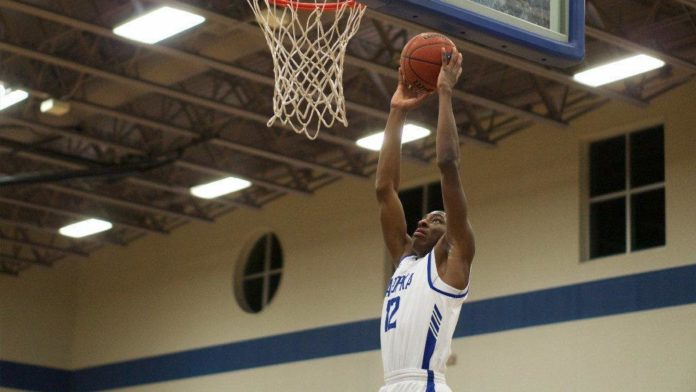 About a week ago at this time, there was a great deal of buzz surrounding last night’s game between Apopka and Windermere.  The Blue Darters had defeated Edgewater on the road while a couple of night’s previously, the Wolverines fell in triple overtime to the Eagles.  Apopka was ranked #1 in Class 9A while Windermere was a top five team in Class 8A.

Then the injury/illness bug hit Apopka.  Junior Zach Anderson suffered a lower back injury, point guard John Latimer took a blow to the head earlier in the week and senior leader Nate Louis came down with the flu.  Now down three starters, Apopka’s chances at Windermere on Senior Night, the first one ever at the two-year old school, seemed daunting.

Both teams were patient at the offensive end, sort of like two boxers feeling each other out.  At the midway point of the first quarter, the score was only 2-3 in favor of Windermere.  Things finally got going for both teams, especially the Wolverines.  After connecting on a trio of shots from beyond the arc, they amassed a 12-6 lead with 1:21 left in the period, forcing a Blue Darter timeout.  Apopka scored the last bucket of the quarter to make the score 12-8.

The second quarter would be played just as competitively.  Apopka tied the score at sixteen with five minutes remaining.  They took their first lead at 20-19 with 3:41 to play and now it was Windermere’s turn to call for time.  The host team got things straightened out and by the time the halftime horn sounded, Windermere led by the score of 28-25.

Windermere got off to a quick start in the third quarter but Apopka eventually got back to even at 31  with just under five minutes to play in the period.  Thanks to some hot shooting by junior Rudy Gatling with four three pointers in the period, Apopka regained the lead.  With one quarter left to play, the Blue Darters were in good position, up three at 40-37.

Apopka increased its lead early in the final period but Windermere got back to within one at 44-43 with 5:25 to play and Apopka took a timeout.  A minute later, Windermere scored to make it a tie ball game at 46-46 with 4:30 left in the contest.  Windermere’s Elliot York broke the tie with a three point play.  That would be the start of a game-ending 13-4 run for Windermere.  Wolverine senior Josh Colon hit a three to make it a 54-48 Windermere lead with just under two minutes to play.  Apopka was unable to recover.  Tre Moss of Windermere closed the game out at the free throw line for the Wolverines to win a tough contest by the score of 59-50.

Colon led Windermere with 17 points while Eric Canavan came off the bench to contribute 10 points.

For Apopka, Gatling led the way with a game-high 22 points.