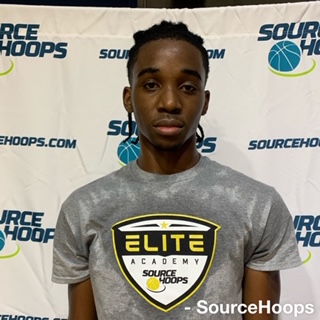 This past Saturday, SourceHoops.com put on its first ever Freshman-Sophomore Elite Academy in Orlando.  In a unique format, the invite-only players were placed into balanced teams and then given an opportunity to get offensively organized by current or former college level coaches before being thrown into games.  This made for an extremely competitive atmosphere and a higher-level of play than seen at many events of this type.  Several players caught our attention and we will highlight them in multiple reports as the week progresses.

Nate Sasser, Riviera Beach Suncoast: The 6’6 sophomore proved to be an outstanding all-around player on Saturday.  He has a great first step on his drive, excellent change of pace/change of direction moves with his dribble, and scores consistently from all three levels.  Also impressive was his ability to see over the defense and make quick decisions that usually turned into easy points for teammates.  It is easy to see him playing any of the perimeter positions on the floor in the future.  With his size, length, and quick leaping ability, Sasser is a grab and go rebounder and usually produces points when leading the break.  Defensively he is active, covers a lot of ground quickly, and uses his lateral speed and quickness to great effect in breaking up passes and disrupting opposing offenses.

Daren Leath, Apopka: The 5’10 freshman made an impact right out of the gate.  A quick guard, he pushes the pace and does a good job of finding open teammates for good shots.  Leath also demonstrated he can score, knocking down some shots after penetration as well as a jumper from beyond the arc.  Defensively he is a nuisance with active hands, feet, and a willingness to be disruptive the full 94 feet.

Isaiah Brown, Orlando Christian Prep: We’ve seen the 6’2 freshman at quite a few events over the course of the summer and fall and Brown never fails to leave a positive impression.  His jumper is smooth and consistent to the three-point line and Brown rebounds well for his size.  Brown’s high basketball IQ and court savvy allow him to play with the composure of a much more experienced player.

Tristan Wilson, Miami Norland: The 6’2 freshman was one of several Viking players that came for the event and judging from their play, Norland should continue to be a power in the GMAC and state.  Wilson has a nice jumper which goes down from mid-range out to the arc.  He gets out in transition and scores and puts in work on the boards.  Wilson also proved to be an alert passer, finding cutters in the lane for scores or making the right decisions with the ball in transition.

Braylon Jackson, Sarasota Riverview: The 6’3 sophomore should be a key contributor on a talented Riverview team this coming season.  While he didn’t show a lot in the way of scoring tools in the half-court, Jackson was quick to run the floor and get easy baskets in transition.  He also was very active on the glass, especially at the offensive end where his quick leap and reach allowed him to keep several misses alive until he could grab the ball.  Jackson is a good athlete that plays with a great deal of energy at both ends of the court.

Eduardo Placer, Oviedo The Master’s Academy: The 6’4 sophomore guard displayed an impressive skill set on Saturday.  The lefty is an excellent ball-handler and gets to the basket with ease and frequency.  He sees the floor well and makes good decisions on the move.  Placer can create and make his own shot from all three levels.  With his scoring tools and court savvy, he performs at a high rate at either guard spot.  Defensively he moves his feet well and is alert for lazy passes into his area.

Stone Bureau, Riviera Beach Suncoast: The 6’0 freshman continues to be an eye-catcher as we’ve seen him play well at a couple of different events prior to Saturday.  Bureau is solid with the basketball, sees and reads the floor well and makes great decisions on the move.  He does a good job of controlling tempo and knowing when to speed up or slow down.  Bureau scores well when heading to the basket and has a solid mid-range game that includes both a jumper and floater.  Defensively he is alert to jump the ball-handler, force a turnover, and turn steals into scores.