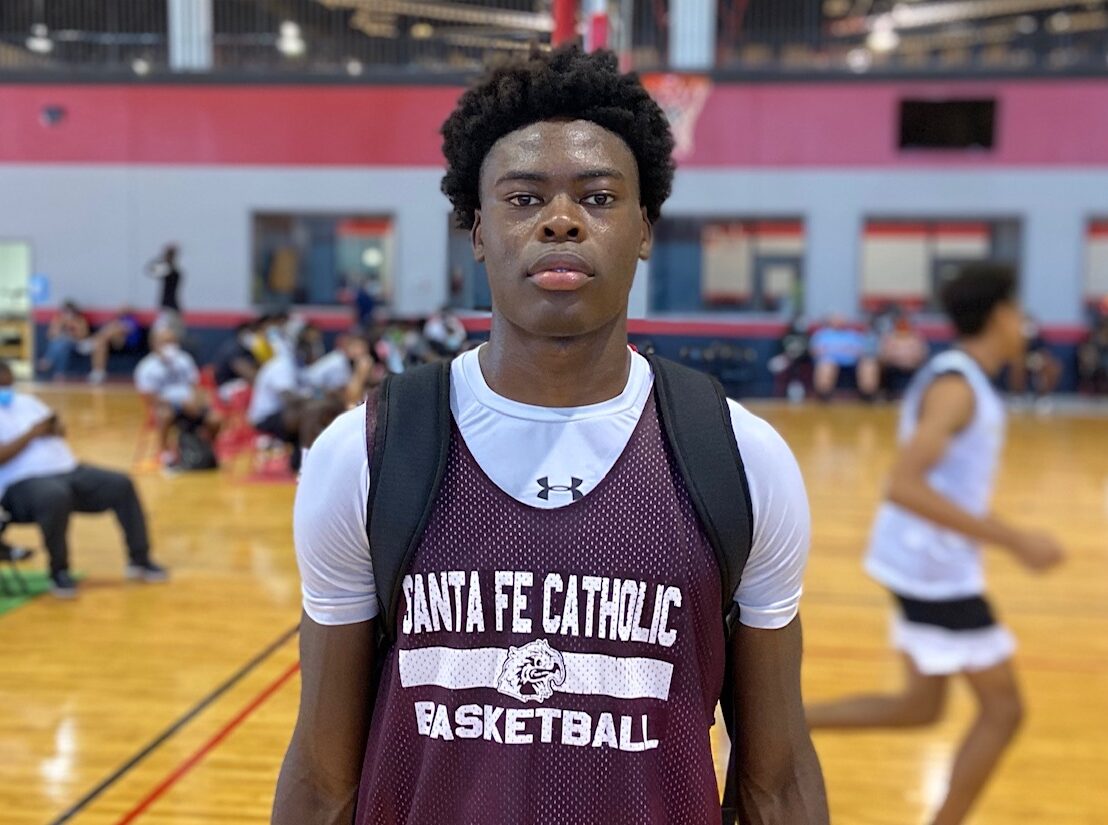 In this report, we shine some light on players from teams we have seen in the past, including a group of younger players that show tremendous promise.

Warner Davis, Team Tim Hardaway: A 6’1 junior out of Miami Palmetto, Davis is a blaze of energy and aggression.  He is very quick to the basket, has some wiggle to his dribble, and is creative in finding ways to get his shot up and in in a crowd.  Davis earns lots of trips to the foul line and converts free throws at a high rate.  His perimeter shot is a bit streaky but Davis makes enough that he must be respected to the three-point line.  He brings the same level of intensity to the defensive end of the floor.

Zach Poyser, TGFB 17U: Just a sophomore from Wildwood, the 6’0 Poyser pushes the pace at every opportunity.  He makes good reads in transition and puts a lot of pressure on a defense.  Poyser is a respectable shooter from deep, makes good shot vs. drive vs. pass decisions when coming off ball-screens, and rebounds well for his size.  Playing for a winning program at Wildwood also helps establish a pedigree of success.

Elijah Mahi, 1Family 17U: The 6’7 junior from Potter’s House in Jacksonville was very tough to contain on Saturday.  Mahi is very adept at using his big frame to overpower defenders and muscle his way to buckets inside.  If given room, he will drop in perimeter shots out to the arc.  Mahi is also skilled in finding teammates cutting to the basket for scores.  He has the ability to be a grab-and-go rebounder.  Defensively, he is physical and good at anticipating weak passes into his area.

Elijah Elliott, E1T1 15U: The 6’3 freshman out of Orlando Oakridge is productive without being ball-dependent.  His perimeter shot is reliable, he scores well with either hand at the basket and looks to get teammates involved early and often in the contest.  Elliott’s length, foot speed, and ability to anticipate make him a disruptive defender.  He covers a lot of ground quickly, gets a lot of tips and deflections, and rarely gets beat when defending on the ball.

Marcus Allen, E1T1 15U: A 6’6 freshman starter at Miami Norland, Allen is considered one of the state’s best prospects in the 2024 Class, and with good reason.  He has all the desired physical tools: length, leap, speed, quickness, and size.  Allen also has a good skill set as he gets to and scores at the basket, attacks the offensive glass, can post up smaller defenders or go around bigger ones and knocks down open shots when given the opportunity.  Defensively his physical gifts allow him to guard a variety of positions and he brings the proper aggressive mindset to that end of the floor.

Asa Newell, 1Family 15U: A 6’6 freshman from Choctawhatchee, this long, lean, lefty has a lot of potential.  He already possesses a dangerous perimeter shot and as his body matures and strengthens there is no doubt that he will improve his ability to get to and score at the basket.  He moves well on the court and puts in a solid effort in the rebounding department at both ends.

Alvin Tumblin, 1Family 17U: The 6’6 senior out of Lakeland Santa Fe Catholic has a handful of D-I offers but hopes to get more from higher levels with his play this spring.  Playing like he has been shot out of a cannon, Tumblin is explosive in transition and in attacking the offensive glass to violently put back missed shots.  His offensive game continues to expand as his ability to score from the perimeter is improved. Tumblin has the potential to be a defensive terror thanks to his length, speed, and quickness.

Karter Knox, E1T1 15U: The youngest of an athletically gifted clan, the 6’5 Knox averaged double-figures this season for a young Tampa Catholic squad.  While he may not reach the height of older brother and New York Knick Kevin, Karter has a stronger frame and knows how to use it.  He is very good at carving out space to get rebounds at either end as well as absorbing contact and still putting the ball in the basket.  Knox converted a couple of open threes on Saturday and looked comfortable doing so.  He has a real chance to make a mark on the national stage this spring and summer.

Tyler Johnson, E1T1 15U: A 6’4 freshman out of Apopka, Johnson is a combo forward that does a little bit of everything.  He showed he can attack the defense and the basket with the dribble, chase down missed shots and quickly covert them into points, and knock down open shots from the perimeter.  He gets up and down the court quickly in transition and doesn’t mind the physicality of play under the basket.

Isaiah Brown, 1Family 15U: A 6’3 freshman out of Orlando Christian Prep, Brown was a contributor on an undefeated state title team.  With this group, he has a chance to unleash his arsenal of offensive tools.  Brown is surprisingly good a creating and knocking down shots off the dribble from beyond the arc.  He reads ball-screens well and generally makes the right read.  Brown is also quick to move the ball to open shooters on the perimeter.  There is a lot of defensive potential and versatility for Brown due to his generous wingspan and high basketball IQ.