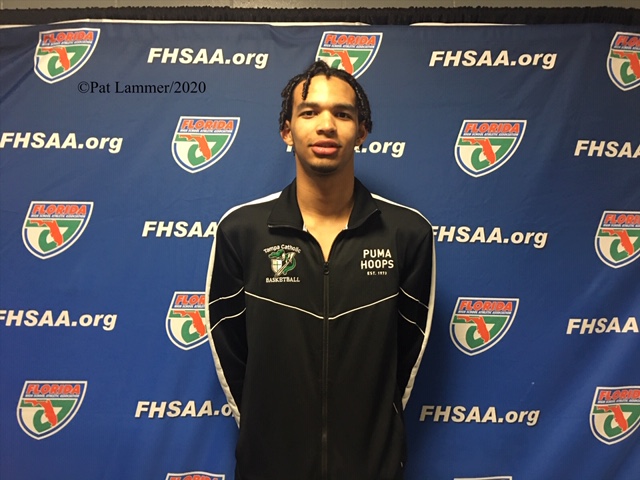 LAKELAND — The 2020 FHSAA Boys State Basketball Tournament continued Thursday with six semifinal contests at the RP Funding Center. The tournament runs through Saturday. Here are the top performers from Day 2:

The 6-foot-9 Morehead State signee put his stamp on the 4A semifinal with a 22-point, 12-rebound, 4-block performance. Broome (pictured) made 8 of 13 from the field. He is one of five senior starters for TC. Asked what Morehead State coaches like about his game, he said: “They see a lot of potential. Like my soft touch around the rim, being able to space it and high IQ.” Broome grew up in Plant City. … Marcellus Crutchfield was a perfect 5 for 5 shooting and finished with 16 points.

The senior guard’s controversial shot at the buzzer of the first overtime was ruled good by officials and sent the game into a second overtime tied 62-all. Reynolds finished with 15 points, 8 rebounds, 4 assists and 2 steals. Senior D-I forward prospect Jalen Haynes had a double-double (17 points, 13 rebounds) before fouling out. Kirt Bromley scored 5 of his 7 points in the second OT.

The Nova Southeastern University guard recruit went for 29 points in the semifinal win over Naples. 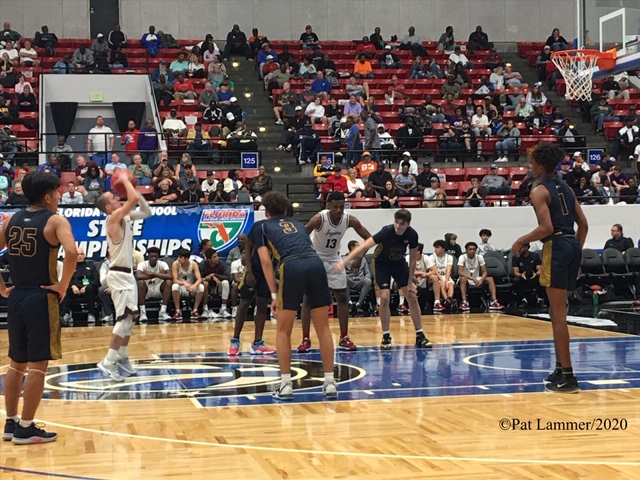 Graziani was 7 for 15 from the floor and 15 of 15 from the free-throw line. He played all 32 minutes. Pines Charter big Amarachi Ujagbor was a major presence in the paint with 20 points and 10 rebounds. Pines Charter is on a quest to win its first boys basketball state championship.

The senior guard tandem was terrific, combining for 44 of the team’s 66 points in the double-OT defeat. Gaines and Jones both are able to get into the lane and make plays. Jones made 8 of 13 field-goal attempts and finished with 20 points. Gaines was 8 of 22 en route to 24 points. They combined to make 5 of Columbia’s 6 3-pointers.

Clayton scored 21 points and grabbed 9 rebounds to go along with 8 assists and 3 steals for 29-1 Bartow. Joshua Simons had 16 points and 14 rebounds in the victory over East Lake.

The 6-foot-3 junior set the tone early for the defending state champions with 11 first-half points vs. Paxon. Squire would end the day 5 of 9 from the field — including 3 of 4 from 3-point range — and post a double-double (14 points, 10 rebounds). Seven of the boards came on the defensive end. Senior guard Chayse Culpepper and 2020 post Inady Legiste added 13 and 12 points, respectively. Defensively, the trio helped force 15 Paxon turnovers.

Adams’ final stat line of an excellent high school career: 29 points, 9 rebounds and 3 blocks in the loss to Stranahan. The Paxon star has nice size but the skills of a guard. Adams connected on 10 of 21 shots from the field — including 5 of 10 from 3-land — and had 8 defensive rebounds. The 6-6 Adams is headed to play at UCF in the fall. UCF coach Johnny Dawkins was in attendance.

The Murray State guard recruit connected on 9 of 23 field-goal attempts en route to a 22-point, 7-rebound performance vs. Bartow.

The 5-8/5-9 sophomore went for 18 points, 4 rebounds (second on team) and 2 steals for a young LHP squad playing without Brice Sensabaugh (knee). Berry shot 7 for 18 from the field (2 for 7 from 3). “For our first time here this team that we have is really special,” said Berry. “We’re definitely going to be back. We’re going to miss [senior] Vic [Brown].” Berry has opened some eyes and heads into an important summer period. He said he plans to play travel ball with Team MOAM.

7:00 — 1A championship game: Hilliard vs. Hawthorne

3:00 — 5A championship: Rickards vs. Pines Charter