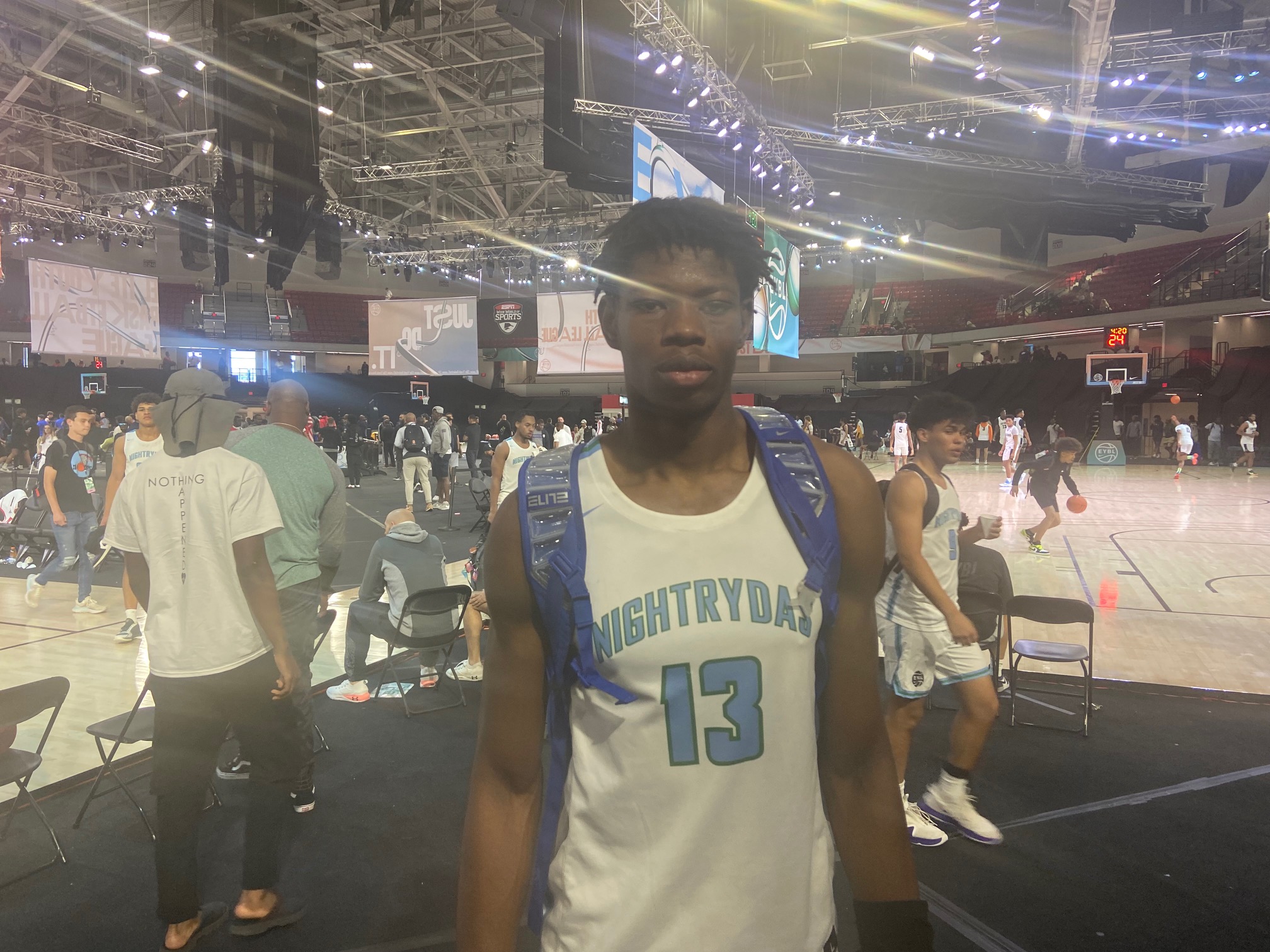 Our primary goal at the EYBL Orlando session was to cover Florida-based teams.  After that, we wanted to check out those teams that we had yet to see in this early part of the Travel Ball season.  Those two goals made it imperative that we catch Nightrydas Elite in all three age divisions (17U, 16U, & 15U).

The Nightrydas serve up a little bit of everything with this loaded roster.  They have a great 1-2 punch inside with 6’9 Jaylen Carey of Westminster Academy in Fort Lauderdale and 6’9 Jayden Hastings for Orlando Christian Prep.  Carey developed an injury on Saturday during the team’ game with CP 3.  He tried to give it a go Sunday morning against Team Griffin but was in only a short time and didn’t dress for the team’s game against the Florida Rebels later that day.  The box scores suggest he was productive on Saturday, scoring 10 points and grabbing 6 rebounds in the team’s win over Expressions and scoring 10 points later in the day against CP 3.  Hastings is an athletic big that has developed a reliable jump hook in the lane with his right hand and is a threat to connect when facing up from fifteen feet and in.  He had his best moments against Team Griffin on Sunday, going for 10 points and 9 rebounds and a highlight grab-and-go that resulted in a ferocious slam at the other end when no one dared to stop him.  Hastings rebounds his area well and quickly gets up and down the floor.  Guillerme Tesch, a 6’8 junior from North Broward Prep, provides additional size and skill.  He has the ability to stretch the floor and will drive the ball if the defender overplays or closes out poorly.  Justin Johnson, a 6’7 wing from Miami Doral Academy, plays a variety of perimeter positions for the squad.  He’s good with the ball for his size, gets to and scores at the basket and will make open perimeter shots.  Kjei Parker, a 6’1 guard from Bartow, gets the majority of the ball-handling and distribution duties.  He averaged over four assists per contest this weekend.  His mid-range game continues to be his calling card but he was a very good 4-7 from deep against the Rebels on Sunday.  Dallas Jones, a 6’5 wing from Gainesville The Rock School, stuffs the stat sheet with his ability to score, rebound, and get the ball to open teammates.  He is a strong driver that finishes well in a crowd, generally makes good shot vs. pass decisions on the move, and plays physically at both ends of the floor.  Marouf Moumine, a 6’6 wing from Cardinal Newman, may have been the team’s most pleasant surprise this weekend.  The lefty is long, a high-end athlete, and an instinctive scorer.  He has a quick first step, scores with great body control and touch inside, has a respectable jumper, and anticipates the passing lanes well on the defensive end.  Nate Sasser, a 6’5 guard from Riviera Beach Suncoast brings more versatility to the floor.  He can be found operating at either guard spot, attacks the basket, and does a solid job rebounding at both ends of the floor.  Nigle Cook, a 6’5 wing from Deland, was another pleasant surprise this weekend.  Long and lean, he not only finishes well above the rim, but has a solid stroke from deep, and is disruptive on the defensive end with his quickness and athleticism.  Mason Brown, a 6’5 forward from Alachua Santa Fe, and Gabe Fajardo, a 6’3 guard from South Dade, bring different elements to the game off the bench.  Brown brings energy, effort, and a nose for the ball while Fajardo can score in bursts.

We had every intention of watching this group play Saturday afternoon against BABC (Boston Amateur Basketball Club).  However, BABC had issues with flight plans and were unable to make the game.  This was quite disappointing to us as we were very interested to see the front court trio of Malik Abdullahi, a 6’7 sophomore at Columbus in Miami, 6’8 Sammie Yeanay out of Gainesville The Rock School, and 6’8 Ian Smikle from Riviera Beach Suncoast.  Based on official EYBL stats, Yeanay averaged a solid 17 points and 6 rebounds over the course of three games.  We also wanted another look at Elijah Duval, a 6’3 guard from Stuart Martin County that was so impressive at the Kingdom of the Sun tournament in Ocala back in December. His stat line for the three games was 13 points and 4 assists per game.

This is the group that has EVERYONE talking.  They ran roughshod over their opponents this weekend, averaging just over 84 points per game and holding opponents to a mere 50 points a contest.  The core of the group has been together for quite awhile and it shows on the court.  Scouts will no doubt focus on the play of 6’8 freshman Cameron Boozer out of Miami Columbus, and with good reason.  As if his size, skill, and savvy, weren’t enough, he’s a very good athlete and just knows how to play regardless of the situation.  He dropped in a pair of three point shots in the Friday night game we took in, along with his usual scoring around the basket, beating the defense down the floor in transition and putting back missed shots.  As good as a shooter as he appears to be, he surprisingly struggles from the foul line.  Twin brother Cayden Boozer, a 6’4 freshman at Columbus, isn’t along for the ride as he is a high-level player in his own right.  A pass-first but not pass-only point guard, Cayden sees the floor well, makes good decisions with the ball, gets the ball to the right people at the right time and scores primarily inside the arc in transition and floaters in the lane.  He too has a high basketball IQ, is an alert defender, rebounds well at both ends and is quick to 50/50 balls.  Alexander Lloyd, a 6’3 freshman at Westminster Academy, has all the athletic tools to be flashy but isn’t.  He lets the game come to him and makes the most of his opportunities.  Lloyd is a lethal combination of slasher and shooter, a lengthy defender that covers a lot of ground quickly, and a player with not only a high ceiling but an elevated floor to start from.  Dwayne Wimberley, a 6’5 freshman at Fort Lauderdale Dillard, scores inside and out, routinely beats the defense in transition, out-battles bigger opponents on the glass, and is a versatile defender.  Dante Allen, a 6’3 freshman out of Miami Riviera Prep, is a glue guy that just seems to make all the right plays at all the right times.  He has a surprising combination of speed and strength, can blow by bigger defenders as well as overpower smaller ones, and is comfortable at either guard spot.  Benny Fragela, a 6’2 freshman at Columbus, struggled mightily with his perimeter jumper on Friday night but that didn’t affect his effort or willingness to sacrifice his body at either end of the floor.  Romari Robinson, a 6’4 wing from Miami Senior, is more potential than polished product right now but his skill level is quickly improving and he is already a solid athlete. In the game we took in on Friday, Robinson played everything from point guard to power forward.