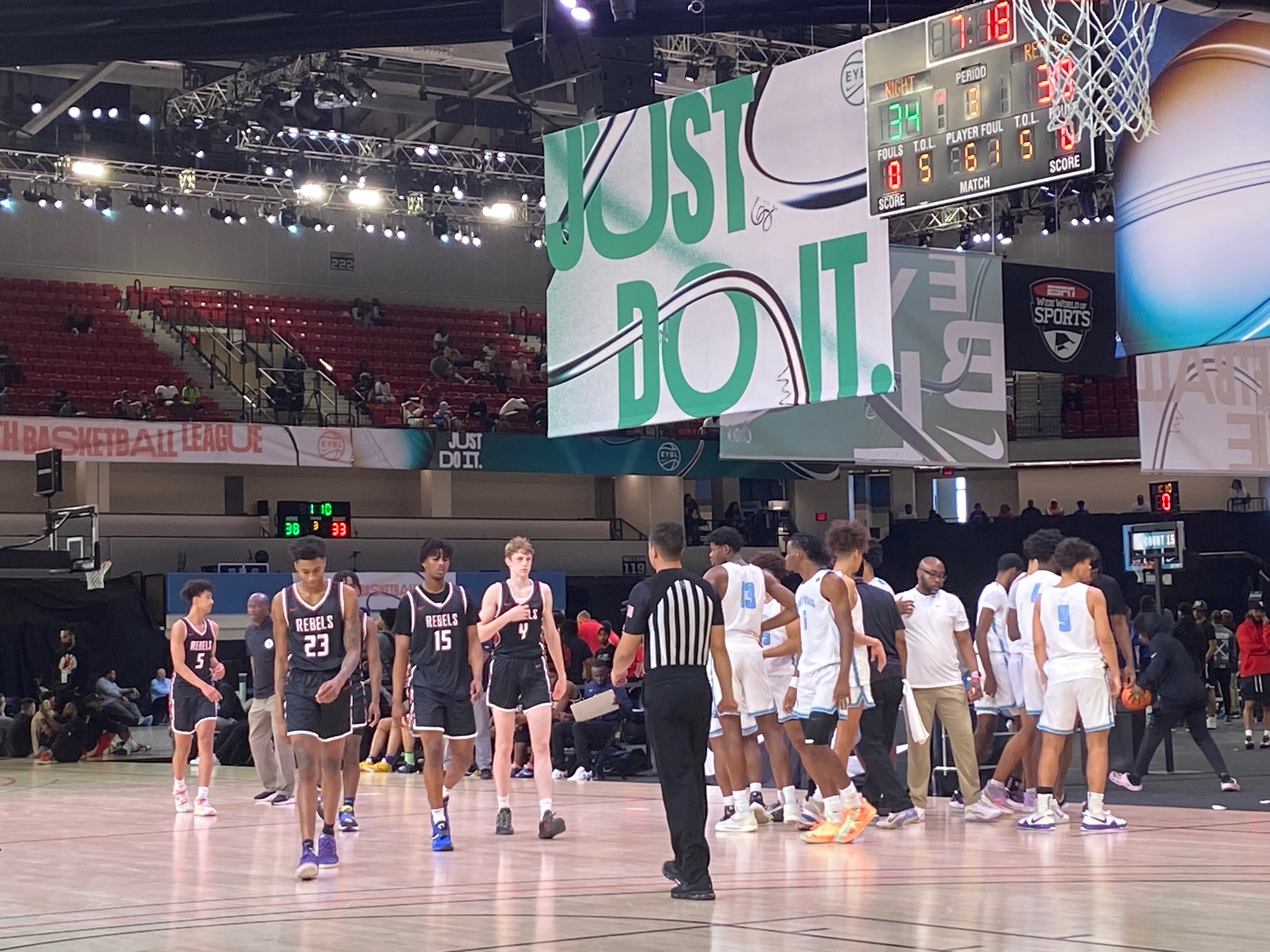 We were fortunate enough to attend the entire EYBL session this weekend at Disney World’s ESPN Wide World of Sports Complex.  Each of the forty EYBL 17U teams played four games this weekend in front of college coaches from all levels.  A battle for bragging rights took place between the Florida Rebels and Nightrydas Elite in each team’s last game of the weekend.  Here is the blow-by-blow.

Neither team came out of the gate quickly. The Rebels missed their first shot and then turned the ball over on their next three possessions.  Meanwhile, all the Nightrydas could manage in that time were three free throws on five attempts from 6’7 junior Justin Johnson of Miami Doral Academy after being fouled on a drive and later on a three-point attempt.  Windermere’s 6’8 junior Sean Stewart finally got the Rebels on the board with one of two free throws  and then after a miss by Nightrydas, Jordan Burkes, a 6’7 junior at Kissimmee Central Point Christian, dunked on the break to tie the score at 3-3 with just under six minutes to play in the first quarter.  Two free throws from Sam Walters, a 6’8 junior from The Villages and a transition basket from Stewart gave the Rebels a 7-3 lead.  Johnson responded for the Nightrydas with a pair of free throws and then the team got their first field goal of the game, a three, from 6’1 Kjei Parker of Bartow, to go up 8-7.  A few possessions later, Parker hit another three to increase the Nightrydas margin to four at 11-7 with under three minutes left in the quarter.  The Rebels’ Walters got fouled inside and connected on both free throws to bring them back to within two at 11-9 with 2:37 left in the quarter.  That would end the scoring for both teams in the quarter as the Nightrydas missed three shots while the Rebels missed three shots and a pair of free throws.

The second quarter found the teams playing at a bit better pace.  After turnovers by each team, the Rebels tied the score at 11-11 in a drive by Burkes.  The Nightrydas regained the lead as Nigle Cook, a 6’5 junior from Deland, scored on a drive and after a Rebels turnover, Johnson converted one of two free throws.  The Rebels drew back to within one after 6’4 senior Fabio Baselli scored on a drive.  Now both teams seemed to have gotten warmed up and were playing more efficiently.  Guillerme Tesch, a 6’8 junior from North Broward Prep connected on one of two free throws and then Parker scored on a drive to make the score 17-13 with under five minutes to play in favor of the Nightrydas.  Jizzle James, a 6’2 junior from Orlando Olympia, drilled a three to get the Rebels back to within one.  Parker responded with a pair of free throws for the Nightrydas after being fouled on a mid-range jumper.  The Rebels’ Tristan Gross, a 6’5 junior from St. Petersburg, got a floater to fall but Dallas Jones, a 6’4 junior at The Rock School in Gainesville answered with a drive for the Nightrdyas to make the sore 21-18 in their favor.  Undaunted, Basilli scored on a floater for the Rebels.  Jadyn Hastings, a 6’9 junior at Orlando Christian Prep returned the Nightrydas lead to three with a bucket inside.  After a couple of empty possessions by both teams, Carson Cooper, a 6’9 senior at IMG Academy, scored inside and then the Rebels took their first lead at 24-23 after a bucket inside from Stewart.  Hastings grabbed the lead back for the Nightrydas but with forty-five seconds left, Basilli connected on a three to give the Rebels a 27-25 lead. The Nightrydas closed out the quarter with a pair of threes, one from Parker and one from Johnson, to re-take the lead and go up four at the break, 31-27.

Johnson opened the third quarter by hitting a three to give the Nighrydas their biggest lead of the game at 34-27.  The Rebels responded with a 7-0 run as Gross hit a three, James scored in transition as did Stewart.  With 6:23 left in the quarter, the score was tied at 34-34.  Johnson hit one of two free throws for the Nightrydas and a bit later Nate Sasser, a 6’5 junior at Riviera Beach Suncoast, connected on a long two.  Stewart stopped the Rebels three possession drought with an offensive rebound score but Haystings responded with a jam inside for the Nightrydas.  A three from Jason Jackson, a 6’4 junior at Sarasota Riverview, knotted the game at 39-39 with just under three minutes to play.  A Parker three on the Nightrydas’ next possession broke that tie.  Both teams then went several possessions without points.  Dontrell Jenkins, a 5’10 junior at Alachua Santa Fe, connected on two free throws to get the Rebels to within one but Jones scored in transition a few possession later for the Nightrydas.  With thirty seconds left in the quarter.  Cooper was fouled inside and converted both free throws to get the Rebels back to within one.  The Nightrydas were unable to score on the final possession of the period and with one quarter left to play, they were up one, 44-43.

A three from Jones at the start of the fourth gave the Nightrydas some breathing room, but it didn’t last long.  The Rebels responded with a 6-0 run as James hit a mid-range jumper, Stewart put back a miss and Burkes gave the Rebels the lead with a slam in transition.  The Nightrydas tied the game at 49-49 after a drive and score from Sasser with 5:14 to play.  However, the Rebels’ run wasn’t done.  Jackson slammed on home on the break, Basilli dropped in a bucket and then Stewart scored in transition, was fouled, but could not convert the three-point play opportunity.  With three minutes remaining, the score was 55-49 in favor of the Rebels.  A transition basket from Parker ended the Nightrydas’ scoring drought.  That bucket was answered by a James drive and score in traffic with 1:49 left to play to make the score 57-51.  After a pair of empty possessions for both teams, James was fouled to stop the clock as time was getting away from the Nightrydas.  He made both to push the Rebels lead to eight at 59-51 with just thirty-five seconds left to play.  Parker converted one of two free throws for the Nightrydas but Gross of the Rebels converted both of his free throws to push the Rebel lead to nine at 61-52.  The Nightrydas final shot attempt, a three, was off target and the Rebels win the EYBL bragging rights for Florida by the score of 61-52, a victory much more difficult than the final score would indicate.

Stewart’s 13 points and 16 rebounds led the Rebels while James added 11 points and 5 assists.

The Nightrydas were led by Parker’s 19 points, including 4-7 from deep, while Johnson had 13 points and contributed 5 assists.