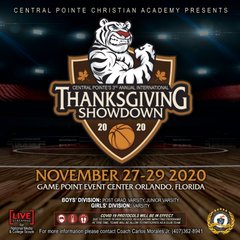 We took in the opening day of CPCA’s third annual International Thanksgiving Showdown at the Game Point Event Center in Orlando.  Teams from as far west as Washington State and from Puerto Rico in the east attended this thre- day event that has divisions for Post-Grad, Varsity, and Junior Varsity.

A larger-than-anticipated crowd was on hand for this game as apparently the matchup created a lot of buzz on social media.  Dynasty is an independent while Downey plays in the challenging Sunshine Independent Athletic Association (SIAA).  Playing with eighteen-minute halves, the game was knotted at nine after four minutes of play.  Dynasty then took a lead behind some torrid three-point shooting, going up seven, 20-13, at the ten-minute mark.  Downey kept within striking range as the half went on.  With four minutes left in the period, Downey was within two at 29-27.  At that point, Dynasty again got hot from deep, outscoring Downey 9-5 which included a 5-0 run to end the half.  At the break, Dynasty led 38-32.

The close and competitive play continued in the second half.  Downey finally tied the score at 47 at the thirteen-minute mark.  The lead changed hands a couple of times as play continued.  With thirty seconds to play, Emmanuel Maldonado drained a three to give Dynasty a 78-77 lead.  Ten seconds later, Prince Ebwea of Downey connected on a mid-range jumper to grab a on- point lead for the Patriots.  DeAndre Hield of Dynasty scored inside with twelve seconds left to give his team a one-point lead.  With twelve seconds left, Downey’s Jaythan Bosch hit one of two free throws to tie the score at 80 and overtime looked like a sure thing.  However, Dynasty turned the ball over and Ebwea was fouled.  He converted the first but missed the second with five seconds left.  Dynasty had time but couldn’t get off a good shot and Downey Christian advanced with an 81-80 win.

Maldonado of Dynasty was sensational in his performance with 35 points.  He connected on deep threes off the dribble, many heavily contested.  He has the speed, handles, and court vision to break down any defense and get a good shot for him or his teammates.  Reportedly, he needs some academic work to be eligible to play at a collegiate level, but the talent is there.

Ebwea led Downey with 20 points, 14 coming in the second half.  He is at his best when can find an open driving lane and head to the hoop.  He also had developed at fairly reliable mid-range jumper.  He is a passionate rebounder and defender.

Bosch not only added 19 points for Downey but his cool, calm demeanor kept the team under control when the game got tense.  He didn’t do any one thing great on Friday but did enough of the major things (scoring, assists) and all the little things (limiting turnovers, harassing the ball-handler, leadership) to help Downey come away with a victory.

This game was played with sixteen-minute halves and it didn’t take long for CPCA to assert its dominance.  The White Tigers led 7-3 after four minutes but then held Conrado to just five points the remainder of the half while scoring 25 of their own.  However, the team looked like it was suffering a “Thanksgiving Hangover” as their 32 halftime points should have been close to twice that if they had played the way there are capable (and somewhat expected) of playing.  In fact, the coaches were so upset with the starting crew that they were pulled after two minutes in the second half for their lackluster performance. Central Pointe won easily, 55-23, but will have to take their game up several notches if they want to win this event.

These are two high school teams playing under “aliases” due to their respective state association rules.  This game was already at the break when we got to our seat.  Shabazz led 40-39 at halftime, so we figured we were in for a competitive half of play.

Big Blue opened the period with a 12-5 run to grab a 51-45 lead with just over nine minutes to play.  Shabazz bounced back, using a 12-8 run of their own to get back to within two, 59-57, with four minutes to play and we buckled in for another nail-biter.

Unfortunately, that didn’t happen.  Big Blue scored the final five points of the game to win 64-57.

While we don’t have total scores for players in this game, it was clear that Big Blue’s 6’6 senior Shane Nowell was the team’s Top Gun.  An Arizona signed and considered a top seventy player in the country, Nowell not only has great physical attributes such as size, speed, quickness, and athleticism, but is highly skilled in terms of shooting, scoring and play-making.

For Shabazz, we appreciated the play of 6’8 senior Kam Johnson.  He attacks the glass at both ends of the floor, is fast up the court in transition, and scores with some basic moves inside.  Johnson deserves a chance to play at the next level.

As a note, and not an excuse, Shabazz’s Osmar Garcia-Arajuo, a highly-regarded 6’7 sophomore, did not play.

Elevation Prep brough a lot of size to the floor, so Oldsmar was going to have to use their speed and quickness advantage to pull this one out.  It was a close contest thru the first eight minutes of the half.  At that point, the game was tied at 15-15.  Elevation then snapped off a 12-4 run to go up 27-19 with just under four minutes to go in the period.  Despite an Oldsmar timeout to get things under control, Elevation continued to dominate and finished with a double-digit lead at the break 37-24.

A couple of times in the second half, Oldsmar got their deficit down to nine and looked to have momentum.  Each time, Elevation responded.  At the eight-minute mark, Elevation led 62-44, and it seemed Oldsmar was deflated.  However, Oldsmar did outscore Elevation the rest of the way, albeit by a single point.  Elevation advanced with an 83-66 win.

We came away very impressed with the play of 6’4 senior Michael Eley for Elevation.  Not only does Eley have great elevation, he is a knock-down shooter from deep, a quick driver and above the rim finisher.  He also proved to be a solid passer and active defender off the ball.  He finished with 32 points in the contest.

Oldsmar’s 6’2 senior Ronnie Johnson led the Eagles with 14 points.  Whenever he got the chance, he took the ball hard to the basket, successfully scoring or earning a trip to the free throw line.  Johnson pushes the pace and has good lateral quickness and active hands on the defensive end.