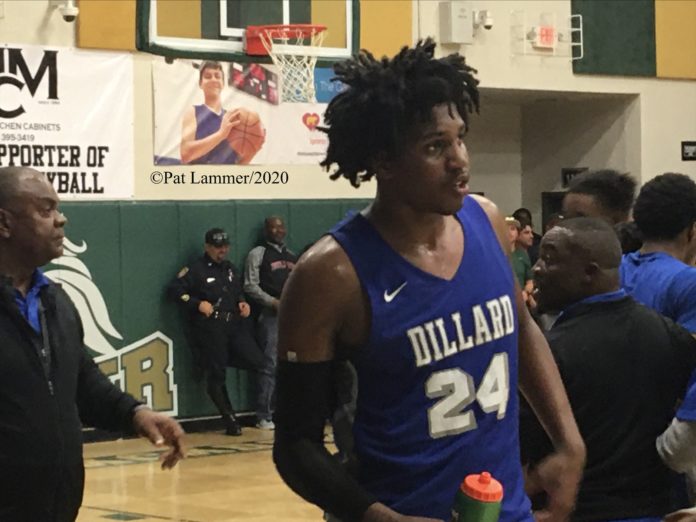 HIALEAH GARDENS — Fort Lauderdale Dillard took away Mater Academy sophomore center Malik Reneau and the Panthers’ Jalen Haynes did what he wanted in the paint en route to a 71-58 Class 6A-Region 4 championship Friday night at Mater.

NO ANSWER FOR HAYNES

The 6-foot-8 Haynes (pictured), a Division I prospect who has yet to take his college visits, poured in 28 points and grabbed 8 rebounds in the Dillard victory. Haynes shot 13 of 17 from the field and scored 18 of his 28 in the second half. He would have gone over 30 points but for a 2-for-8 night from the free-throw line. “Coach [Darryl] Burrows stated they had no answers for us inside, so we took it to them early and kept our foot on the gas,” said Haynes.

Afterward, coach Burrows talked about his talented post: “He’s gotten better. And again that was one of the things we really worked on. We knew he was good. But our goal offseason was to get him better.”

Asked where Haynes has shown the most improvement, Burrows said, “Listening to coaches. Letting us coach him through and letting us be able to kind of call the plays for him and get him involved that way.”

Dillard frustrated the 6-7 Reneau — who has early offers from Miami, Oklahoma State and FIU — from the opening tip. Burrows put Ivan Reynolds on him defensively and it paid off. Reneau picked up two early fouls and had to sit. He then got his third before the half. “We put Ivan on 5,” Burrows said. “Ivan is really quick, really nice body. So that kind of spared Jalen a little bit. You know trying to match up with him defensively.” Reneau picked up his fourth foul with 5:29 remaining in the third quarter and again had to sit. He would finish the contest 0 for 3 from the field and scored his only point on a free throw with 1:36 remaining in the game. Reynolds also had 8 rebounds.

28-2 COLUMBIA NEXT FOR DILLARD

Dillard (23-7) advances to the Boys State Basketball Tournament for the 11th time under Burrows and will meet Lake City Columbia (28-2) — 70-65 winners over Daytona Beach Mainland — at 6 p.m. Thursday in Lakeland. Burrows has been at the helm for seven state championships. Dillard lost last year in the 7A title game, 50-40, to Crestview.

Mater’s season ends 25-6. It has never made it past the regional finals in the 12-year history of the school, per the staff.