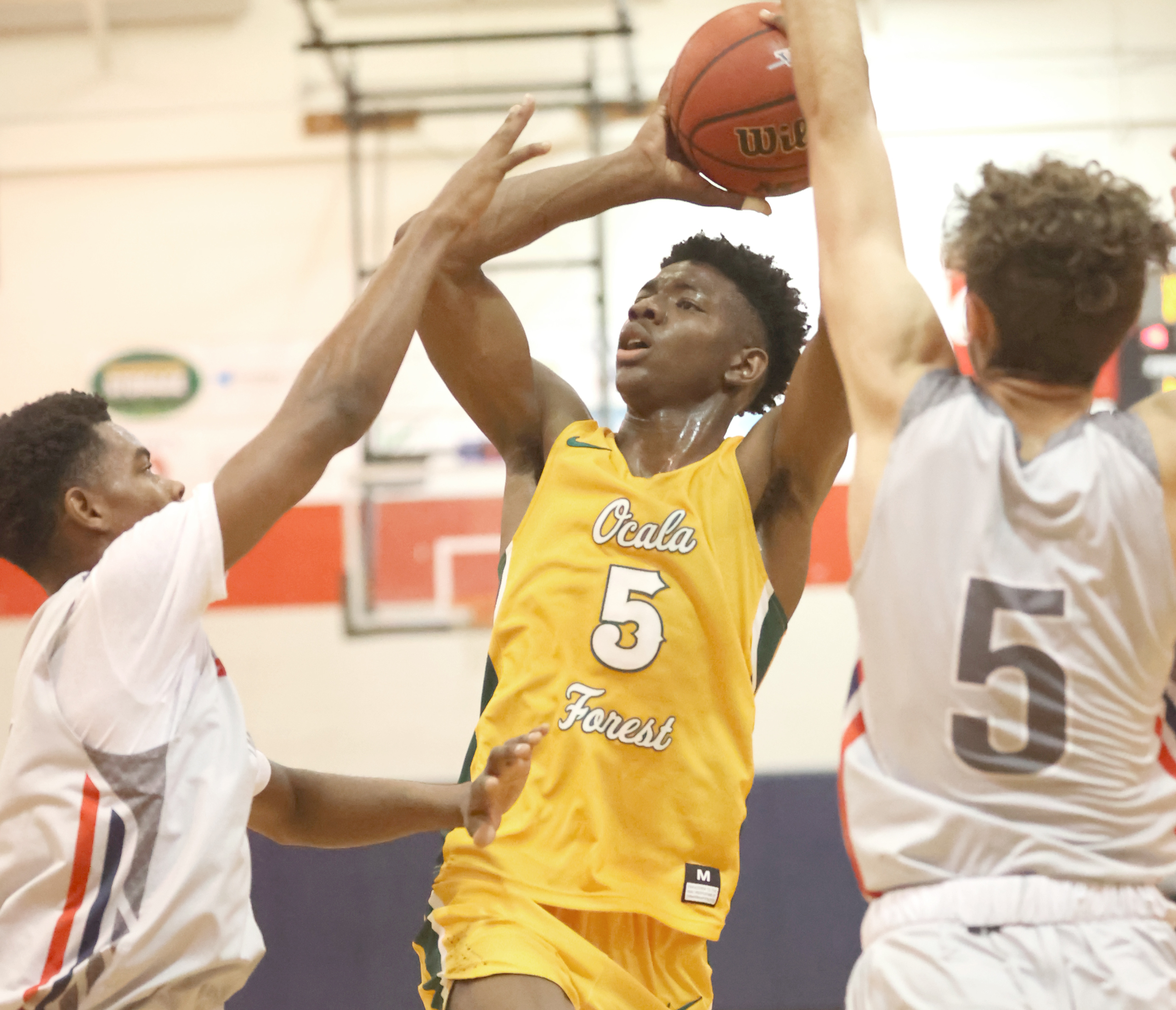 We headed out to South Lake High School to catch the District 4 tournament final in Class 6A.  This is one of the more “unique” districts as the six teams are located in five different counties.  The tournament was held at South Lake HS in Groveland, the far southwest corner of Lake County.  This meant that #1 seed Ocala Forest (Marion County) and #2 seed Daytona Beach Mainland (Volusia County) would each have to drive an hour-plus for the district tournament.

Forest got off to a quick start in the contest.  Elijah Russell connected on two free throws for the first points of the game.  After that, Brenen Lorient connected on a three in transition then later dropped in two free throws to make the score 7-0 after the first couple of minutes of play.  Mainland finally got on the board with a transition basket from Jalen Willis. Lorient answered that with a drive, but Willis connected on a pair of free throws to draw within five.  Russell scored inside for Forest then Mainland put together a mini-run with a free throw from Yamare Bell and a three from Damon Warell.  Now Mainland was back to within three at 11-8 with under three minutes left in the quarter.  Forest’s X’Zavion McCoy connected on a three to stretch the lead back to six, but a three from Nigel Cook and a free throw from Warrell brought Mainland back to within two, 14-12, at the end of the first period.

Mainland got on a roll to start the second quarter.  Ruben Walker scored on a drive, then hit a floater to give Mainland its first lead at 16-14.  The run didn’t stop there.  Warrell scored inside and then moments later dropped in a three to give Mainland a 21-14 advantage.  Josh Cuspard finally got Forest on the scoreboard with a put back, but a three from Kyle Bowman and two free throws from Ty’Rion Denison to make it a ten-point Mainland lead at 26-16.  Cuspard hit a pair of free throws for Forest but they were negated by a bucket inside from Denison.  Brandon Baxley scored inside for Forest but a three from Bowman upped the Mainland lead to eleven. The teams would exchange baskets and just before the end of the half, Baxley converted a pair of free throws for Forest to make it a nine-point game, 33-24.

Cuspard got a putback for Forest to begin the scoring in the second half.  However, Bowman of Mainland was fouled on an attempt from beyond the arc.  He made all three free throws to put the margin back to ten.  Jeremiah Russell made one of two free throws for Forest and Lorent scored inside to bring the Wildcats back to within seven, 36-29.  Willis scored inside for Mainland but Forest finished out the quarter with an 8-0 run as Elijah Russell converted a three point play, Lorient scored on the break and Calvin Danson dropped in a three.  Now with one quarter to play, it was a whole new ball-game with Mainland up only one, 38-37.

A three-point play from Cook extended Mainland’s lead but Forest was quick to respond.  A bucket inside from Elijah Russell and a driving score from Aaron Stelogeannis tied the game at 41-41.  Cook scored on a drive to give the lead back to Mainland but only briefly as Lorent tied it with a coast-to-coast drive and dunk that electrified everyone in the gym.  The game remained tied after each team hit a free throw.  It looked Forest might have the game locked up after Davison hit a three.  However, Willis of Mainland connected on one of his own to tie the game at 47-47.  Forest didn’t score on their final possession, so we got some free basketball.

Forest scored first in the extra session on two free throws from Russell.  Willis of Mainland answered with a three-point play to give the lead back to the Buccaneers.  Davison of Forest answered with a drive and the lead continued to change hands.  Mainland got three separate free throws from three different players to take a 53-51 lead with under a minute to play in the OT.  With time running down, Lorient of Forest got loose inside and tied the score at 53-53.  Mainland was unable to get a good look before the horn sounded and the game went into double-OT.

A three by Cuspard of Forest opened the second extra session.  Mainland had a chance to tie the game but Cook made two of the three free throws.  That was the opening that Forest needed.  Stelogeannins converted a pair of free throws and Lorient scored on a putback to give Forest a two-possession lead at 60-55.  Mainland would get no closer than four points the rest of the way and Forest wins the district championship 68-62.

Forest got 20 points and 11 rebounds from Lorient while Elijah Russell had a double-double as well of 12 points and 12 rebounds.  Cuspard also had double figures with 11 points.

For Mainland both Willis and Cook finished with 15 points each.

For the game, Forest out-rebounded Mainland 44-26, including 20 offensive rebounds.  However, the Wildcats turned the ball over 23 times.