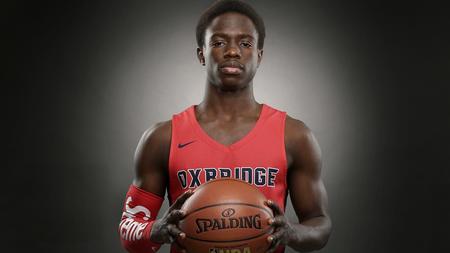 Next up on our “tour” of district finals was a trip to West Palm Beach to catch undefeated Oxbridge Academy visiting second-seed and host school Cardinal Newman in the Class 5A District final.  Oxbridge won the first meeting by double-digits but the second contest was only a six point victory.  Would Newman make another leap and give Oxbridge its first “L” of the season?

Both teams scored early on their first possession as 6’6 senior Dante Wilcox scored a jump hook over Newman’s Emmanuel Onuana, a 6’8 senior heading to Columbia University in the fall.  Onuana returned the favor over the Florida International signee on the next trip down the court.  Oxbridge would eventually gain a three point advantage of 10-7 midway thru the first period and lead by four at 15-11 heading into the second quarter.

The ensuing period was close the entire way as Oxbridge was unable to extend its lead beyond that four point margin, while Newman never drew closer than two points and rarely had a chance to tie or take the lead.  At the half, it was just a three point game with Oxbridge on top 28-25.

Newman scored quickly to start the third period but Oxbridge responded with a short run and led by five, 34-29, at the four minute mark.  Oxbridge then took control, doubling their margin to ten at 44-34 heading into the final quarter.

Newman wasn’t done.  The Crusaders opened the fourth with an 8-0 run in the first 1:45 to draw within two, 44-42, forcing an Oxbridge timeout.  However, Oxbridge was in the bonus, in the lead, and in possession of the ball.  Without a shot clock, that is a huge advantage.  Oxbridge got a three point play a few minutes later to lead by five with four minutes left.  The Crusaders didn’t fold and with 2:15 to play, were down just two at 49-47.  Each team scored a bucket over the course of the next minute.  Newman sent Oxbridge to the line with twenty seconds to play, down two at 51-49 and needing the ball back.  Oxbridge missed not one but both free throws.  Senior A.J. Cajuste made a big play for Oxbridge, snaring the offensive rebound.  He was immediately fouled and converted two free throws to make it a two possession game.  Newman drove to the basket, hoping for a bucket and/or foul, but got neither.  Cajuste got the ball and was fouled again with ten seconds left.  He again converted both foul shots, ensuring the district title for Oxbridge.  Newman was unable to get another shot to go down and Oxbridge continued its undefeated season with a 55-49 win and the district tournament title.

Oxbridge was led by Cajuste with 30 points while Wilcox added 14 points.

For Newman, Chris Kent had 11 points and Onuana finished with 10 points.