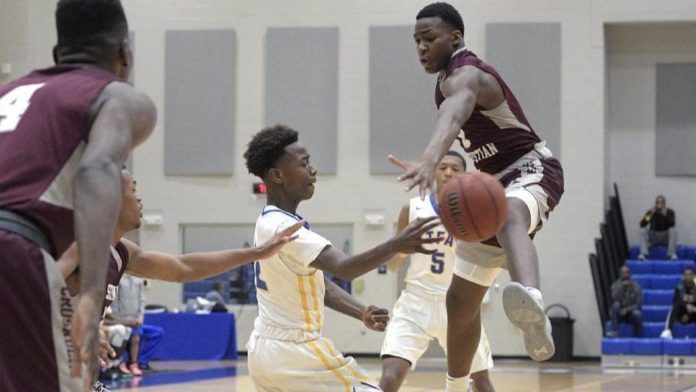 There was a smattering of championship games on Saturday and we chose to head down to St. Pete Catholic for the Class 4A District 4 title game between Tampa Prep and Seffner Christian.  Their lone meeting was back in mid-December at Seffner Christian.  The home team won by double-digits in that one but things were expected to be different on a neutral court.

The game sure didn’t start out that way.  Seffner Christian raced out to a 7-0 lead with 4:17 left in the first quarter, forcing a Tampa Prep timeout.  After the timeout, Tampa Prep seemed back in the game with four straight points.  SC was unfazed by that and reeled off nine points in a row.  In all, SC outscored TP 10-6 after that timeout to lead by a score of 17-6 at the end of the first period.

Fortunes for both teams changed rapidly in the second quarter.  Now it was Tampa Prep that seized momentum.  A 12-4 run got the Terrapins back to within three at 21-18 with just under five minutes to play.  After a Crusaders timeout, Tampa Prep stayed on its roll and seized its first lead at 22-21 with 3:30 left to play.  Seffner Christian would call another timeout after a Terrapin bucket to push the margin to three.  At the half, Tampa Prep led by two at 27-25 and the crowd felt that they had seen two separate games.

The Crusaders tied the game at 27 on the first possession of the third quarter.  Neither team got on a run in the third quarter like the first two.  Both seemed to play with a bit more caution.  Tampa Prep led by two at 31-29 midway thru the period.  Seffner Christian took back the lead at 36-35 with 1:15 left in the third and led 38-37 heading into the fourth quarter.

The Terrapins of Tampa Prep opened the final period with a 6-0 run and with 4:19 left in the contest looked in control up 47-42.  The Crusaders caught some momentum at that point and with 1:30 left to play were within one at 48-47.  At that point Isaac Ward of Tampa Prep hit two free throws to push the margin to three.  Seffner Christian got back to within two on a free throw a few seconds later but a quick transition basket by Ward pushed it to a two possession game with just over one minute to play.  On the next Crusaders possession, Cornelius Bobo was fouled and converted both free throws.  Gabriel Sharp of TP scored in transition and was fouled, but he missed the free throw, leaving the door cracked for Seffner Christian.  Seffner’s Mike Trigg put back a miss with fifteen seconds and then Tampa Prep turned the ball over with enough time remaining on the clock for a Seffner play out of the timeout.  Treig was able to work his way inside and score just before the horn sounded to tie the game at 54 and go into overtime.

Trigg scored quickly to open the overtime session but Sharp responded in kind for Tampa Prep.  The Terrapins’ Jaden Gray got a steal and score on the next Seffner possession.  One of two free throws by Sharp at the 1:14 mark gave the Terrapins a three point 59-56 lead.  Bobo drew the Crusaders back to within one when he was fouled while scoring a bucket inside.  He missed one free throw, leaving Tampa Prep in the lead.  Tampa Prep turned the ball over and Trigg was fouled on an offensive rebound attempt.  He knocked down both to give Seffner a 60-59 lead with just under a minute to go.  On the next Terrapin possession, Gray was fouled inside with 45 seconds left to play.  He made the first to tie the game at 60 but was unable to convert the second.  The Terrapins defended Seffner Christian’s last play well and the overtime session ended tied at sixty.  On to OT #2!

It took a while, but Tampa Prep got on the board first with a free throw from Jaren Phillips.  Seffner Christian turned the ball over on their next possession but were able to get a stop.  With 25 seconds left in the game, Willie Jones of Seffner Christian rose up and drained a three pointer, given the Crusaders a two point lead.  Tampa Prep got a look inside and an offensive rebound opportunity on their next possession but came away empty.  Seffner Christian grabbed the rebound and took off in transition, but turned the ball over with eleven seconds left in the game.  Tampa Christian drove hard to the basket but got neither a bucket or a foul call.  The ball went off Seffner Christian with 4.6 seconds left.  The Terrapins got off a contested three pointer but it didn’t fall and the Crusaders win a thriller in double-OT 63-61.

Seffner Christian was led by Trgig with 29 points while Jones added 22.

Tampa Prep was led by Sharp’s 18 points while Phillips tallied 14 and Gray finished with 10 points.