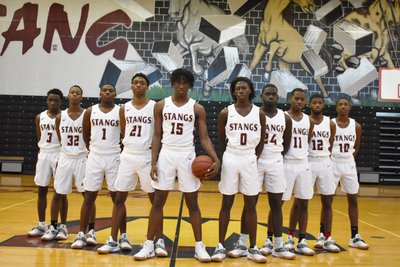 We decided to stay close to base last night and catch the Class 9A District 3 semi-finals being hosted by Wekiva in Orlando.  While only a four team district, this group has been known for knocking off the top seed over the past decade or so.

The first quarter of this contest found both teams playing at an even and efficient level.  If one team hit a three, the other did likewise on the next possession; if one team turned the ball over, it seemed that the other felt the need to do the same thing.  West Orange held a one point lead at 8-7 midway thru the period but it was Evans that led after one, 16-15.  Like we said, evenly played.

The Trojans of Evans extended their lead with a 7-0 run during the first minute of the second quarter.  Evans would push that margin to double digits at 31-20 midway thru the period and looked in complete control.  West Orange was able to get back into the contest with some timely perimeter shooting and taking advantage of a couple of Trojan turnovers.  At the end of the period, West Orange was down only five at 38-33, still very much in the contest.

West Orange scored the first bucket of the third period to get within three points, but Evans responded with another 7-0 run to push their advantage to 45-35 with 5:30 left in the quarter.  West Orange called a time out but they could do no more than keep even with the Trojans for the rest of the quarter.  With one period left to play, West Orange was down eleven at 55-44.

Evans asserted control in the fourth.  West Orange attempted to extend their defense but Evans was able to get through it and score often.  The Warriors of West Orange were not able to get the gap below double figures and Evans advanced to Friday night’s title game tilt by the score of 77-59.

Despite being the bottom seed, it was a home game for the Mustangs of Wekiva.  The Blue Darters of Apopka won both regular-season contests but this is a rivalry game and records are thrown out the window.

Like the first game of the night, the first quarter was a back-and-forth affair.  Wekiva led by a score of 7-6 midway thru the period as both teams looked to take care of the basketball and attempt good shots.  Apopka was able to swing the game momentum their way to finish up by two at 13-11 after one quarter play.

In the third period it was Wekiva’s turn to have a five point lead, 38-33, at the midway point.  Apopka tied the game at 38 with just over two minutes to play in the quarter.  Wekiva was able to collect itself and not let the deficit shake them.  Wekiva still clung to a lead heading in the final period, 42-40.

Apopka connected on consecutive three point shots early in the final period to lead 46-42 with 4:30 left to play.  They increased that advantage to seven points, 51-44, with 2:44 left in the game and looked in complete control.

That wasn’t the case

With one minute to play, Wekiva had fought its way back and was down by just two, 51-49, with a minute to play.  Michael James of Wekiva was fouled on a drive and hit one of two free throws to get to within a point.  The Mustangs then forced a Blue Darter turnover with 45 seconds to play, giving them new life.  Jayden Battle of Wekiva was fouled when attempting to score after that turnover.  He made the first but missed the second, tying the game at fifty-one.  Apopka took a time out to prepare to either win the game on a last second shot or get to overtime.  Inexplicably, the Blue Darters launched a deep three pointer with twelve seconds left and Wekiva snared the rebound.  The Mustangs rushed the ball up the court then called a timeout with seven seconds left.   After the timeout, Wekiva got about two passes off before Terence McClain found himself all but surrounded with the ball on the left wing about thirty feet from the hoop and the clock winding down.  He tossed up a prayer and the horn went off with the ball in flight.  It hit the backboard and went in, setting off a jubilant celebration by the Wekiva team and fans while Blue Darter Nation could only stand in abject silence and disappointment.  The top-ranked team in the state’s largest classification will miss the playoffs as Wekiva wins a thriller, 54-51.

James led Wekiva with 16 points, followed by McClain with 15 points.

Apopka was paced by Zach Anderson with 15 points and Keeving Etienne contributed 12 points.