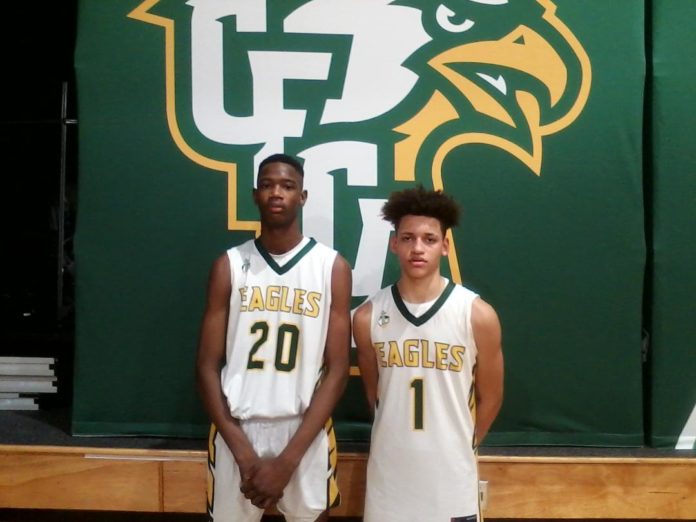 We decided to “keep it local” for the first night of the regional playoffs by heading down the road to catch Faith Christian at Central Florida Christian Academy.  Located on opposite ends of greater Orlando, both teams came in with sterling records.  However, CFCA had the much higher rating and had played a much more challenging schedule.

That was evident after the Eagles got out to a quick 6-0 run behind a pair of buckets inside from Jajuan Preaster and a transition basket from Riley Kugel.  Both teams were cold from beyond the arc, and with half of the first period gone by, the score was 6-0 in CFCA’s favor.  The Lions of Faith Christian finally got on the board with a fast break bucket from David Hernandez.  From that point on the teams played evenly with 11-6 being the score after one quarter of play.

CFCA opened the first quarter hot once again, this time unleashing an 11-0 run on the Lions.  Five different Eagles would score those points, pushing the lead to 22-6 near the midway point of the quarter.  Josiah Sarasty finally got Faith on the board with a pair of free throws.  From there, Faith would gain momentum, outscoring CFCA 13-8 over the rest of the period.  Sarasty had all but two of the Lions’ thirteen second quarter points.  At the break, CFCA held an eleven point, 30-19 advantage.

An early transition basket from Nas Williams of Faith got the Lions to within nine, but that didn’t last long.  Five quick points forced a Faith timeout with the score 35-21 and 5:26 left to play in the third.  CFCA slowly but surely spread its margin over the remainder of the quarter, leading by a score of 49-31 going into the final period of play.

Extended defensive pressure was unable to yield the turnovers and scores that Faith needed to get back into the contest.  With just under four minutes left, CFCA still led by double-digits, 55-39.  One minute later, Faith waived the white flag and put in their bench.  CFCA did the same thing, but the Eagles still finished the game with an 11-2 run to win comfortably, 66-41.

CFCA put three players in double-figures as Nick Silva led the way with 15 points and both Kugel and Preaster tallied 14 points each.

For Faith, Sarasty led the way with a game-high 16 points while Hernandez added 12 points.