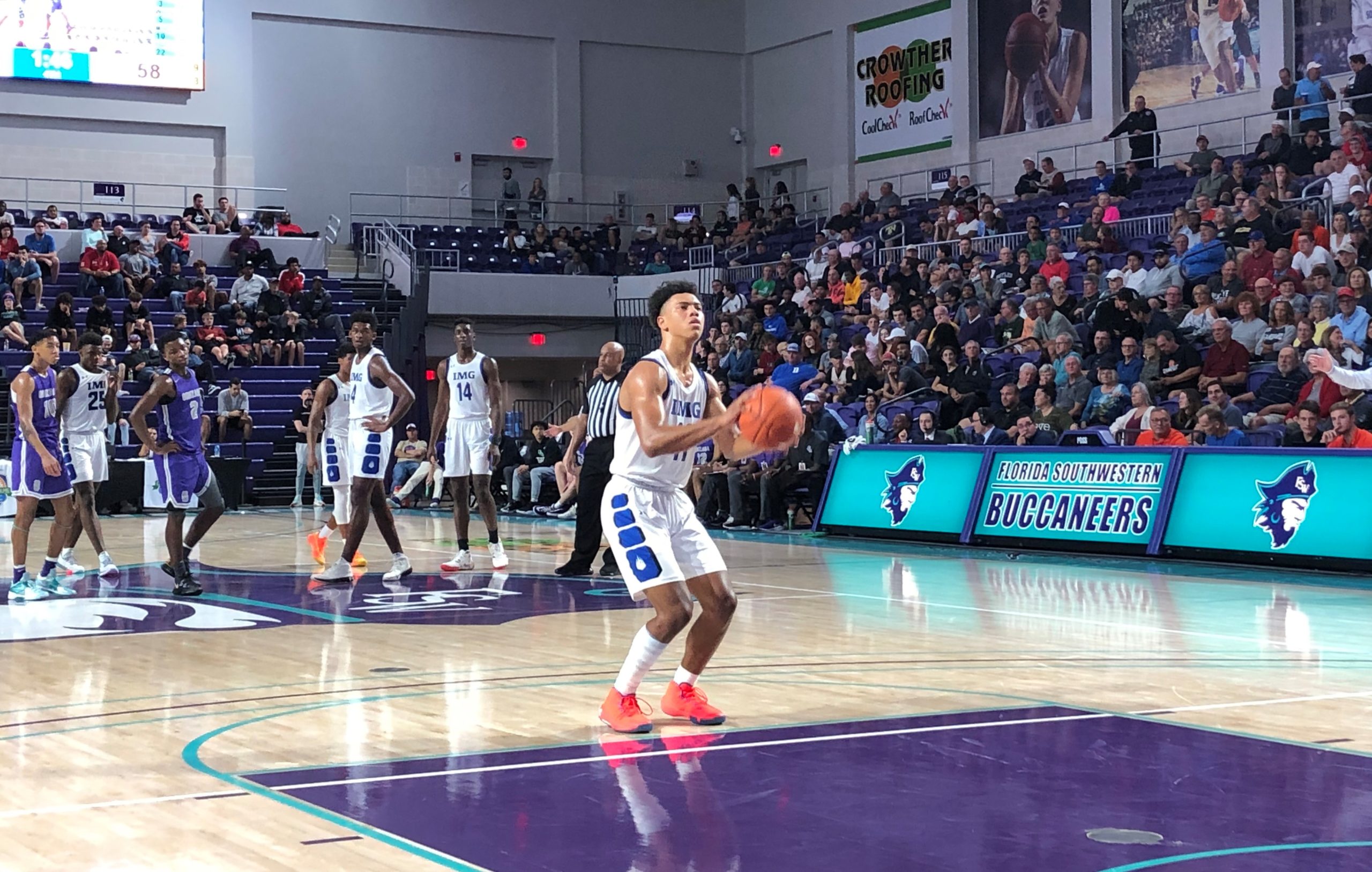 Both teams have been impressive so far at the City of Palms.  IMG had no problem its first two games and Gonzaga, given a bye into the quarter-finals, was thoroughly impressive on Friday night.

Jaden Springer (pictured) got the action started with mid-range jumper for IMG.  Gonzaga responded quickly with a driving score from Chuck Harris.  After a Gonzaga free throw, Springer gave the lead back to IMG with another score.  Four points from Gonzaga gave the lead back to the Purple Eagles at 7-4 with just over five minutes to play.  Once again, IMG re-took the lead, but Gonzaga closed out the quarter on a 9-2 run highlighted by a three point play from Terrance Williams, to give Gonzaga a “surprising” six point lead, 16-10, after one period of play.

Gonzaga upped its lead to seven early in the second, but IMG pulled back to within three with a 6-2 spurt to make the score 19-16 with 5:19 to play in the quarter.  Right back came the Purple Eagles with two free throws and bucket inside to push their lead back to seven.  A three from Matt Murrell of IMG and a bucket inside from Brandon Huntley-Hatfield had the Ascenders back to within a bucket at 23-21.  Gonzaga knocked down a three moments later, but IMG was undaunted and a three from Hatfield and two free throws from Springer tied the score at 26-26.  Williams of Gonzaga was fouled on a drive just before the half-time horn and made one of two free throws to give Gonzaga a one-point, 26-27 lead.

A mid-range jumper from Jarace Walker gave IMG their first lead in a while to open the third, but six straight points from Gonzaga, four from Williams, gave the Purple Eagles a 33-28 lead with six minutes left in the quarter.  Springer hit a three for IMG to cut the margin to two, but the Purple Eagles seemed to have an answer every time IMG got close.  On four occasions, IMG got within one possession of tying or taking the lead.  Each time they were repelled.  With the score 42-40, Harris of Gonzaga scored on a drive and Williams put back a miss to make it a six point game.  Two free throws from Springer before the end of the quarter made the score 46-42 with one period to play and the crowd was enthralled with the possibility of witnessing a big upset.

IMG finally broke through to start the final stanza, going on a 10-4 run to grab a 52-50 lead with 5:35 to play.  Harris stroked a three for Gonzaga to re-take the lead, but only for a moment.  A bucket inside from Walker and a three from Hatfield and one from Moussa Diabate gave IMG a seven point 60-53 advantage.  Now it was Gonzaga’s turn to climb uphill.  They got a bucket on their next possession to cut the margin to five, but three successive vicious slams in transition from IMG pretty much shut the door, giving IMG a ten point lead, 66-56, with 2:07 to play.  Now with breathing room, IMG would go on to win comfortably by the score of 76-67.

Williams of Gonzaga led all scorers with 29 points while Harris finished with 16 points.