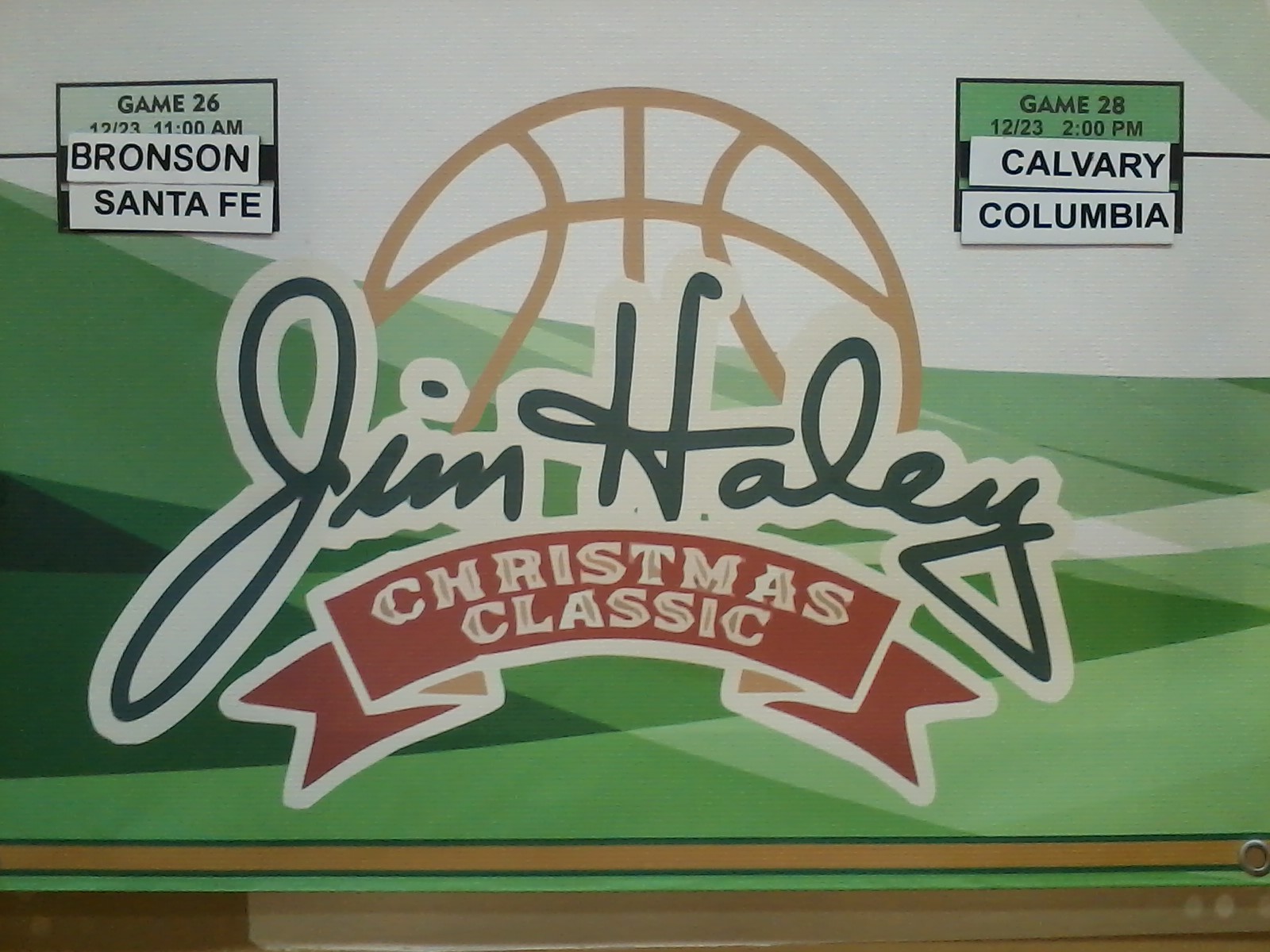 We took in the final day of the inaugural Jim Haley Christmas Classic at Trinity Catholic in Ocala yesterday.  Honoring the famed Ocala Vanguard coach and founder of the Kingdom of the Sun Classic which became the model for all other holiday basketball tournaments, the Jim Haley Classic is hopefully here to stay.  You have to give a lot of praise to Trinity Catholic Head Coach Carlos Villalobos and his group of volunteer organizers in getting a first-year event off the ground as well as they did in a time of uncertainty due to the new COVID Omnicron breakout.  The event was impacted by that, losing a team just before the start the event and having to adjust on the fly.

Bronson was a late addition to the event and the Class 1A school did its best to compete against “the big boys”.  Santa Fe was a state finalist last year and still has plenty of fire power returning, most notably juniors Dontrell Jenkins and Mason Brown.

Not surprisingly, Santa Fe got up early and led 17-9 after the first four minutes of action.  Give Bronson credit as Avery Montero and company didn’t let the Raiders get too far away.  After one quarter, the score was 21-13 in favor of Santa Fe and Bronson was giving the Raiders all they wanted.

Bronson’s success was short-lived as Santa Fe stepped on the gas in the second period.  The Eagles were held to just four points in the period while the Raiders got out in transition and knocked down open threes to put up 24 points in eight minutes.  At the break, Santa Fe was up 45-17.

Things didn’t get better for Bronson in the third period.  When Santa Fe’s Braylon Guyden hit a three to make the score 58-22 with three minutes remaining in the quarter, the running clock kicked in.  Santa Fe didn’t back off and ultimately won by the score of 84-28.

Brown led Santa Fe with 18 points while Jenkins had 16 points and Guyden finished with 13 points.

Montero and teammate Jeythian Merced each had 10 points for Bronson.

Bartow is quite young and we were eager to see how far they had progressed since losing in a big way to Olympia at Thanksgiving.  SLAM is new to us so we were intrigued as to what we might see from them.

The opening minutes of the first quarter were fast-paced and found the game tied at 10-10 thru the first four minutes.  Bartow was able to go up three points, 18-15 by the time the horn sounded to end the period.  The Yellow Jackets would extend their margin to six at 25-19 midway thru the second quarter. SLAM was able to shave only one point from that deficit to go into the half down 28-23.

SLAM started the third quarter off with a 5-0 run in the first minute to tie the game at 27-27.  Bartow was able to respond and get their lead back to five at 37-32 with three minutes left to play in the period.  That margin didn’t last and SLAM was within one, 39-38 going into the fourth.

SLAM got on a run midway thru the final period.  They took the lead at 44-42 with four minutes remaining.  At one point, they led by ten, 52-42, after a dunk in transition by Ramone Seals.  Bartow fought back but couldn’t get over the hill.  SLAM pulled what some would call an upset, 53-46.

SLAM was led by Matthew Selmon with 14 points while Seals had 13 points and Idell Walton contributed 12 points.

Bartow got 11 points each from Jaiden Wynn and Kjei Parker.

While there may be a stark contrast in the two teams physically, both like to play a fast-paced brand of basketball and each has been very successful over the past three or so seasons.

It was Columbia that got out of the gate first, leading 10-5 after the first four-and-a-half minutes of play.  However, Calvary closed out the quarter with an 8-2 run to make the score 13-12 in its favor.  Columbia tied the game at 18-18 with 4:45 to play until the break.  The pace picked up dramatically from there and when the dust had settled, Calvary was up by six, 34-28.

Calvary was able to slowly extend their lead throughout the third period.  They led by ten, 52-42, going into the fourth quarter.  Columbia made a run and with four minutes left were well within striking distance, 58-52.  However, they would not get any closer.  Calvary would hold on to an 67-60 victory.

Central Pointe, or CPCA, is member of the Sunshine Independent Athletic Association (SIAA) and has been nationally ranked earlier this season.  Berkeley is solid, but with junior guard George Kimball only playing a few minutes due a gimpy ankle, it would be a big hill to climb.

CPCA jumped out right away, leading 11-4 after just three minutes of action.  The fast pace and size of CPCA made it really difficult for any Berkeley Prep player to score other than senior C.J. Hawkins, a Stanford football recruit.  At the half, CFCA was up 40-18.

CPCA is used to scoring quickly as the SIAA plays with a shot clock.  Eventually, Berkeley Prep was overwhelmed and the running clock kicked in during the third quarter at 65-27.  CFCA would go on to win by the score of 74-32.

CPCA was led by Mycol Sanchez with 14 points.

Berkeley Prep was led by Hawkins who had 27 of the team’s 32 points.

The host school was looking to go 3-1 in their own tournament.  It looked like they would have a good chance of doing so as Providence came in with only six players due to illness and injury.

Trinity led 8-4 after the first four minutes but Providence then ripped off an 8-3 run to take the lead with one minute left.  TC scored the last basket of the quarter to take a one point lead.  The Celtics extended their lead in the second quarter, getting some hot three-point shooting from L.J. Pugh to go up 21-15 midway thru the second period.  Providence would keep pace and at the break was down only five, 32-27.

Trinity would maintain its lead in the third period but Providence wasn’t going away nor making it easy.  By the time the third quarter ended, Providence was within three, 40-37.  The Stallions quickly tied the contest at 40-40 in the fourth quarter and led 43-42 with four minutes left to play.  Trinity regrouped and hit a three to take a 45-43 lead.  After a Providence miscue, Trinity hit a pair of free throws to make it a four-point game with thirty seconds left.  Providence got to within one on a free throw with seventeen seconds left but was unable to get another scoring opportunity.  Trinity would hold on for a 47-44 win.

Trinity was led by Elijah Russell with 15 points while Pugh finished with 12 points and Ashton Lovette contributed 11 points.

Providence got 15 points from Chris Arias.

The third-place game featured Doral out of Miami-Dade and Apopka from the Orlando area.  Apopka fell to a three-point onslaught from Mater Lakes in the semis while Doral dropped one to Windermere.  Both teams were looking for some redemption in this contest.

Both teams set a good pace and after four minutes Apopka led 11-7.  In less than a minute, Doral took a 13-11 lead.  However, by the end of the period, it was Apopka that was up 19-16.  The Blue Darters were able to keep an advantage throughout the second quarter.  They led by just two midway thru at 22-20 but by the time the halftime horn sounded, the lead had grown to seven, 32-25.

It looked like Apopka was going to have an easy time finishing off Doral as they had a nine point, 50-41 lead going into the final period.  That’s when Doral junior Gabe Hernandez detonated.  He quickly got Doral back into the game, and with 5:39 to play the game was tied at 50-50.  With one minute remaining, Apopka led 59-57.  With forty-five seconds left, Hernandez drained a three to give the Firebirds a 60-59 lead.  Apopka worked the ball around hoping for a good look but eventually called a timeout to set up a play.  It worked as Phillip Tepper knocked down a three to give Apopka a 62-60 lead with just five seconds left.  Doral was unable to get off a good shot and Apopka took third place in the event.

Apopka got 15 points each from Daren Leath and K.J. Robinson while Brandon Johnson added 11 points.

COVID struck again as this game had to be cancelled as a player from Windermere tested positive and contact tracing forced the Wolverines to withdraw.  Mater Lakes was awarded the tournament trophy earlier in the day.