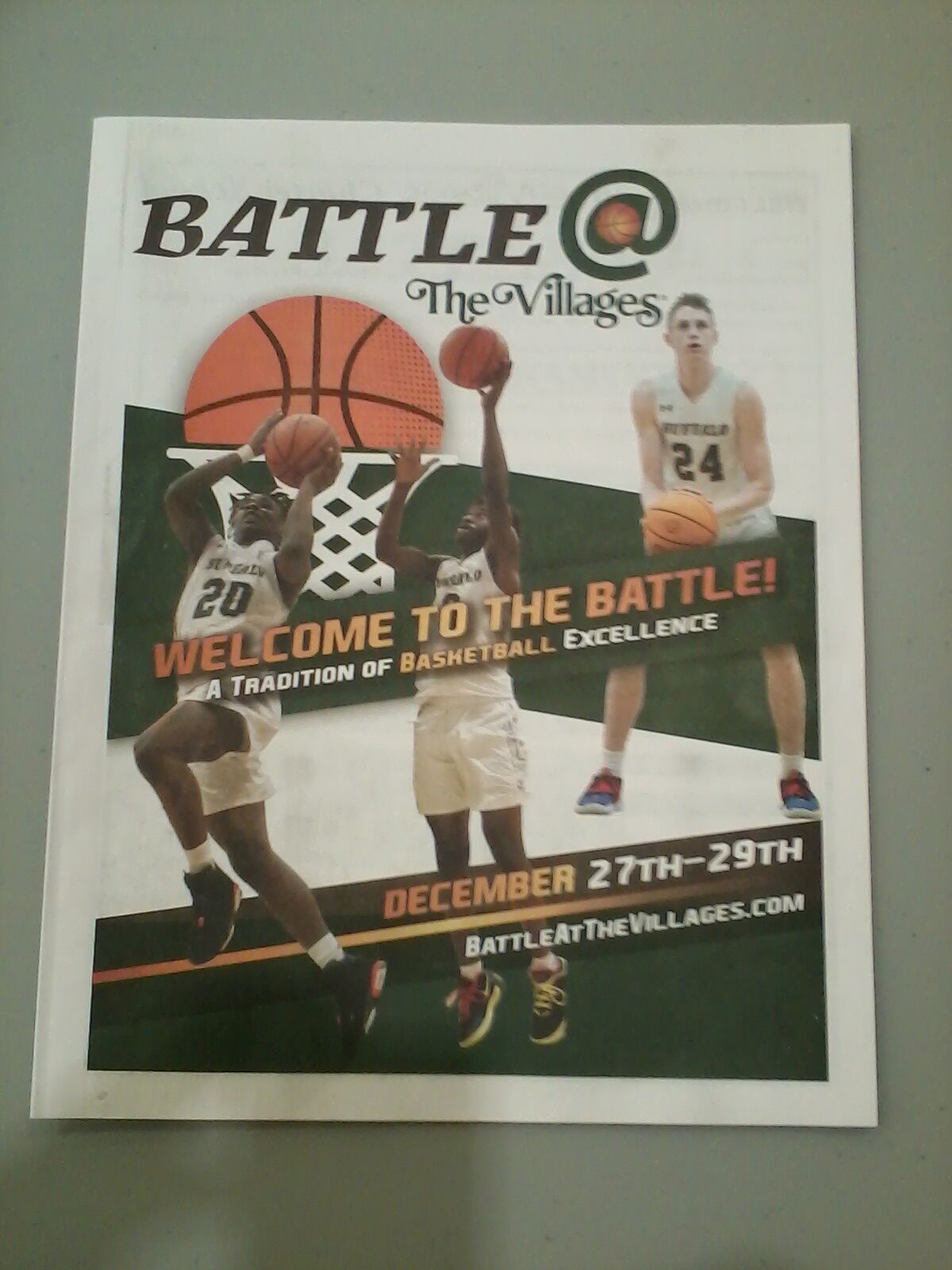 One of the better post-Christmas events in Florida, The Battle at The Villages was not immune to the effects of COVD.  Two perennial state powers, Bartow and Fort Lauderdale Calvary Christian, were forced to withdraw after positive tests within each program.  So now what was an eight-team tournament has become six and like many other events around the state, adaptability has become the main ability to pulling a successful event.

The Colonels of Covington Catholic are fresh off winning the Kingdom of the Bluegrass tournament tile just before Christmas.  They are also no stranger to The Battle, having won in 2019.  The get a lot out of the inside/out combo of 6’8 senior Mitchell Rylee and 5’11 junior Evan Ipsaro.  Roswell has reached the state playoffs in Georgia’s most competitive classification each of the past five years, reaching the Elite Eight in 2019.  The Hornets return three starters from last year’s playoff team and 6’3 junior Jase McCullough was named all-region as a sophomore last season.

It was a well-played and fast-paced first quarter.  Roswell was the first to grab a lead but Covington tied it quickly.  With 3:30 left in the period, the game was tied at 7-7.  Neither team could gain more than a two-point advantage at any time and the first quarter ended in a 15-15 tie.

Covington scored the first five points to grab an early lead in the second quarter.  Roswell would keep pace for a bit but then Ipsaro of Covington went on a scoring binge rarely seen at the high school level.  He went off for 21 points in the quarter, including a trio of threes to go along with some mid-range jumpers off the dribble to complement some drives he finished in traffic.  On the other end, Roswell was having turnover issues and struggled to make shots when they did get one off.  What was a tied game to start the quarter became a 41-28 Covington Catholic lead at the break.

Things didn’t get any better for Roswell after halftime.  Covington extended its lead to nineteen, 52-33 with four minutes remaining in the third.  It looked like a running clock could come into play as the Colonels built their lead into the mid-twenties but give Roswell a ton of credit for not throwing in the towel.  By the end of the third quarter, the Hornets got the margin below twenty at 64-45.

Roswell could not get any closer.  Covington pushed their margin back into the twenties by midway thru the final period.  With just a couple of minutes left to play, Covington put in their bench and Roswell made enough of a run to get the final margin to nineteen, 75-56.

Covington got 38 points from Ipsoro.  He had his opportunities for a forty-burger but missed on his final two shots before being taken out.  Rylee added 14 points and Chandler Starks contributed 11 points.

The Warriors of OCP are coming off a 1-2 showing at the City of Palms Classic, and that is still a solid accomplishment.  They will be looking for some redemption here but it will be no easy feat.  While Concord is returning only one starter from last year’s team but will boast four players 6’6 or taller.  The Eagles of Concord are led by underclassmen, especially 6’5 junior Noah Van Bibber and 6’9 junior Kany Tchanda. OCP will counter with a pair of seniors, 6’7 Ven-Allen Lubin and 6’5 A.J. Brown, and look to get contributions from 6’9 junior Jayden Hastings and a young backcourt that is gaining a baptism under fire early in the season.

OCP found themselves down early after a pair of threes from Concord to start the game.  OCP finally got on the board with a free throw from Lubin.  The Warriors closed the gap to two, 8-6, midway thru the first quarter.  OCP rallied to tied the score at 13-13 with two minutes left but when the period came to a close, Concord led by one, 16-15.

The Warriors started the second quarter with a 7-0 run to grab a lead but by the midway point of the period their lead was down to just three at 22-19.  Concord tied the game at 22-22 as OCP went through a long dry spell.  The Warriors finally broke their drought and by the time the half-time horn sounded. OCP was up three at 25-22.

OCP maintained their lead in the third quarter and led by four at the four minute mark, 35-31.  From their, the Warriors ripped off six straight points to lead by ten at 41-31 with 1:15 to play in the period.  Concord didn’t let them get any further away and at the end of the third, the margin was just nine at 43-34.

The first part of the fourth period belonged to Concord Academy.  The tied the game at 47-47 with five minutes left to play and it looked like OCP was running on fumes.  The Warriors were able to keep the lead by a possession or two until late in the quarter when they went on a short spurt to pull ahead by six and ultimately win the contest by the score of 70-62.

OCP was led by Brown with 27 points while Lubin finished with 20 points.  Ameer Ramadan contributed 11 points.

Lincoln Park is a charter school that lies outside of Pittsburgh.  The roster is young with only two seniors but the program’s history of success give the players a sense of confidence.  The team is perimeter-oriented with no player taller than 6’5.  The Villages has always been competitive in their own tournament.

Lincoln Park got out of the gate quickly, using the power of the three to lead 14-8 with 3:30 left in the first period.  The Villages drew closer to end the quarter down just four at 24-20.

The host Buffalo worked hard and tied the score at 26-26 with 5:30 left in the second quarter.  At that point, Lincoln Park ripped off a 9-0 run in less than a minute of playing time, forcing a timeout by The Villages.  The time out helped and The Villages closed the gap to 41-38 at the half.

Lincoln Park maintained control in the third quarter.  The margin was just six, 54-48, with 3:30 left in the period, when Lincoln Park exploded, finishing the quarter with a 15-5 run to take a 69-53 lead into the final period.

The Villages made a valiant run in the final period, getting the margin down to nine at 79-70 with just under three minutes to play.  However, that is as close as the Buffalo would get.  Lincoln Park finished with a 10-4 run to win going away 89-74.

The Villages got 30 points and 13 rebounds from Sam Walters while Quez Oliver added 14 points.