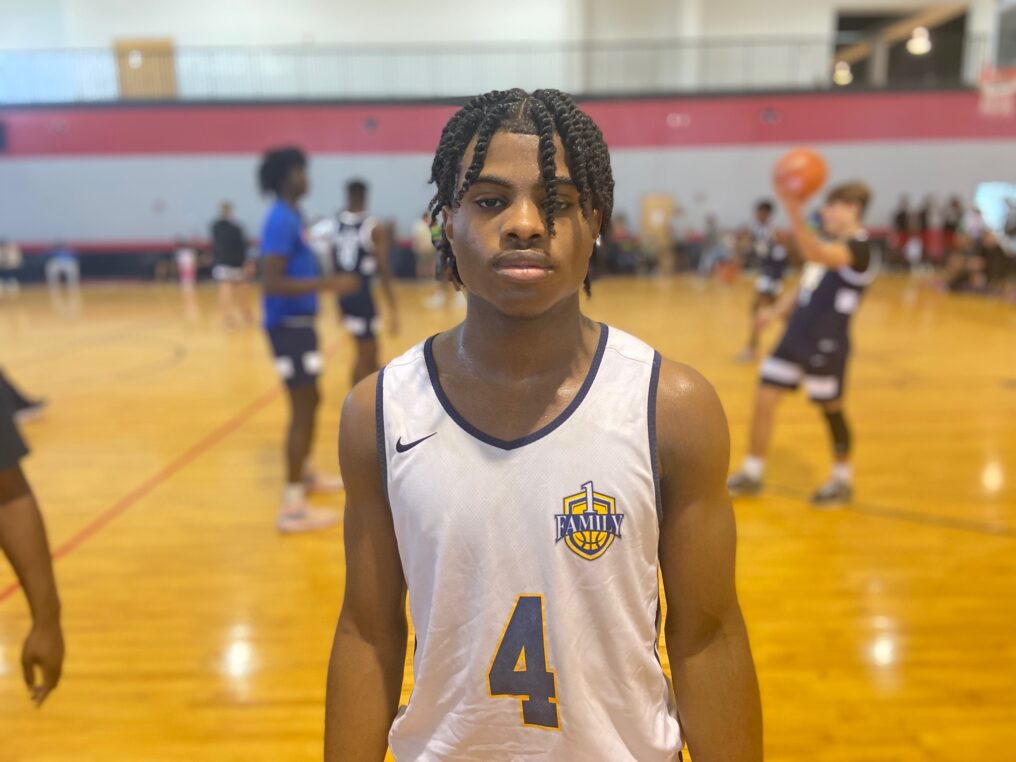 Sam Walters, Florida Rebels 17U: The 6’8 forward from The Villages wasn’t a standout on the offensive end in the game we watched vs. Team Breakdown.  However, what was impressive was his commitment on the defensive end as time and again various opponents attempted to take him off the dribble only to have Walters “wall up” and stand his ground.  Though usually reliable from the perimeter, Walters’ outside shot wasn’t falling but made up for it by getting down the floor swiftly in transition, beating the defense back for easy buckets.  Though a bit slight of frame, Walters doesn’t shy away from playing physically at either end of the floor and battles successfully for boards and blocks.

Jaylen Smith, 1 Family 17U: An athletic and strong 5’11 point guard out of Orlando Edgewater, Smith is difficult to contain.  He gets excellent elevation on his jump shot which is accurate out to the arc and if the defense attempts to take that away, Smith has the ability to blow by them and complete plays at the basket in a crowd.  It is not a rare occasion for Smith to be on the receiving end of lob passes to the rim, which he had no issue in dunking violently.  While maybe not a “true” point guard in that he is pass-first, Smith is alert to get the ball to open teammates should he be stymied by the defense.  The same strength and quickness that makes him tough to defend makes him a potent defender, especially when guarding the basketball.

Kervin Knaggs, SE Elite 17U: Knaggs, a 6’1 guard out of Auburndale, had one of his better performances in front of us this past weekend.  He was most effective using his sturdy frame to body past defenders to get to the basket and score.  Knaggs has the ability to absorb contact and still put the ball in the hole.  His had some success with his perimeter jumper this weekend, which makes him all the more effective.  Knaggs is arguably more effective as a team’s primary ball-handler but he has proven that he can be a playmaker regardless of how he is used in the backcourt.

Jasai Miles, Team Breakdown 17U: A 6’5 wing from Miami Country Day, Miles is a solid athlete, an active defender and a streaky but dangerous shooter from deep. He has the frame and ball-handling ability to attack defenders and get to the basket or the free throw line.  However, Miles will sometimes settle for the perimeter jumper.  When that shot is dropping, he can go on unparalleled scoring binges.  Miles has a nose for the ball on the offensive glass it gets many easy baskets that way.  He also puts in the effort on the defensive end, using quick feet and a strong frame to keep opponents away from the basket.

Nazir Griffin, Showtime Ballers 17U: A 6’2 guard from Bethel, Virginia (the home of Allen Iverson), Griffin impressed with some explosive athleticism Saturday.  Playing bigger than his size, he finishes well above the rim over taller defenders.  Griffin gets the ball to the basket quickly and looks to challenge anybody to try and stop him.  Consistently in attack mode, he commands a lot of defensive attention.  Because of his physical gifts, he rebounds the ball well for his size and position.

Daniel MacGregor, Florida Rebels 16U: A 6’0 sophomore from Clearwater Calvary Christian, we’ve seen MacGregor in a variety of setting since the end of the past high school season.  He was dynamic and dominant at the Spring Live Showcase but appeared a half-step slow in the first EYBL session.  MacGregor seems to have gotten his legs under him and was quite effective this weekend.  He took good care of the basketball, made the right reads on offense, and found success in attacking the basket.  Defensively he seemed much more engaged as he generated a fair share of deflections, tips, and a few outright steals.

George Kimball, Team Breakdown 17U: A 6’1 guard out of Berkeley Prep in Tampa, Kimball brings a much-needed point guard presence to Team Breakdown.  He is very quick and fast with the ball and continuously pushes the pace.  Kimball gets into the lane frequently and will either complete the play himself or get the ball to open teammates with better scoring opportunities.  He doesn’t unleash his perimeter shot often but when he does it connects at a respectable rate.  Kimball makes the opposing ball-handler work very hard when guarding the basketball.

Dewayne Brown, Florida Rebels 15U: A 6’8 freshman out of Hoover, Alabama, Brown has big body and is physically overwhelming on the 15U level.  He understands how to use his frame to carve out space and score inside.  Brown shows a deft touch with either hand by the basket, owns his rebounding area, and protects the rim on defense.  His athleticism will improve as his body matures and firms up.  Once that happens, he could become a dominating post player at both ends of the court.

Jalen Lewis, Florida Rebels 15U: A 6’6 freshman from Tampa Blake, Lewis is fast becoming one of our favorite players to watch in the Class of 2025.  Long and versatile, Lewis runs the floor, has good ball-handling and passing skills, his perimeter shot continues to improve.  An active defender and rebounder, Lewis covers a lot of ground in a short amount of time on the defensive and has shown he can guard multiple positions. He reminds a great deal of 2020 Mr. Basketball Isaiah Adams at the same stage of development.