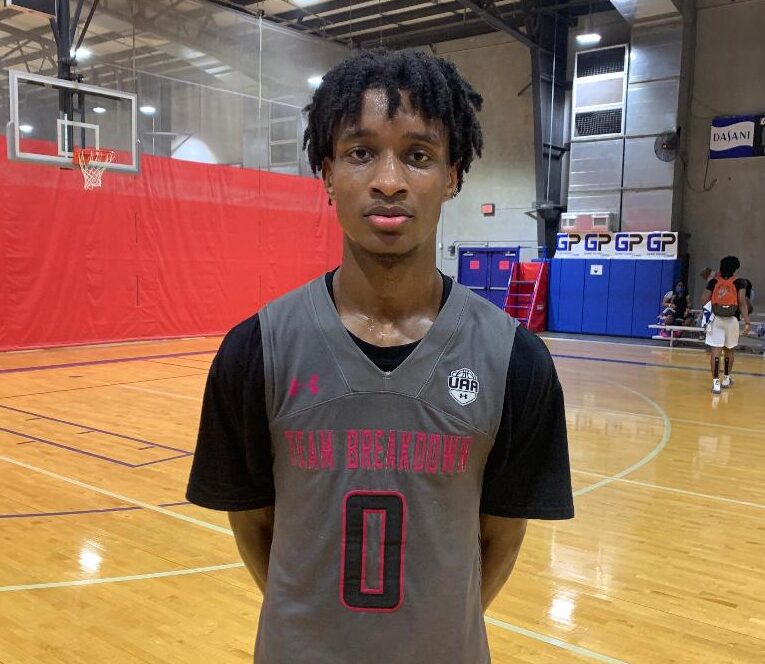 Kris Parker, Team Breakdown 17U: A 6’6 wing out of Crossroad Academy in Quincy just outside of Tallahassee, Parker is a solid ball-handler and scorer inside the arc.  While his shot is streaky from three-point range, he makes enough of them that the defense must give him some respect.  He has good change of direction moves off the dribble and finishes creatively in a crowd.  Parker is also a respectable passer and is alert to find open teammates should the defense take away his drive.  Defensively, he uses his quickness and length to disrupt passing lanes and challenge shots.

Isaac Celiscar, 1 Family 17U: A 6’6 sophomore out of Winter Haven, Celiscar is playing up a level and excelling.  A very good athlete, Celiscar is seemingly always in the action when it comes to rebounds and pursuing 50/50 balls and he comes up with a majority of both.  Celiscar scores well in transition and when driving to the basket.  He has a quick first step to get by defenders and excellent body control in the air when challenged inside.  An effective passer, Celiscar doesn’t hold onto the ball long; he is quick to move the ball to teammates and then move into open spots to receive a return pass and take a quality shot.  An active rebounder at both ends, Celiscar also exhibits a high level of defensive versatility.

Isaac Tavares, SE Elite 17U: A 6’3 guard from North Florida Educational Institute in Jacksonville, Tavares excels at converting transition opportunities and drives to the basket.  Tavares routinely grabs rebounds at the defensive end, beats the defense down the floor with the ball, and finds creative ways to score.  He finishes well in a crowd at the basket and earns many three-point play opportunities.  Tavares rarely unleashes a perimeter shot thanks to his ability to score off the dribble, but when he does, the shot goes down at a reasonable rate.  An aggressive and harassing on-ball defender, he often forces opponents into mistakes and is quick to take advantage by turning loose balls or outright steals into scores.

Isaiah Brown, 1 Family 16U: A 6’3 sophomore from Orlando Christian Prep, Brown has an abundance of scoring tools.  The lefty has a reliable stroke out to the arc, hits floaters over taller defenders in the lane, and is a reliable finisher with either hand when getting all the way to the rim.  He impressed a number of times this weekend with his ability to contort his body to get off a shot inside while also having enough concentration and touch to give the shot a good chance of going down.  An active rebounder at both ends and an alert defender, Brown is rapidly becoming a no-brainer D-I prospect.

Chris Mubiru, Showtime Ballers 17U: A 6’5 wing out of West Oaks Academy in Orlando, Mubiru brings a lot of versatility to the court.  He handles the ball well, makes good decisions on the move, sees the floor and gets the ball to the right player at the right time in the right spot.  Mubiru has a reliable perimeter shot but also the strength and quick first step to get by defenders and put interior defenders on a poster.  An active offensive rebounder, Mubiru also has the ability to “grab and go” with a missed shot on defense.  We saw him defend a variety of positions this past weekend and he fared well.

Jamier Jones, Florida Rebels 15U: A 6’5 freshman out from Sarasota Riverview, basketball aficionados will be hearing a lot about Jones for the next few years.  No pun intended, but it is Jones’ athleticism that leaps out at you.  He is explosive in the best of ways and assaults the rim in the most violent manner.  Whether in transition or lobs at the rim, defenders tend to get a good look at the soles of Jones’ basketball shoes.  Yes, we’d like to get a better feel for his ability to shoot perimeter shots or attack defenders off the dribble, but that will come in time.  From what we have seen, he has good form and mechanics on his shot.  Jones is also an unselfish passer with good court vision. At one point in a game on Saturday, he got frustrated with a teammate for attempting to pass the ball off the backboard for Jones to sky and slam, as Jones really wanted the assist.  From this perspective, he seems a bit bored at the 15U level and should probably be challenged at a higher level to get the best out of him.

Mason Sword, Loyalty United 17U: A 6’4 “bull” out of St. Joseph Academy in St. Augustine, Sword is a strong lefty with lots of athleticism.  While he did make a couple of jumpers in the game we watched, Sword was most effective either driving the basketball to the rim, crashing the offensive glass, or beating the defense down the court in transition.  His motor revs high on every play and Sword simply outworks bigger opponents.  He relishes the opportunity to play physically on the defensive end, knowing that most opponents will not be able to hold up.

Elijah Elliott, Florida Rebels 16U: A 6’4 sophomore from Orlando Oak Ridge, Elliott has proven he can play either guard spot and be productive.  He is a good ball-handler and distributor when in that role.  Elliott uses long strides to get to the rim and is able to slither between or around defenders to get the ball up and into the basket.  Elliott is also very effective in transition, whether it be getting the ball ahead to an open teammate for an easy shot attempt or on the receiving end of a pass to score.  Defensively he is active and is quick to double-team and get back into the passing lanes.

Jizzle James, Florida Rebels 17U: The 6’2 guard from Orlando Olympia carried over his high level of play from both EYBL sessions to The Battle.  He scored from all three levels this weekend and was key in helping his squad get past a solid Team Breakdown by just two points on Saturday afternoon.  He’s selective when it comes to launching three-point shots, preferring to use his strength to create space for his deadly mid-range pull-up or to get all the way to the basket to score.  James may not be a creative distributor but he is quick to advance the ball in transition and moves the ball quickly to open teammates in half-court sets.  He is solid on the defensive end, uses his body without fouling, and does a good job of staying between opposing ball-handlers and the basket.