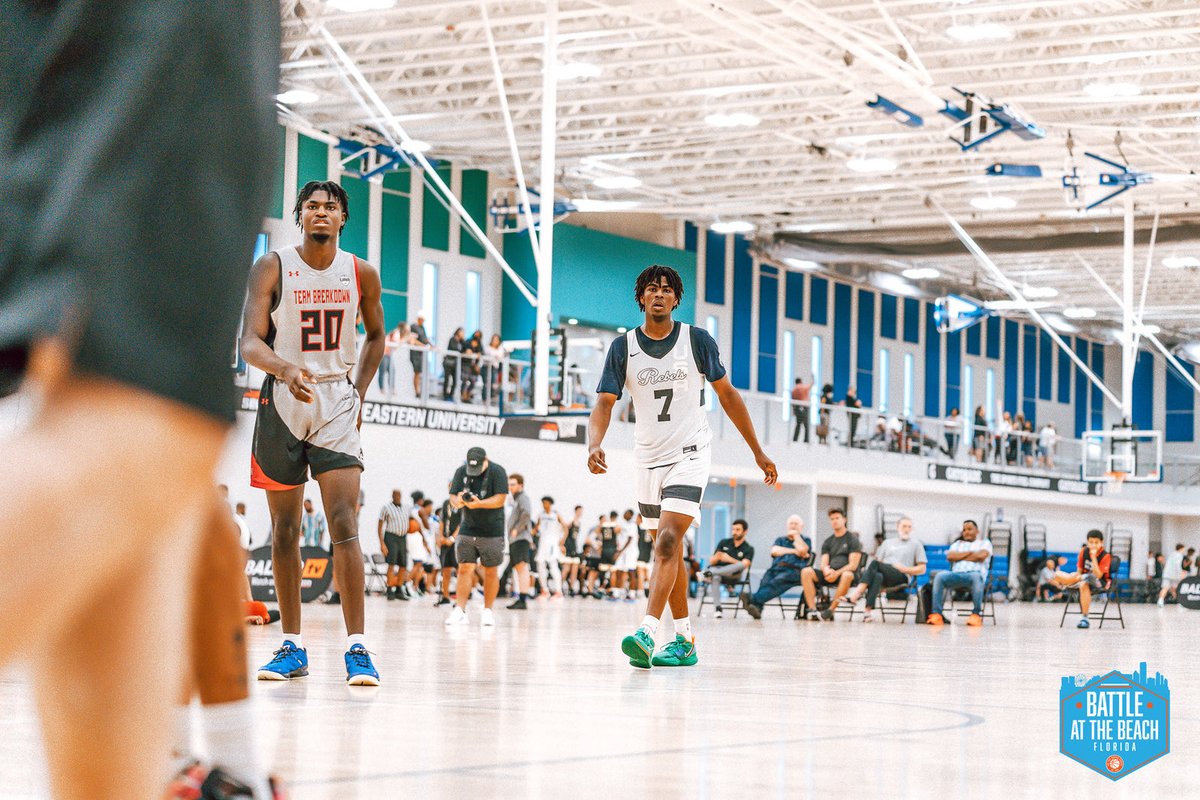 Dallas Jones, Team Breakdown 17U: A 6’4 wing out of The Rock School in Gainesville, this is the third different team we have seen Jones play for this spring.  Hopefully he has found a home with the Pink and Black.  Well-built with a strong frame, Jones often overpowers opponents when taking the ball to the basket and relishes contact around the rim.  Though his shot can be streaky from the perimeter, Jones makes enough of them, on both sides of the arc, that he must be respected by the defense.  A rugged rebounder on both ends of the floor, Jones has the ability to grab defensive boards and push the ball up the floor on his own.  He is also a determined and physical defender.

Marcus Allen, Florida Rebels 16U: The 6’6 sophomore wing from Miami Norland impresses a little bit more each time we see him play.  This weekend he was very effective scoring at the basket as he frequently beat the defense down the floor for easy points and also completed quick one & two dribble drives in the half court.  Allen is quick off the floor to grab missed shots whether it be opponents, teammates or his own.  He continues to display defensive versatility as this weekend he could be found not only jockeying in the post but also defending smaller perimeter players, both with a great deal of success.

Kameron Wright, 1 Family 16U: A wing from The Rock School in Gainesville, the 6’5 sophomore is a high-level athlete that rebounds, runs the floor and finishes well above the rim.  A good straight-line driver, Wright’s quick first step gets him past the vast majority of defenders.  Once at the basket, he can finish with either finesse or force.  Wright is no slouch as a perimeter shooter.  If he has his feet set and the defense closes out late or improperly, Wright will make the shot.  He has great value as a defender as Wright covers the floor quickly, anticipates well in the passing lanes, and uses his footspeed and length to bottle up opposing drivers.

Braylon Jackson, Team Breakdown 17U: A 6’5 wing from Oldsmar Christian, Jackson is a streaky lefty shooter.  If he hits a couple in a row, it does wonders for the rest of his game as it allows him to get defenders over-committed to his shot and Jackson can then get down hill to the rim where he is so dangerous.  With great body control and creativity, Jackson finishes a lot of plays in traffic that most can’t think of making.  Jackson pursues rebounds feverishly at both ends and is quick to get out in transition to get easy shots ahead of the defense.

Jaden Reece, Florida Rebels 15U: A 6’0 point guard out of Orlando Oak Ridge, Reece is the son of a coach and its shows.  He plays with a high basketball IQ and court savvy rare for a player just finishing his freshman year of high school.  Reece finds open teammates early and quickly gets them the ball.  A rarity in that he is a solid ball-handler and distributor but also a dangerous outside shooter, Reece makes deep threes off both the bounce and the catch.  An active and alert defender, he puts a lot of pressure on the basketball and makes it hard for the opponent to get into any kind of offensive rhythm.

Isaiah Campbell-Finch, Florida Rebels 15U: A 6’0 point guard from Tampa Catholic, Campbell-Finch has repeatedly shown success at playing either guard spot.  He is a solid floor general that makes good decisions with the ball on the move.  Campbell-Finch has good court awareness, makes tough shots in a crowd when driving to the basket, and makes open perimeter shots.  He too is solid on the defensive end as he is very alert to trap opposing ball-handlers but also gets back quickly to his defensive assignment if a steal doesn’t occur.

Lorenzo Cason, 1 Family 16U: The 6’1 sophomore from Victory Christian in Lakeland is known for his scoring prowess for his high school team but this time out he showed us a bit more on the defensive end.  He was very aggressive in guarding the ball, using quick feet and active hands to make things difficult.  Because of that, Cason forced several errant passes, got many tips, deflections and a few outright steals.  His jumper didn’t fall much in the game we watched but he found a bit more success in driving to the basket and earning trips to the foul line.

Koree Cotton, Team Breakdown 17U: A 6’6 lefty from Miami Southridge, Cotton is a good athlete that hits open perimeter shots, finishes well on the break, and has versatility as a defender.  He quickly gets prepared for his shot when teammates drive the ball and his defender helps off.  Cotton has long strides to get down the floor in transition and can finish either above the rim or with body control and touch if met with resistance.  His wingspan and lateral quickness allow him to defend smaller players on the perimeter and bigger opponents inside.  Cotton also rebounds his area well.

Patton Pinkins, Florida Rebels 15U: The 6’4 freshman from P.K. Yonge in Gainesville has deep range as a shooter but continues show that he has several scoring tools at his disposal.  He has some wiggle to his dribble and finds ways to slither around opponents to make shots inside.  Pinkins is under-rated when it comes to getting the ball to open teammates when his path to the hoop is cut off.  A surprisingly good rebounder for someone with such a lean frame, Pinkins puts in a solid effort on the defensive end of the floor.