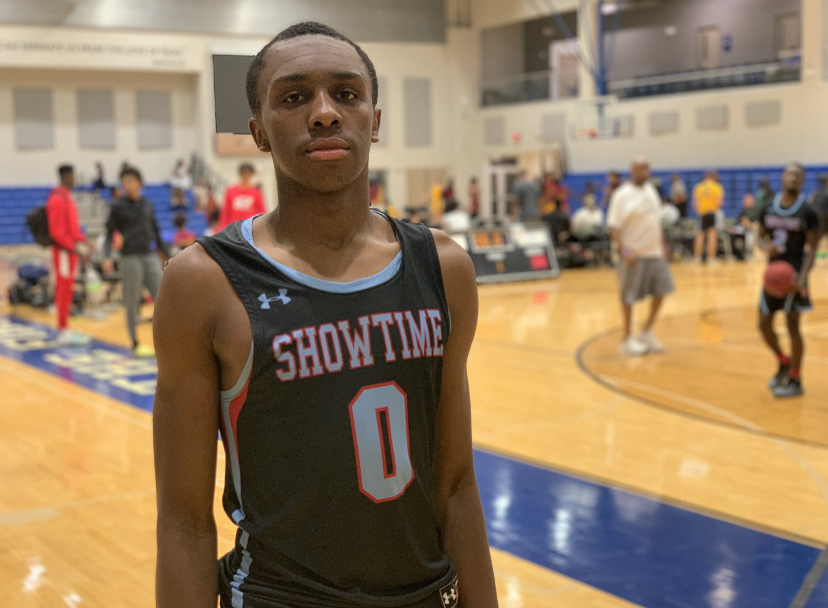 It is always a challenge to pick THE player for this category.  Every spring and summer, we come across players that either we had not seen play before or their performance was under-whelming when viewed in action with their respective high school team, but then “ball out” in a different setting.  These guys definitely fit the bill.

2023: Paul Djobet – Showtime Ballers:  A 6’7 wing that will be attending West Oaks Academy, Djobet played his junior season in Georgia and had a scoring average hovering near thirty points a contest when a knee injury sidelined him.  He missed all of the April live period and didn’t arrive on the scene until the Elite 32 event in Atlanta in July.  After gaining notice with Team Grind at that event, he moved over to Showtime Ballers for the Orlando Summer Showcase.  Despite playing at about 70-75% according to his coaches, Djobet demonstrated a superior skill level when it comes to shooting the basketball.  His range is deep, his mechanics spot on, and he is able to score from all three levels.  Djobet, a native of France, scores with either hand around the basket in a crowd, connects on floaters and mid-range jumpers inside the arc, and has the ball-handling skills to take his man off the dribble and finish with authority at the basket.  His wingspan is such that he can outboard bigger foes and he can grab the ball and go on the defensive end.  On that end, Djobet covers a lot of ground quickly, disrupts the passing lanes, and moves his feet well when guarding the ball.  As good as Djobet was at 70-75%, we are excited to see him at or close to 100% in the fall.

2024: Randy Smith – Miami Palmetto: The 6’3 guard was a revelation at the Florida Association of Basketball Coaches Team Camp in late June.  Against a quality opponent, he dropped in 42 points, going 10-14 from deep and 15-21 overall from the floor.  We had seen Smith during the regular season for Palmetto and we never dreamed he could produce like this.  With a solid frame and a hefty dose of athleticism, Smith is not just some catch-and-shoot specialist.  He is able to play well both on and off the ball, get downhill to attack the basket, and finish with authority over the rim.  Smith makes good pass vs shot decisions on the move and takes good care of the basketball.  Our understanding is that he played with Team Hardaway Jr. on the travel circuit this season.  Hopefully, we can catch Smith and the Miami Palmetto team this coming season.  While we certainly don’t expect a forty-burger every time out, Smith did set a high bar for future expectations.

2025: Cayden Boozer – Nightrydas: The 6’4 guard is NOT along for the ride!  While twin brother Cam deserves all the accolades he receives, Cayden is the straw that stirs the drink for the EYBL 15U Champions.  A pass-first but not pass-only point guard, Cayden quickly gets the ball where it needs to go.  He uses his strong frame well to ward off defenders, scoring thru contact and finishing with either hand around the basket.  Cayden excelled with the NIghtrydas squad on the EYBL circuit and also with his Christopher Columbus team during the “live” team camp period in June.  The Explorers headed west to Arizona and took on some of the best teams from that region of the country.  At the NBAPA Top 100 Camp in Orlando, Cayden was lauded by national scouts for his ability to guard the basketball and his well-rounded offensive skill set.  Cayden is already receiving heavy interest from big time programs.  While Dad Carlos is a Duke product, expect Cayden (and twin Cameron) to forge his own path.