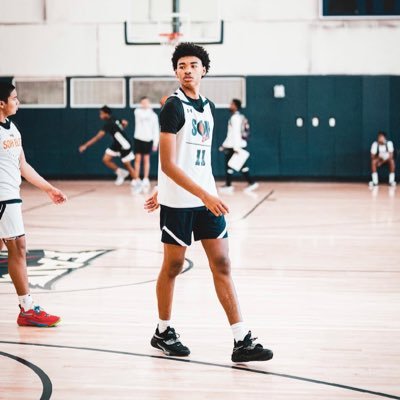 This is the category in which we highlight players that we either did not get a chance to see perform or played better than/less than expected and want to know if what we saw was real or a one-time thing.

2023: Cole Gingleski – Tampa Alonso: We expected to see the 6’10 big run this travel season with Team Breakdown.  However, various injuries kept him out of action.  When viewed during the high school season with Tampa Alonso, Gingleski impressed with his ability to control his rebounding area, challenge shots, and protect the paint without fouling.  We had looked forward to getting a look at how his offensive game had developed but we will have to wait until the fall for that to happen.  Gingleski may be one of those players that schools gravitate to late but whichever program lands him will be thankful they did.

2024: Ryan “R.J.” Jones – Gainesville The Rock School: The 6’8 forward sustained a knee injury early in the high school season and thus was not able to play in front of college coaches this spring and summer.  We can only hope that his rehab is going well and that come the fall he will be back to making an impact on the floor.  Jones was considered a top twenty-five player in the national Class of 2024 and he has still retained a relatively high national ranking despite being out of the spotlight.  A very athletic big that can stretch and run the floor, Jones’ ability to control the game in the paint at both ends of the floor was his calling card prior to his injury.  Hopefully that is still the case and that he has also been able to develop and hone some perimeter skills while getting back to where he was physically before the injury.

2025: Keron Jackson – Jacksonville Ed White: We were very impressed with the 6’4 wing’s play at the Spring Live Showcase and thought he was going to run with SE Elite this spring and summer.  However, he was Missing In Action, at least as far as the events we attended.  He has a lot of versatility, is a solid passer and scores well on drives.  Jackson is an active defender that is disruptive in the passing lanes and rebounds well for his size.  We had hoped to see more from him this travel season in terms of scoring from the perimeter.  Very athletic, Jackson has great upside and it is just a matter of him putting it all together in front of college coaches and national scouts for him to rise up the recruiting charts.

2026: Alex Constanza – SOH: Our understanding is that the 6’7 incoming freshman will be attending Westminster Academy in Fort Lauderdale this coming season.  While we did not get to see Constanza play for SOH’s 16U program, we did find some articles on-line from national scouts that made us more than a little intrigued.  According to those, Constanza is a solid athlete with a good skill level, rebounds and runs the floor, and can make shots from the perimeter.  He’ll be joining a very talented Westminster team where he won’t have to carry the burden of being “the man”, at least not yet.