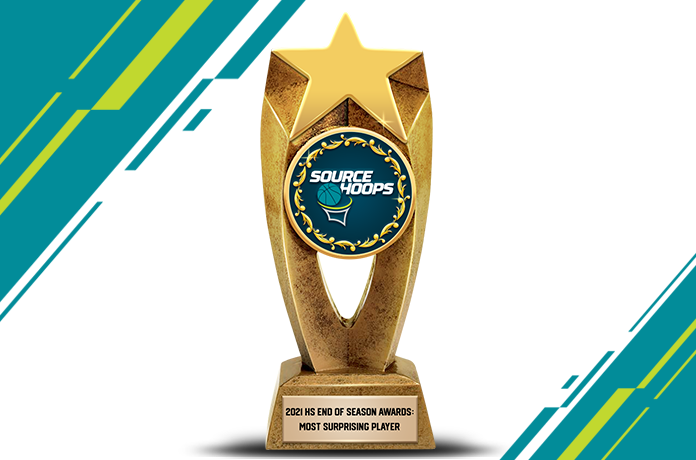 Zahariah Jones, Madison County: Madison County has become a small-school basketball power the past couple of seasons.  Coming into 20-21, it was unclear who would take on the mantel of Team Leader.  Jones quickly filled that role and did well, leading Madison County back to Lakeland.  Jones averaged nearly as many rebounds (13.7) as he did points (14.9) on the season.  Jones was pretty much a “one man gang” in the team’s semi-final game against eventual state champion Wildwood, scoring 21 of the team’s 41 points and hauling in 13 rebounds.

Aaron Jones, Fort Myers Evangelical Christian: We’ve seen the 6’7 Jones a couple of times over the past three seasons and thought of him as a solid high school player entering his senior year at Evangelical.  He soared beyond expectations in 20-21, averaging 28 points a contest, second in the FHSAA.  Jones showcased his offensive versatility, scoring from inside and out with consistent success.  He also put in work when it came to rebounding, grabbing just over eleven per game.  Arguably one of the best things about Jones’ game is the way he plays with energy and passion on every possession.

Dominic Nelson, Miami Archbishop Carroll: The 6’5 wing played in relative obscurity last year at TERRA Environmental despite averaging almost 18 PPG.  For his senior year, he transferred to Archbishop Carroll.  With a couple of other high-profile players alongside him, Nelson led Carroll to the regional finals while averaging 22 PPG for the season.  Long, athletic, and armed with a smooth perimeter jumper, Nelson was a tough cover.  He used his physical gifts to make an impact on defense as well as when rebounding the ball.  Nelson has the tools to be a solid collegiate basketball player.

Amen & Ausar Thompson, Fort Lauderdale Pine Crest: No, the 6’5 twins didn’t just “pop out of the woodwork”.  “The Boss” knew they were HM players at this point last year.  However, they were second-team all-area as sophomores and in a 2022 Class that is loaded with high D-I caliber wings, we didn’t feel like they had separated from the pack.  Now, the Thompsons are on a whole different level.  Last Summer they vaulted into the national top fifty rankings for the Class of 2022. They didn’t stop there as the twins led Pine Crest to a state title, losing only one game all season.  They have become “must see” this spring and summer for, not just college coaches, but scouts and fans alike.

Kolby King, Pembroke Pines Charter:  We remember King playing his first two seasons at Ely.  The 6’1 guard was a complimentary player and fit well within the Ely system.  With his transfer to Pembroke Pines Charter, the junior unleashed a game that had rarely been seen.  An aggressive player at both ends of the floor, King led Pines Charter to the state title.  He came close to a triple-double in the state semis, scoring 14 points, grabbing 8 rebounds, and handing out 8 assists in an overtime win.  In the final, he led five teammates in double figures, knocking in 27 points.  He has a great chance to elevate his recruiting stock this coming spring and summer.

Anthony Bittar, Tarpon Spring East Lake/Torrence Shellman, Hialeah Mater Academy: It was very difficult to pick between these two, and for very different reasons.  Bittar, a 6’4 guard, proved to be a scoring wizard for a very fun-to-watch (and very good) East Lake squad.  Whether dropping in threes, scoring on swooping drives to the basket, and delivering the ball to a teammate for an open shot, Bittar continuously made positive plays.  The 6’4 senior Shellman, on the other hand, likely averaged little more than six points a contest.  However, his ability to lock up opponents was nothing short of impressive.  His length, lateral quickness, and basketball IQ allowed him to defend a wide variety of opponents this past season for Mater Academy.  He was also dynamic away from the ball, grabbing boards in bunches and making it tough for the opposing offense to connect on entry passes.

Tyeree Bryan, Orlando Olympia: The Titans had their best season in several years and Bryan was a key part of it.  The 6’4 senior led the team in scoring at 15 points per game.  He got points by dropping in perimeter jump shots as well as when attacking the basket.  Bryan was lethal in transition and on lob plays in half-court sets as his length and leap allowed him to easily finish above the rim and over the opposition.  Defensively he created a lot of chaos with his ability to cover ground quickly and get his hands on the basketball.

Bryce Johnson, Oldsmar Christian: We caught the 6’5 senior’s act late in the season at an SIAA crossover event and left thinking he was vastly undervalued by the college coaching community.  He showcased not only a wide variety of scoring skills that day but also an ability to get the ball to teammates for quality shots and cause havoc on the defensive end of the floor.  An underrated athlete, Johnson will dunk ferociously on defenders if given the opportunity.