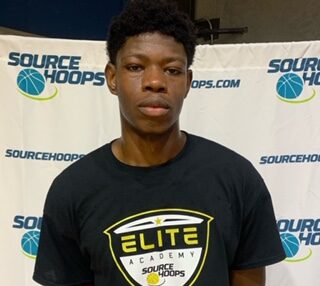 Jayden Hastings, Orlando Christian Prep: The 6’10 junior simply dominates in this type of setting.  He is too big and too mobile for most bigs to keep up with.  He doesn’t venture outside the lane much as he has developed a nice jump hook on the block.  However, Hastings did pop and drop a three during the contest which suggests he is preparing to add some variety to his offensive toolbox.  He excels at running the floor, finishing lobs around the basket, and pursuing offensive rebounds.  Defensively he is very vocal, owns the glass, and is an effective shot blocker.

Sam Walters, Montverde Academy: The 6’9 junior is highly thought of despite not getting a lot of floor time for the Eagles.  When he got his chance like he did Saturday, Walters really showed out.  He dropped in five threes in succession, each one with a rapid release.  He doesn’t need to catch, dip the ball, then rise up.  Once Walters catches it, he is quick to put up the shot.  When he wasn’t raining down threes, he was finishing above the rim in transition.  Despite a lack of strength and heft at this juncture, Walters is a good leaper with long arms that goes after rebounds both in and outside of his area.

Patton Pinkins, Gainesville P.K. Yonge: The 6’3 freshman already had a bit of a buzz surrounding him before the event.  His performance only served to legitimize the hype and raise the bar on his potential.  He impressed with his tri-level scoring skills.  Pinkins connected on shots behind the arc off the catch and the dribble, scored with touch in the mid-range, and completed tough scores in traffic when attacking the basket.  He appears to have a solid overall skill level and certainly doesn’t play like a freshman.  He is a competent ball-handler and passer that could see time at the point guard spot down the road.  Defensively, he has the physical tools to be disruptive.

Cole White, Montverde Academy: The 6’6 junior is a new name to us from the Eagles’ Nest.  Playing with a lot of energy and passion, White absolutely owned the glass at both ends of the floor.  Both quick and strong, he rises quickly in a crowd to grab missed shots and gets them back up and in quickly on the offensive end.  White is fast up the floor on the break and assaults the rim when given the opportunity.  His ball-handling skills need refining but he did put the ball on the floor and convert after a few one or two-dribble drives.  White connected on one of two three-point shot attempts in the game we watched.  His perimeter shooting development over the next year may likely determine his recruiting level.

Chandler Watts, Monteverde Academy: The 6’4 sophomore is a strong and athletic wing that terrorizes opponents in transition as well as bursts to the basket off the bounce.  His quick first step, physical strength, athleticism and body control allow Watts to creatively finish in a crowd at the rim.  It is a rare occurrence for him to unleash a perimeter jumper, but he did hit one of two in the game we watched, both with good form and follow through.  Defensively Watts covers a lot of ground quickly and is disruptive in the passing lanes.

Fredy Sylla, Jacksonville Potter’s House: The 6’7 wing got off to a bit of a slow start but progressed as the game went on.  He is most effective as a slasher, transition finisher, and offensive rebounder.  His perimeter shot wasn’t falling but the form and fundamentals are there for it to be a weapon down the road.  Sylla is a good athlete and has a high ceiling for development.  He plays against talented teammates in practice and in games against other SIAA teams.  His improvement is expected to be rapid.

Ben Ezeagu, Jacksonville Potter’s House: The 6’6 senior is a bundle of energy.  He is aggressive and plays hard on every possession.  Strong and bouncy, Ezeagu gets by more on his physical gifts than skill but he is definitely productive.  Quick off the floor, he puts back teammates’ misses with a vengeance and doesn’t stop leaping until the rebound is secured.  More often than not Ezeagu beats his man down the floor for easy transition baskets.  He did drop in a three and scored on a couple of quick drives, showing he’s trending positively on the offensive end.

LaThario Miller, Jacksonville Potter’s House: A 6’1 sophomore, the youngster was productive with the few touches he got in the up-and-down affair.  He did go 2-4 from behind the arc and also connected on a mid-range jumper off the dribble.  Miller also gets high marks for his ability to rebound the ball against bigger opponents and then quickly push it up the floor in transition.  Potter’s House has some promising bigs in their program and it will be up to guards like Miller to get the most out of them to make noise in the very tough SIAA.