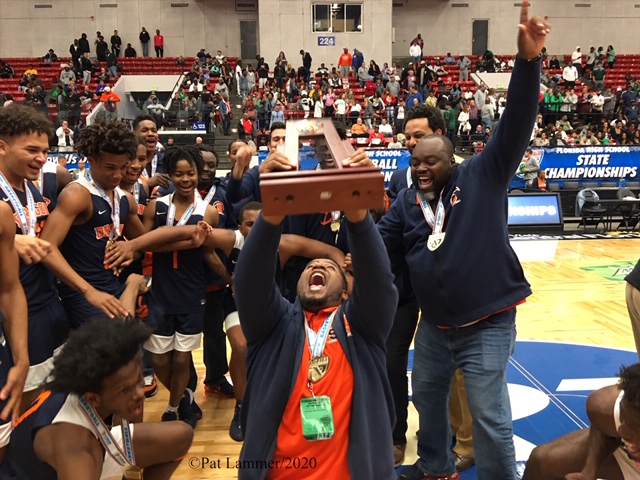 LAKELAND — Chayse Culpepper and Inady Legiste said they had something to prove in their senior seasons.
Sure, Stranahan had won a Class 6A state championship last March — the first in school history.
But were the Mighty Dragons here to stay to among the state’s elite?
“They doubted us,” Culpepper said. “They’ve been doubting us all season. But we stayed positive.”
Saturday, the 6-foot-1 Culpepper (pictured below) scored 19 points to lead four Mighty Dragons in double figures as Stranahan went back-to-back with a 71-64 victory over Tampa Catholic in the FHSAA Class 4A state championship game at RP Funding Center. 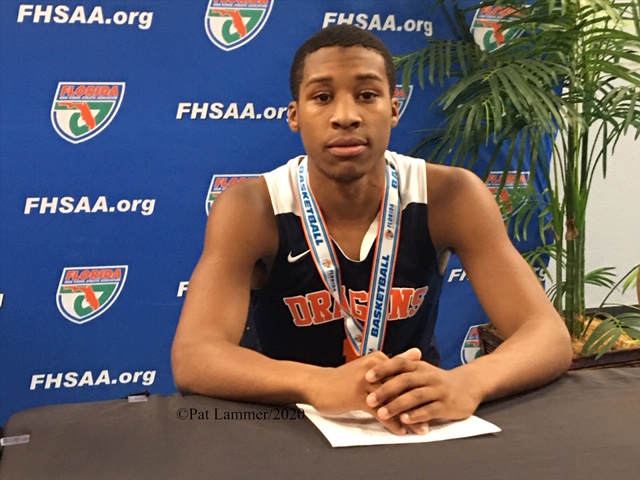 Stranahan caps the season at 24-9 while Tampa Catholic (26-6) lost for the first time since Jan. 4 vs. Scotlandville, La.
The unsigned Culpepper finished 5 of 11 from the field and 9 of 15 from the free-throw line. He also grabbed seven rebounds and had four steals.
Legiste added 16 points and secured eight rebounds, while junior Thaddeus Squire contributed 15 points and Houston Culpepper 13.
“I wanted to end my career on top,” said Legiste.
Tampa Catholic grabbed a 19-16 advantage after one quarter and took its biggest lead of the game at 38-27 on a 3-pointer from Derrick Mitchell with under a minute left before halftime.
But Stranahan (24-9) turned the tide in the second half by picking up its man-to-man defense and “bogging down” the Crusaders.
The Mighty Dragons went from down 11 to up 7, 57-50, on a Daquion Vickers dunk with 5:52 remaining in the game.
Four points (59-55) would be as close as Tampa Catholic would get the rest of the way.
Morehead State recruit Johni Broome led the Crusaders with 20 points, 10 rebounds and 3 blocks. Kobe Knox added 14 points. Knox is also a senior — TC starts five 2020s.
Tampa Catholic was held to 22-of-51 shooting and 6 of 26 from 3-point land. The Crusaders turned the ball over 21 times.
“If any of you were here for the last five years just duplicate my speech,” said Tampa Catholic coach Don Dziagwa, who has brought his program to five consecutive final fours. The Crusaders lost in the state title game in 2017 and 2020.
“Hats off to Stranahan,” Dziagwa added. “They really took it to us in the second half.”
Stranahan had to play without 2020 athlete Dave Herard, who tore an ACL in the regional final. Herard is going to Virginia on a football scholarship.
The state championship brought a happy ending to a tough past year for Stranahan coach Terrence Williams.
“It feels great,” Williams said. “Again, yesterday I was saying I lost my mom in the summer time. These guys were with me when I got the news in the car. For me, I just had to keep everything in this whole season. These guys were pushing me and at times I was down and I was out. Couldn’t really find the right focus at the beginning of the season.”
Saturday, Williams guided his Mighty Dragons back to the top of the mountain.
If you have high school or travel basketball news, you can reach Pat Lammer at PatALammer@Gmail.com
Tags Chayse Culpepper Daquion Vickers Don Dziagwa FHSAA Inady Legiste Johni Broome Kobe Knox Stranahan Tampa Catholic Thaddeus Squire