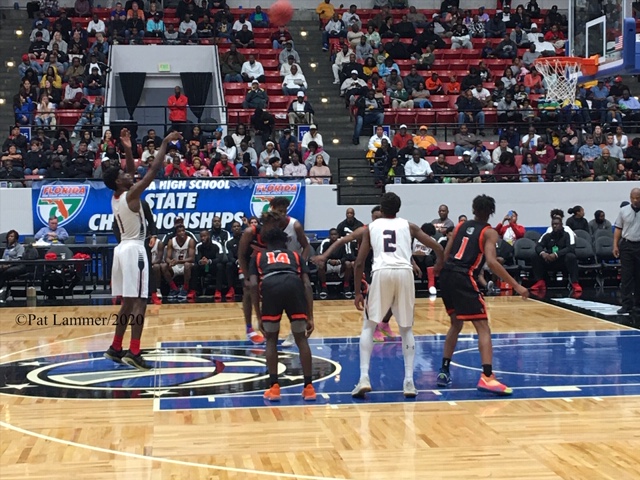 Source Hoops’ Pat Lammer was in Lakeland for the 2020 FHSAA Boys State Basketball Tournament. He will be unveiling All-Tournament teams — one per day — for all seven classes Class 1A-7A. Here is the seventh and final installment:

Unless you have been at the Miramar High practices, you probably have never heard of 6-foot-4 senior Michael Lott. He averaged 5 points per game. Lott, however, kept Miramar in its semifinal upset victory over Orlando Oak Ridge. He led the Patriots with 14 points, 6 rebounds and 3 steals in that one. In the state championship victory over Sanford Seminole, Lott grabbed 20 rebounds (17 on the defensive end), scored 8 points and had 2 assists. For the tournament, he made 10 of 12 shots from the field. That should get the attention of college recruiters.

The 5-10 senior guard scored 22 points in the state championship loss to Miramar on 8-of-14 shooting to go along with 6 rebounds and 3 steals. Baker, who is headed to Tennessee-Martin on a football scholarship, had 16 points, 9 rebounds and 6 steals in Seminole’s semifinal rout of 28-3 Forest Hill. Baker finished 13 of 25 from the field at the final four.

The 6-6 sophomore star (pictured) poured in 25 points on 8-of-14 shooting from the field and 9 of 12 from the free-throw line in the championship game victory over Seminole. Jean-Charles also had 8 rebounds in the title game and helped the Patriots hold Seminole to 2-of-15 3-point shooting. He battled foul trouble in the semifinal victory over Oak Ridge but contributed 4 points and 4 rebounds. For the tourney, Jean-Charles shot 10 for 18 from the field.

Perkins, a 6-1 senior guard, lit up Forest Hill in the semis for 24 points (9-of-20 shooting), 5 rebounds and 4 steals while helping hold the Falcons to 23-of-70 shooting. He hit double-digits with 10 points in the state championship loss to Miramar. Perkins posted 7 steals in two games.

The 6-6 James, who has offers from the likes of Oklahoma State, Texas A&M, USF, FAU and Wake Forest, put up 27 points in the semifinal loss to Miramar. James shot 8 of 12 from the floor — including 4 of 6 from 3-point land — and hit 7 of 8 at the free-throw line. He went down late in the game with a leg injury but coach Steve Reece said it was not a serious knee injury.