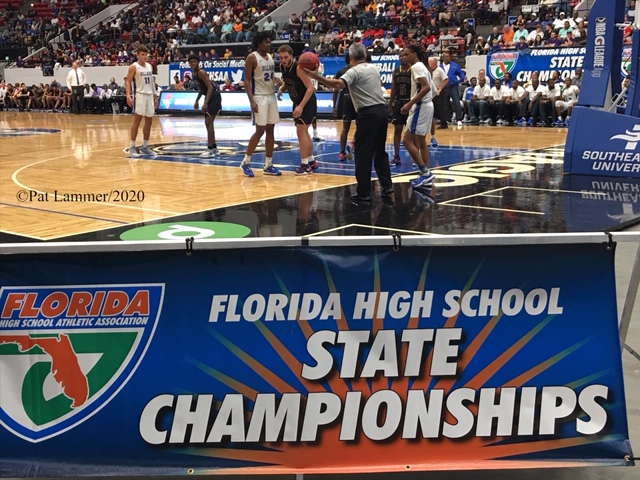 Source Hoops’ Pat Lammer was in Lakeland for the 2020 FHSAA Boys State Basketball Tournament. He will be unveiling All-Tournament teams — one per day — for all seven classes Class 1A-7A. Here is the sixth installment:

The 6-foot-3 forward scored 12 points, had 8 rebounds and 2 steals in the state championship OT victory over Fort Lauderdale Dillard. Defensively, Simons & Co. forced Dillard into 21 turnovers and held 2020 Jalen Haynes to just 3 field-goal attempts. Simons went for 16 points, 14 rebounds and 3 blocks in the semifinal win over Tarpon Springs East Lake. Simons shot 10 for 20 from the field at the final four and was a major problem for opponents, getting to the free-throw line for 12 attempts.

In the semifinals, Reynolds canned a game-tying shot in the waning moments vs. Lake City Columbia that was the most-scrutinized play of the tournament. He had 15 points, 8 rebounds, 4 assists and 2 steals in 37 minutes, 48 seconds of the two-overtime semi. Reynolds played 36 minutes in the championship game OT loss to Bartow, finishing with 7 points, 6 rebounds and 4 assists. He shot 7 for 15 at the final four.

The talented junior guard put up 21 points, 9 rebounds, 8 assists and 3 steals while helping hold Murray State recruit Dionte Blache to 1-of-8 3-point shooting in the semifinals. Clayton, plagued by foul trouble, contributed 8 points and 8 rebounds in the state championship victory over Dillard.

The 6-1 senior guard was exceptional at getting into the lane vs. Dillard in the semifinals. Gaines scored 24 points, including drilling three 3-pointers and hitting all 5 free throws, and played all 40 minutes of the double-overtime contest. Running mate Darrien Jones had 20 points and also played all 40 minutes.

The 6-2 senior posted 18 points, 5 rebounds, 4 steals and 3 assists in 35-plus minutes in the state championship loss to Bartow. Mack had 12 points, 2 steals and 2 assists in the two-OT victory over Columbia. Mack got to the free-throw line for 16 attempts at the final four, making 12.