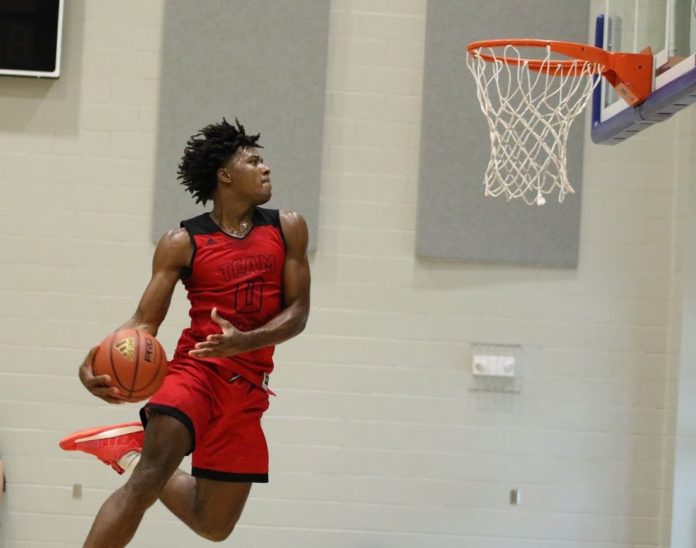 Another season of travel basketball is in the books.  As is our custom here at the Source Hoops Hacienda we hand out multiple awards in various categories for the rising senior (2020), junior (2021) and sophomore (2022) classes.  The first category is Most Valuable Player.  We define that as the player who was most instrumental in leading his team to success.

Arguably the most consistent performer this spring and summer, 6’5 Kario Oquendo of Team Parsons performed at a high level at every event of national status.  He was named All-Tournament at the Atlanta Jam, Bob Gibbons’ Tournament of Champions, and the Best of the South, where he led Team Parsons to a combined record of 18-2.  Not only was he named All-Tourney, but each time out Oquendo was considered a top three player in attendance.  Oquendo was very impressive at the Grassroots Summer Showdown.  His combination of strength and powerful explosiveness to the basket proved too much for opponents to slow down, let alone stop.  What has sent him apart is his improved ability to knock down perimeter shots.  That no doubt has brought a few more high-major programs to the table in regards to his recruitment.

The Florida Vipers were the only Florida-based team in the 16U Under Armor Association this year.  The squad went a solid 8-4 during the three UAA sessions and reached bracket play at the UAA Finals in July.  Leading the way for them was 6’4 Michael Trigg.  The combo guard averaged just over 20 points a contest over the three spring UAA sessions, hitting an astounding 62% from the floor and 46% from beyond the arc.  In the UAA finals, he led the team into bracket play and upped his scoring average to nearly 21.5 points a game, which led the 16U division.  After leading his Seffner Christian team to the state title game in 4A, Trigg showed again that he is a winner by elevating the Vipers to great success in the challenging Under Armor Association.

At the 15U level, it can be difficult to gather information on players and their performances at events.  Thankfully, the Peach Jam provided box scores for games played at all levels.  Those box scores revealed a lot about how E1T1 made a run to the semi-finals in that event.  Emmanuel Sharp, a 6’3 combo guard, had games of 30, 19, 42, and 31 points, leading a talented team in scoring each time out.  Not only did he score at a high rate, Sharp did so efficiently, averaging 48% from the field overall and 37% from beyond the arc.  He also shot a ridiculous total of 50 free throws in those four games, connecting on 41, a greater than 80% clip.  We saw him with his high school team at the FABC Team Camp in Bradenton and noted his ability to not only score but take care of and distribute the basketball.