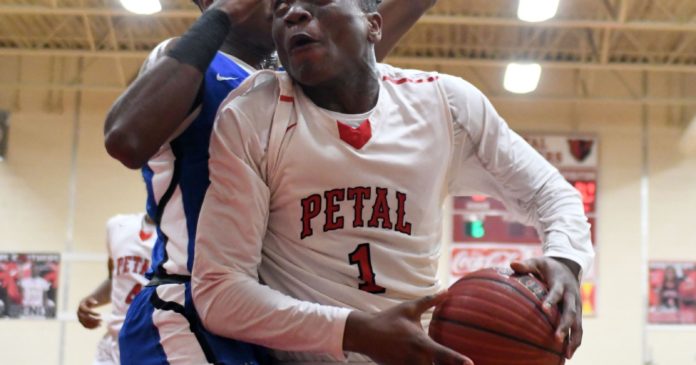 The buzz surrounding this contest is Joe Girard, New York state’s all-time leading scorer after just three years of high school.  He averaged over fifty points a contest last year and is committed to play for Syracuse in the fall of 2019.  Petal is not to be dismissed as they are a solid program out of the Magnolia State loaded with athletes.

Petal scored first on a putback by Don Avila.  Girard responded for Glens Falls by hitting two of three free throws after being fouled on a shot from beyond the arc.  Avila scored the next five for Petal while Girard hit a three in transition to make the score 7-5 in favor of Petal.  Caleb McGill of Petal converted a three point play then Avila again scored to make it 12-5 in favor of Petal with 3:38 to play in the quarter.  Girard responded with one of two free throws and a three to get back to within three at 12-9.  Marcel Blackwell scored from mid-range to push Petal’s lead but from that point Glens Fall outscored Peta 8-2 -over the rest of the quarter to lead by one at 17-16.

A three from Trenton Girard of Glens Fall upped their lead to four at 20-16 to open the second quarter.  However, that would be their highlight from the quarter as Petal would hold Glens Falls scoreless for four plus minutes while going on a 14-0 run, highlighted by consecutive threes from Landyn Shows to lead 30-20 with 3:25 left in the half.  Kyle Vachon of Glens Falls would finally end the skid with a bucket inside but for a few possessions the best Glens Falls could do was trade baskets with Petal.  With 1:20 left in the half and Petal leading by nine at 35-26, Petal ran off seven straight points to go up by sixteen.  A steal and score by Girard ended a woeful half for Glens Falls with the score 42-28 in favor of Petal.

Four quick points by Petal to start the third made things look even more dismal for Glens Falls.  However, they didn’t quit.  They put together an 8-0 run as Nick Danahy scored twice inside, Trenton Girard finished a drive in traffic and Joe Girard connected on a pair of free throws to get Glens Fall back to within ten at 46-36 with 4:31 to play in the third.  McGill of Petal answered with a pair of buckets inside put Glens Falls took advantage of their momentum.  They used an 11-5 run, highlighted by a three from Trenton Girard to make it an eight point, 55-47 game with one quarter to play.

In the fourth, Glens Falls was still in the contest, down seven at 59-52 after a pair of free throws from Joe Girard at the 6:38 mark.  Petal then slammed the door shut with an 8-0 run to push the score to 67-52 with 4:47 left in the contest.  Glens Falls would get no closer than twelve the rest of the contest and Petal would advance with a 78-56 victory.

McGill led Petal with 27 points, most on the inside.  Blackwell added 20 while Avila put up 18 points and Shows connected for 11 points.